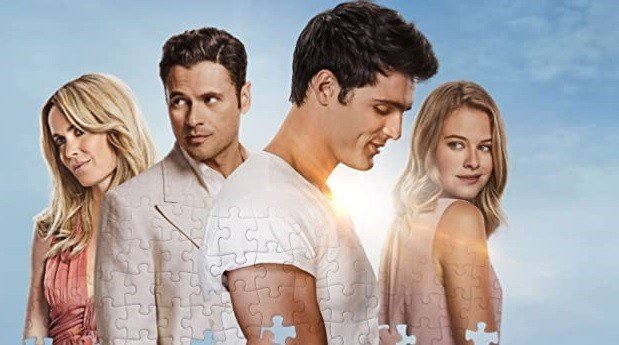 The hospital gurney that shows up mere minutes into “2 Hearts,” — carrying one of its four protagonists and trailing a wake of weepy loved ones behind it — telegraphs that the story we’re about to see is a medical tear-jerker, the nature of which will not be hard to guess, given the clumsy hints that are sprinkled throughout its early scenes. A voice-over delivered by that patient, a young man named Chris (Jacob Elordi of “The Kissing Booth”), admits as much. “I’m getting ahead of myself,” Chris tells us, just as he’s about to tip his hand, before backing up to deliver two parallel love stories: his own, and that of another, much older man, Jorge (Adan Canto), taking place many years earlier.

Based on a true story, “2 Hearts” jumps back and forth in time between Chris’s meet-cute, as a dumb but hunky college freshman, with a fellow student named Sam (Tiera Skovbye), and the romance between Jorge, the wealthy scion of a Cuban distiller, and Leslie (Radha Mitchell), a flight attendant he sweeps off her feet. Neither of these relationship narratives is especially engaging — or even very convincing. Chris and Sam bond while serving on a collegiate safety patrol; Jorge and Leslie fall in love during a romantic weekend getaway to an expensive beachside hotel. Both stories feel pretty plastic, like TV commercials for breath-freshener or tooth-whitener. They’re sweet and superficial.

But they’re not meant to be the meat of the movie, whose two threads start to converge — in expected ways, despite a time-wasting plot feint — pretty quickly.

Inspired by the life of Jorge Bacardi of the Cuban rum dynasty (whom I advise you not to Google if you want to retain a modicum of suspense) and what has been described as a “miracle” he experienced in 2008, the film comes from Freestyle Releasing, the distributor who brought you “God’s Not Dead” and “Left Behind.” It’s wholesome but starchy fare: a story of sacrifice and good fortune that feels less like a movie than a marketing vehicle for the power of divine providence.