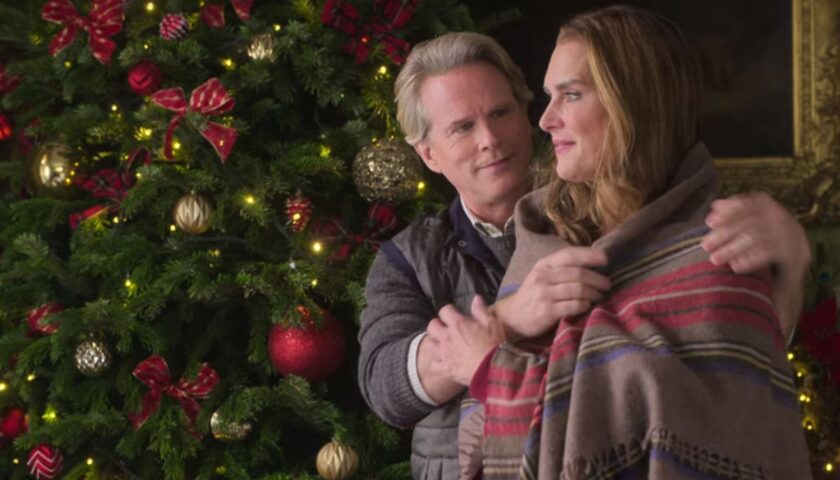 The holiday season, with its festive spirit and joys of Yuletide, certainly lends itself to a healthy dose of sentimentality. Some might call it ‘schmaltz’, some might call it ‘cheese’, but there’s something to be said for the lazy-Sunday-afternoon-fun of a proper Christmas rom-com. This year, it’s Netflix and director Mary Lambert’s A Castle for Christmas under the sparkly wrapping paper, sending us to glorious Alba for the ‘most accurate depiction of Scotland ever seen on screen’. (Netflix’s bold statement, not ours.)

Sophie Brown (Brooke Shields) is a best selling author, whose latest book has caused quite a stir. Desperate to escape the criticism and mobs of upset fans, she takes a last minute trip to Scotland, to visit the castle her father’s family lived and worked on as groundskeepers. By now, Dun Dunbar Castle has fallen into some disrepair and is up for sale. Sophie, if she believed in such things, falls in love at first sight and sets out to buy it and reclaim her Scottish roots. But current owner, grumpy Duke of Dunbar Myles (Cary Elwes), is unenthusiastic about handing over the keys, and makes Sophie’s experience as unpleasant as possible. But his attempts to get rid of her inevitably work towards bringing them closer together.

Firstly, let’s address the elephant in the room. This is, by no means, the ‘most accurate depiction of Scotland ever seen on screen’. And yes, it’s just a bit of fun and was undoubtably said with a tongue firmly in a cheek, but it will grate on Scottish audiences. At least, it certainly did to this one. Firstly, the geography. Landing in Edinburgh airport, Sophie is picked up by a ‘Highland Taxi’ – tartan, of course – and driven to Dunbar. Sounds fair enough, but Edinburgh airport isn’t in the Highlands and neither is Dunbar. In fact, it’s a town about 30 miles east of Edinburgh in East Lothian, and quite a bit south of the Highlands (give or take 180 miles). Her taxi driver, Eamon (Antony Strachan), uses phrases like ‘far aboots de yi bide’, ‘far yi fae’ and ‘nae bather’, sounding distinctly doric and traditionally from the North-East of Scotland. Again, some 100+ miles from East Lothian.

Now, you might be saying, does this really matter? And the answer, probably, is no, but when combined with a rousing ceilidh band sing-along rendition of ‘Loch Lomond’ on what appears to be a normal night in the pub, a character inexplicably wearing a kilt in every scene and a disregard for accurate accents, – try as he might, Elwes’ effort misses the mark at times, albeit it isn’t the worst – it does play into the cliché stereotype that, whilst aiming for ‘fun’, ends up being a bit tired.

But casting aside that, the film itself is fine. It’s funny, although whether that’s always intentional is another matter, and the leads are game to commit to the cheesiness of it all. Elwes and Shields have decent chemistry, and the small community captures that saccharine Christmas cheer so hard it near enough makes your teeth crack. And Lambert really leans into the nostalgia and magical nature of a literal castle at Christmas. It’s a fun, if infuriating, slice of Netflix’s veritable festive feast of films of its ilk.

A Castle for Christmas isn’t breaking any boundaries, following rom-com tropes pretty much to every letter, but works as it is intended: a romantic romp that passes an afternoon as the weather gets gloomy. If the Scots can put aside their bug-bears, it’s a relatively inoffensive, light-hearted film that isn’t taking itself too seriously. All in all, very much in the spirit of Christmas.