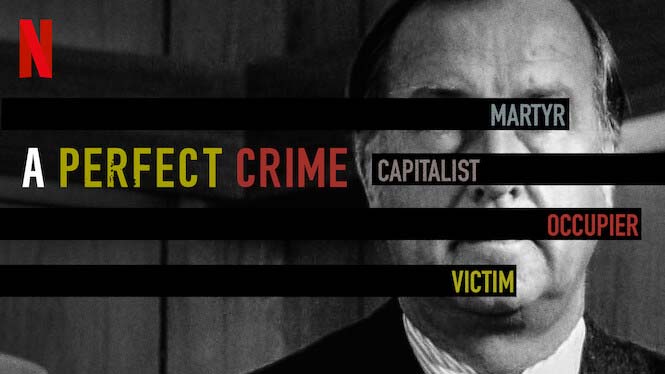 A Perfect Crime is a Netflix docu-series about the unsolved assassination of German capitalist business tycoon Detlev Rhowedder, that is presented in vain of Errol Morris’ groundbreaking film “The Thin Blue Line” (and replicated in a new docu-series based on his book “A Wilderness Of Errors”).

Rhowedder was the head of the Hoesch corporation in West Germany, from which he was selected to oversee the privatization of state-owned companies in the GDR for the Treuhand during the reunification era.

It was during this, that he was assassinated by sniper fire in his office on the upper level of his home in Dusseldorf.

A crime that remains officially unsolved to this day, despite the fact that a letter was left behind at the scene of the shooting, attributing responsibility to the (3rd generation of the) radical left wing militant organization known as the Red Army Faction (RAF).

To quote Errol Morris (from “A Wilderness Of Errors”), however…”What happens when a narrative takes the place of reality?”.

This is a question that is both pressing and pertinent to the case at hand, even though no definitive conclusion can be arrived at, because of it’s convoluted nature.

Although no answer can be definitively determined, the series does offer 3 plausible explanations for who was behind the attack.

The 3 potential scenarios put forward are as follows:

1) the RAF was responsible, with the actors being Wolfgang Grams and his accomplice Brigit Hogefield.

2) a cabal of disaffected former-Stasi carried out the attack and made it look like the RAF was responsible (though, this would entail believing a hair was planted, in a time before forensic DNA technology could be used to determine an identification).

3) a group of hired assassins were acting at the behest of West Germany and it’s allies, in order to fashion Rhowedder as a martyr, as a means of smearing and quelling protests in the East (which it effectively did); while also removing him from the equation (in order to cover up for millions of missing dollars that were stolen by members of the West German government; and prevent him from publicly revealing the scandal…for he had recently told the Minister of Finance Haigel and Chancellor Kohl that he was planning to quit the Treuhand, before they encouraged him to stay on).

Here are the facts:

All of this occurred amidst mass protests in East Germany, as 40-50% of the population had become unemployed as a result of economic restructuring that Rohwedder was overseeing (under Minister of Finance Haigel and Chancellor Kohl) for the Treuhand. This is a higher unemployment rate than was seen during the great depression, and leading up to the rise of hitler.

94% of East German companies were seized and sold off to West German and/or International Interests…only 6% of previously state owned companies remained in the hands of East Germans, after restructuring was complete.

The West Germans were lining up to buy fully operational companies at bargain basement prices, while a large portion of the populace was out of work, and the formerly communist state was flooded with new commercial goods that the out-of-work population was being goaded into purchasing.

Hence, the country was still very much divided, and on the brink of civil war.

As forensic DNA technology improved, it was used to identify Grams as being the source of the hair left at the scene of the shooting.

After being identified, the police infiltrated the 3rd generation of the RAF’s ranks and initiated an operation at the Bad Kleine railway station in order to capture Grams.

However, they ended up murdering him (with fraudulent claims that he had shot at them first)…this was followed by a cover up during which evidence failed to be collected, evidence (like Gram’s jacket which was to be tested for gunshot residue in Switzerland) mysteriously disappeared, and false testimonies were presented.

This is put forward (alongside the aformentioned reasons above), to suggest that the West- who, conveniently, had many former Nazis among their political ranks- was behind Rhowedder’s assassination, and that they were responsible for blaming the former-Stasi, in the media.

Refutations against the RAF being responsible include claims that they couldn’t have made such a professional shot, and that the scene was “designed” to mislead by being a combination of either too professional or too amateur (depending on who you ask).

A good portion of the first episodes are dedicated to suggesting there was no 3rd generation of the RAF at all, rather, that it was a stasi operation designed to frame the RAF.

The Stasi had previously given exile to a number of 2nd generation RAF members, when their cell had fallen victim to the police.

Testimony from a couple 2nd gen RAF actors is used to entail this.

Though, the doc limits their inclusion to this commentary.

The rest of the film is mainly based around the testimony of high ranking west german politicians and police…who clearly have beliefs, or an agenda they are trying to uphold.

So in the end, you are left to decide for yourself- based on the presented evidence and contradictory claims.

My only beef is that the overall analysis is slightly narrow.

For example, it does not investigate the other actions attributed to the 3rd gen RAF, like the embassy shooting…which would provide helpful context to conclude whether they did in fact exist or not.

Furthermore, they do not provide any analysis concerning why GDR companies were performing so poorly (as a result of intervention by anti-communist forces, like sanctions and trade embargoes).