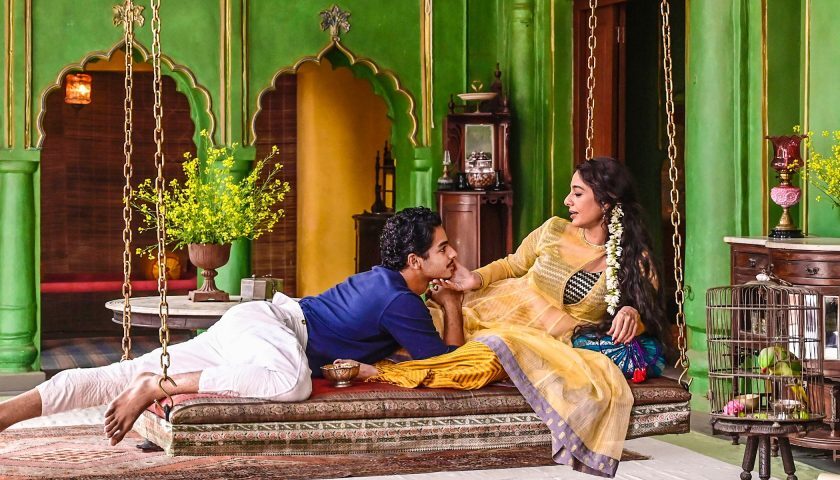 As with most Indian weddings, especially in the newly independent India of the 1950s, it’s an arranged marriage that’s more about the merger of two families than about the individuals. Lata Mehra (Tanya Maniktala), the sister of the woman getting married, isn’t particularly interested in all that; she’s studying literature at the local university and feels that modern times should allow her to pursue a career. Of course, her mother, Rupa (Mahira Kakkar), wants her to follow in her sister’s footsteps.

In the meantime, the groom’s brother, Maan Kapoor (Ishaan Khattar), is even more of a rebel in his family. Not only does he not want to get married, but he actively and publicly courts whoever he fancies, whether it’s his buddy Frioz (Shubham Saraf) or an older singer of some ill-repute named Saeeda Bai (Tabu). When it comes to Saeeda, he aggressively pursues her after hearing her sing, and the two of them quickly fall for each other.

At school, Lata has a “meet cute” in the school library with a young man named Kabir Durrani (Danesh Razvi), though she purposely refuses to get his name, in order to play hard to get. They get to know each other by attending poetry readings at the university, and Lata is starting to enjoy her time with him, especially his “life is short” attitude. She asks her friend Malati (Sharvari Deshpande) to find out about him, and she comes back with bad news: He’s Muslim, something that Lata’s Hindu family will never allow. Lata has to decide whether to follow her heart or her family’s traditions.

While all of this is going on, dissention is roiling in Brahmpur; a Hindu temple is being built very close to the mosque that’s been in town for decades, and it’s generating peaceful protests that are being greeted by a violent response from the state’s home minister and the police. Maan’s father, Mahesh (Ram Kapoor), the state minister of revenue, tries to tell the home minister that the small police force he has protecting the mosque is not enough, but the home minister not only resists his pleas, but wants to push the fact that India is a Hindu country, not a Muslim one.

From the costumes to the colors to the local settings, Nair and Davies capture the beauty of India’s Bengal region in their adaptation of A Suitable Boy. The first episode is a visually-arresting look at how the traditional met the modern in the first years of an independent India’s existence. And, while the first episode doesn’t get a complete handle on the sprawling scale of the book, the show has a tone that’s lighter than most shows of this scope, which helps the episodes move along at a good clip.

As we get introduced to the Kapoor and Mehra families, it takes us some time to sort out who goes with whom, but by the time we get to the end of the episode, that is much clearer, especially as we get clarity on where Lata’s and Maan’s stories are going to go.

Maniktala is charming as the determinedly independent Lata, especially how she keeps Kabir at arm’s length not only to protect herself, but project the confidence she so obviously has. She doesn’t need a man to define her, which is why she doesn’t want to get married, and we see that confidence in Maniktala’s performance, especially in a radiant smile that projects vulnerability along with that confident demeanor.

On the other hand, Khattar effectively projects Maan’s impulsiveness and romanticism, something that’s not exactly considered favorable, especially in a family that’s helmed by a government minister. He’s impulsive enough to dunk the home minister in the fountain because it’s Holi, and pursue Saeeda, despite the reputation she has. While he’s as confident as Lata, it’s different confidence, born from rebellion more than anything else.

While we would have liked to have seen more of their stories in the first episode, we do see snippets of things from other parts of the two families that are intriguing. One of them is Menakshi (Shahana Goswami), the wife of Lata’s older brother Arun (Vivek Gomber), who not only decides to meltdown her late father-in-law’s college medals to make earrings but may or may not be conducting an affair behind her husband’s back. We’ll be eager to see how things play out in what is supposedly the stable family of the oldest Mehra son.
What also intrigues us are the issues roiling the newly-independent India as all of these family issues are going forward. Muslims are leaving for the newly-created country of Pakistan, leaving the remaining ones at the mercy of the Hindu population. Peaceful protests turn deadly, mainly from state aggression. How these issues invade the lives of the Kapoors and Mehras will make A Suitable Boy a whole lot deeper than just a story about forbidden romance.