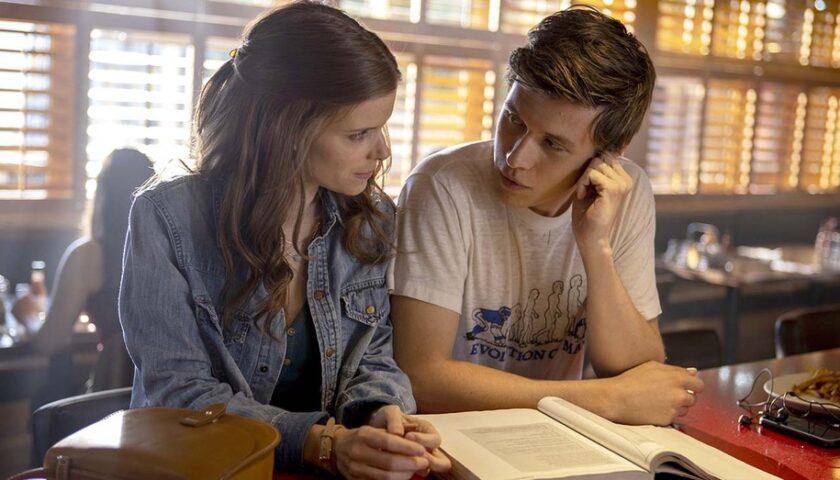 Kate Mara and Nick Robinson play a teacher and a student caught in a sexual relationship in FX on Hulu’s drama.

Hannah Fidell’s 2013 feature debut, A Teacher, is a miniature portrait, practically a locket picture. Visually cramped, clammily atmospheric and undeniably underwritten, the 75-minute film — about a female high-school teacher (Lindsay Burdge) in a sexual relationship with one of her students (Will Brittain) — isn’t anyone’s idea of a slam-dunk adaptation source, grossing just over $8,000 during its theatrical run. Indeed, it’s taken Fidell six years, since a TV version was announced for HBO in 2014, for her miniseries to make it to the screen, now for FX on Hulu. This time, Fidell’s canvas is far larger.

The 10-part half-hour series is a triptych, with two time jumps lending some longitudinal heft to its story of trauma, abuse and their lasting aftereffects. And to Fidell’s credit, this A Teacher isn’t a stretched-out “five-hour movie” of her original vision, but a miniseries that feels much more fleshed-out and thought-through, with surprisingly little overlap between the two projects. That the #MeToo reckoning took place between the film and the TV series is relevant here; the later work is much more interested in the ways abuse doesn’t always feel like abuse to either the perpetrator or the victim. It can feel consensual. It can even feel like love.

Kate Mara takes over as the titular character, a married teacher in her early 30s named Claire. “Rage against the dying of the light,” she reads to her English class from the classic Dylan Thomas poem, catching the attention of senior Eric (Nick Robinson), though she really intends that line for herself. The resignation with which Claire approaches her impending parenthood with her husband (Ashley Zukerman) — because that’s what grown-ups are supposed to do — is heavy and palpable.

One of the trickiest challenges for Fidell and her writers — though there’s no shortage of them — is to make believable, if not sympathetic, this disastrous choice by a slightly idealistic but mostly ordinary woman. It’s among A Teacher’s smarter feats that there’s not a single inciting event, but a confluence of pressures both lifelong and recent that make Claire’s decision to respond to Eric’s initial unwanted kiss with anything other than a total shutdown seem understandable.

Eric, too, is a mostly normal kid — though like many teenagers, he’s preoccupied by the small differences between himself and his friends. The eldest son of a single mother (Rya Kihlstedt), the 17-year-old Texan is more sensitive and ambitious than his dudebro buds, but, like Claire, he’s more interested in fitting in than figuring out who he is outside of people’s expectations for him. His side of their relationship is less complicated, but eventually more heartbreaking. Eric comes into his own as a character after news gets out about their romance — or what feels like a romance for both parties — and he’s genuinely anguished that classmates and strangers only see Claire as his predator or his conquest. The last thing he wants to be is “a legend,” especially for something that nobody, including himself, fully comprehends.

In perhaps her richest role ever, Mara makes for a compelling lead, her usual coldness finding a fitting vessel in a character in need of warmth and uncomplicated adoration. Robinson has decent enough chemistry with Mara, but there’s an additional layer of depth missing that, say, Normal People’s Paul Mescal was able to telegraph much more readily in a recent and largely similar role.

A Teacher slowly ramps toward a confrontation between Claire and her formerly alcoholic father, and Mara and M.C. Gainey make that slow buildup pay off. Meanwhile, Grace Gummer is memorable in a small part that serves as a reminder that Eric isn’t the only person undone by his confusion over a relationship, as is the always welcome Dylan Gelula in an even tinier role that offers some dark comic relief.

A Teacher gets better the further along it goes, especially in its final four episodes, as the relationship between Claire and Eric starts to take its toll. Shot with a suburban naturalism and paced steadily if unhurriedly, the preceding chapters are arguably more interesting in retrospect, after the revelations of the finale, than in the actual watching experience. Each episode begins with an advisory card about the show’s “sexual situations as well as depictions of grooming,” but that warning belies the impressive psychological subtlety that Fidell is striving for.

A Teacher is a fascinating post-#MeToo tale not because Claire is a monster, but because she can’t conceive of herself as one. Not sleeping with one’s students is Teaching 101 and she knows that, but she can’t fully see — or take responsibility for — her ballooning mistakes. She’s been telling herself a story about herself since childhood, and there’s no space in that story to admit the possibility of her replicating in any way what’s been done to her. Until it’s too late.