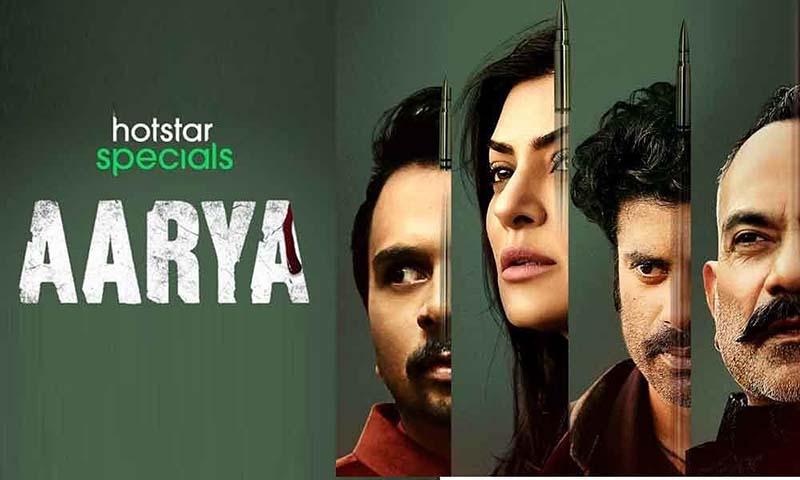 Pehele Dhanda mard sambhaalte the, ab bache nahi hai,” says Aarya Sareen (Sushmita Sen) in the new Hotstar Original web-series, Aarya. The show, based on Dutch series Penoza, starts on a light-hearted note with the Sareen family having breakfast on a pleasant morning and getting ready for what the day holds for them.

Aarya, a homemaker has all that she could ever wish for – a loving husband (Chandrachur Singh), three adorable kids, lavish bungalow, and whatnot! Adding to her happiness is the upcoming wedding of her younger sister, Soundarya (Priyasha Bhardwaj). Aarya’s domestic bliss comes to an end when her husband, Tej Sareen, is shot in broad daylight right outside their home. It is now up to the homemaker to protect her children from a ruthless drug lord who will stop at nothing to get back the money that the family owes him, and also to find out the man who shot her husband. To make matters worse, there is ACP Khan (Vikas Kumar), from the Narcotics Enforcement Bureau who is keen on finding more about Aarya’s “family business”.

The “business” involves selling of opium-mixed medicines along with regular ones and is run by Aarya’s brother Sangram (Ankur Bhatia), Tej and their friend, Jawahar (Namit Das). When the men of the family are in no position to handle their business, Aarya takes up the daunting task on her shoulders.

Aarya is a dramatic, intense and thrilling ride that will keep you hooked right from the first few minutes. It isn’t easy holding the viewer’s attention in the digital space because there are too many options available, but this is one show that will make you want to click on that ‘watch next episode’ button. The show is divided into nine episodes, with each one being at least 50 minutes long, moving at a comfortable pace. The director is in no rush. With a sharper edit, however, these episodes could have been reduced to 40 minutes each, cutting out the sequences that weren’t really needed. Certain scenes might raise a few eyebrows. And others might feel unnecessary.

Still, Ram Madhvani (director of 2016 super-hit Neerja) knows how to keep the viewer invested. And succeeds yet again.

One thing that stands out in Aarya is the artistic portrayal of pain. Be it the paintings on the walls, composing poetry or a little kid hiding inside his tent to chase the demons in his mind away, pain is expressed in such a manner that it becomes impossible to not feel it along with the characters. The credit goes to the actors as well, of course, but to the writer of those scenes mostly. Some of the sequences in Aarya are very well-written. The artist inside of you will be satisfied when you watch the show.

The highlight of the show is the ‘Breaking Bad’ moment when Aarya finally takes charge and stands up to the man who had been threatening her all this time. If you have watched Breaking Bad, you can’t help but think of the scene where Walter White dons his black hat for the very first time on the show. We wish there were more of such moments.

Overall, the screenplay is neat and well-executed. The characters are well-written and begin to grow on you as the narrative moves forward. The sub-plots are smartly integrated into the main story towards the climax. There are various twists and turns that you won’t see coming. And that is exactly how they should be placed.

The show ends on an intriguing note, making us eager for the second season already.

Coming to the performances, Sushmita Sen makes a powerful digital debut and it is great to have her back on screen after a long gap. Her captivating persona and impeccable acting chops make her the perfect choice to play a character like Aarya. Even when she uses a cuss word, she does it with such finesse that you can’t help but admire her. Welcome back, Sush. We missed you. And those spot-on eyebrows of yours.

Chandrachur Singh is endearing as Tej, the perfect husband. Ankur Bhatia and Namit Das do full justice to their roles as Sangram and Jawahar.

Sikandar Kher as Daulat Ram, Aarya’s confidant, and Maya Sarao as her childhood friend are spot on.

Vikas Kumar is flawless as the determined ACP Khan. Manish Choudhary as Shekhawat and Vishwajeet Pradhan as Sampat also give compelling performances.

The background music is noteworthy. Though it gets a little tiring to hear the old songs being played while something important is unfolding on the screen. Remove the repetitive old songs from the background score and it would have been perfect. The cinematography had room for improvement since the exotic architecture of Rajasthan and the royal vibe of the city seems to be missing from the show.

The costume designers and make-up artists have done a fine job and deserve a mention. The wedding costumes especially were a delight to look at.