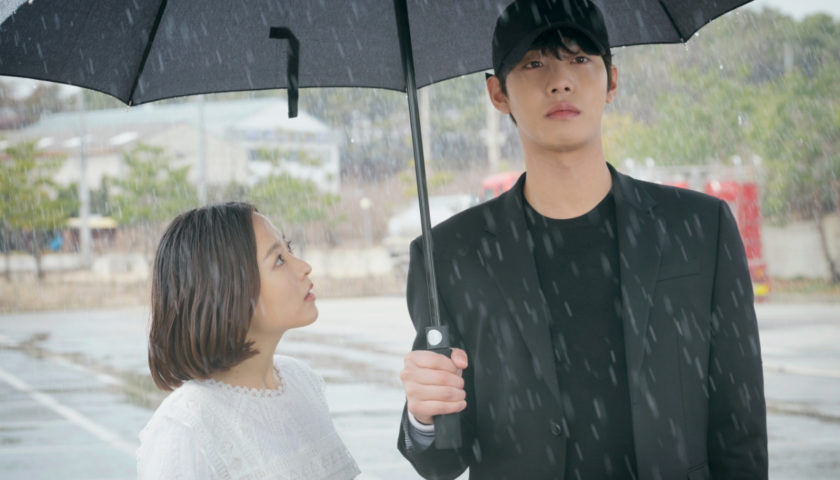 Review : I was wondering when Netflix was going to release a weekly, 2-day South Korean series. I’ve missed immersing myself into a weekly format I’m not familiar with. Memories of the Alhambra feels like a distant memory. A new series has dawned, Abyss, which is rolling a variety of genres into one story.

A lot happens in Abyss Episode 1 to establish the setting. Probably too much. It opens up with Cha Min (Hyo-Seop Ahn) accidentally nearly killing himself, after changing his mind about committing suicide at the top of a large building. He is tragically upset over his ex Hee-Jin, who left him before the wedding. As the wind blows him off the ledge, and he holds on for dear life while trying to ring his friend Se-Yeon (Bo-Young Park), some form of energy smashes him into the sky, and the series does it cheesily, as you can see him spinning into the stars.

Abyss Episode 1 then pushes us along a timeline: 24 hours before Se-Yeon’s death. She is keen on investigating a homicide despite knowing the victim. Her colleague is wondering why Cha Min is getting married when he flagrantly loves her. Her colleague seems more interested in her than the actual job in hand.

The opening episode then reverts to Cha Min, who appears dead on the floor with a spirit looking over him. Two people emerge from the sky, and they use an energy ball that turns out to be called an Abyss, which apparently can bring any dead person back to life. The two people explain to him that he was reborn, but they say it casually, like they do not mean it. Cha Min looks different; before his ex-partner dumped him for being ugly, but it turns out his soul, that was above him while dead, is way better looking than him; this is his new life now. This series is going to be bonkers, isn’t it?

Abyss Episode 1 then turns from sci-fi/fantasy into comedy, as Cha Min has to lie to his mother about who he is and pretend he is a best friend of her son. His first concern is Hee-Jin, and he keeps trying to contact her despite her number being out of service – if I were dumped for being ugly, my last concern would be my ex at this point.

Abyss Episode 1 then switches back to Se-Yeon’s timeline, and she’s digging deeper into the homicide case, while her colleague looks suspiciously concerned. She also accidentally comes across the new Cha Min, not knowing who he is, but is instantly attracted to him.

Anyway, moving on to the later stages of this frankly crazy pilot of Abyss, after a night’s worth of drink, Se-Yeon rings Cha Min for hangover cures; I’d like to add that I’ve experienced this type of friendship before with a romantic acquaintance, and it’s honestly the most irritating situation ever. On the way to Se-Yeon’s house, he finds a man collapsed in the street, so he tries to use the Abyss, but he believes it hasn’t worked. Once the ambulance arrives, the dead man has disappeared.

Cha Min finally arrives at Se-Yeon’s house, but she is not answering the door, so leaves the hangover cure on the steps. The next day we learn that she has been murdered, and because he did not try entering the house, he thinks guilty.

For some strange reason, the police want to speak to Cha Min; he’s the first suspect, and they are calling him a stalker on the news. It feels like a bigger stitch up than Steven Avery. He has to keep evading the police despite looking handsomely different. He attends Se-Yeon’s funeral and becomes distraught, drawing out the Abyss and begging for it to work. When the funeral staff leaves the room with the casket, Se-Yeon is sat upright.

Outside, the different looking Se-Yeon speaks to Cha Min in the rain; he’s unaware that it’s the love of his life. Se-Yeon causes a commotion when she witnesses her funeral and tries to stop it, and this is where Cha Min understands what is happening, and pulls her aside.