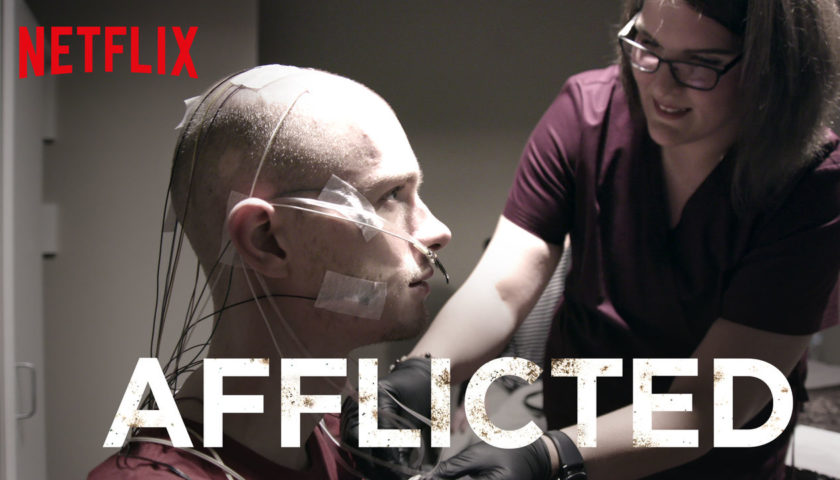 Review: Right from the opening scene it’s clear that Afflicted is a medical documentary series unlike any other. Following the extraordinary unknown diseases crippling seven different people across America, Afflicted follows the daily struggles of each of the affected individuals who are at breaking point, desperately seeking a cure for their condition. From chronically fatigued, bed-bound Jamison to Carmen’s extreme reaction to photosensitive light, Afflicted is an eye opening, unbiased look at some of the stranger and more unusual diseases hiding on the fringes of known medical science.

Whether you believe the diseases these individuals suffer from are real or not, there’s no denying that each of them are suffering and it’s very easy to empathise with the majority of the people. Bekah’s extreme reaction to mould sees her forced to live in the hot, choked desert while New Yorker Pilar has extreme sensitivity to chemicals, forcing her to live away from her husband. These cases are so extreme that it’s very easy to become alienated from their way of living which in turn could lend itself to scepticism. It would be very easy to go into this one with an air of cynicism and there will inevitably be those who view this as attention seeking or even these people acting like a hypochondriac  – we simply are not acclimatised to answer the question of whether these diseases are made up or, more likely, outside the realm of known medical science. Afflicted is certainly a documentary that challenges these ideals and is all the stronger for it.

Through a combination of face to face interviews with loved ones, text overlays and real-time footage of the various individuals as they go about their lives, Afflicted jumps between the different characters and their loved ones as they seek in vain to find some help and alternate treatment. As the series progresses, each of the individuals confront their own fears for the future and face scepticism from medical professionals. The face to face interviews with psychologists and scientists are a nice touch though and do help to balance the show out with some much needed perspective.

As a personal gripe, the only individual here that seems a little off-kilter to the entire series is Carmen. While her story is no less believable than the other individuals that make up this surprising series, a combination of sketchy mannerisms and extreme compulsion toward the disease hanging over her does give off an air of disbelief during her scenes. It’s a minor gripe though and for the most part, Afflicted does well to hold your attention throughout the seven episodes.

Whether you’ll enjoy Afflicted or not really boils down to how open you are to new and unheard of diseases. While the series certainly ends on a somewhat hopeful and inspirational note, there will inevitably be those that finish this with an air of uncertainty and cynicism. If you can look past some of the more outlandish ideas and understand that when it comes to medical science we just do not know everything, Afflicted is all the more enjoyable to watch. Each of the seven affected individuals are empathetic and easy to root for and you may well find yourself willing these guys to get better and get back to a state of normality. Afflicted isn’t perfect and a few of the stories aren’t as compelling as others but Netflix once again challenges your perceptions with this thought provocative and oftentimes alienating documentary about unknown diseases.