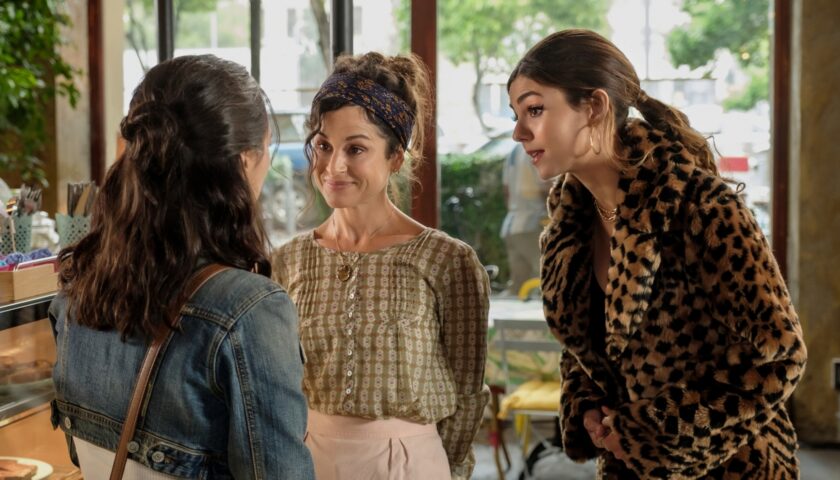 Here we are, just sitting and waiting for Victoria Justice to die, so I’ll do away with the suspense and let you know that she’s in a hungover stupor and stumbles and hits her head on the toilet and that’s it. It’s probably not quite the glamorous death Cassie envisioned, considering she’s a glamma-slamma party girl who works as a party planner and goes WOOOOOO all the time like everyone does while partying at parties. It’s her 25th birthday and there she goes, WOOOOOO, doing shots with her glitzy friends while standing on top of the bar, a scene that alienates her roommate and bestie since first grade, Lisa (Francis), who’s more of a reserved, quiet type. I mean, Lisa works at the museum, dusting off dinosaur bones, and she’d rather sit around and do a puzzle with her pal than get blasted and go WOOOOOO. The wild part-ayyyy scene precipitates a falling-out between them, and they part on cruddy terms, then Cassie comes home to their apartment that looks like the set of a sitcom and dies. WOOOOOO INDEED. WOOOOOO.

But what comes after for Cassie isn’t just a blankness, void of memory and sensation. Of course it’s not! What kind of movie do you think this is? She wakes up and meets her guardian angel, Val (Robyn Scott), who explains the movie’s high concept: This is the In-Between, a place for croaked people who have unfinished business, which probably means everybody who ever lived ended up there, right? The movie isn’t interested in THAT, so it just gets to Cassie’s conundrum. Val shows her how she died, and Cassie’s response is, “Did that go viral?” Sure, LOL away, but this girl’s obviously gotta get her priorities straight. Val hands her a list of people with whom she needs closure, a concept that I’m convinced is pretty much a myth, but let’s soldier on anyway. There’s Lisa of course, and Cassie’s dad, who she took for granted, and her long-estranged mother, who left the family when Cassie was young. She’s got five “Earth days” to make shit right or else she’ll burn for eternity in hellfire, or at least that’s my interpretation of these plot implications.

Easier said than done, since Cassie’s a ghost and nobody can see or hear her, allowing her to spy on everyone as they talk to themselves in extended soliloquies like totally normal people who aren’t in movies do all the time. Except one day she’s hovering over Lisa while she sleeps and hums a tune that makes her manifest upon the mortal plane, prompting the following conversation: “You’re not here — you died!” “Yeah, that sucked.” Maybe it’s worth noting that in the reality of the not-yet-dead, a year has passed since she ate it. With time ticking away into the vast and uncertain future, Cassie gets down to business: She’s gonna help Lisa connect with the kewwwt British guy next door (Timothy Renouf), and try to inspire her to chase a coveted promotion at work. Then Cassie’s gonna shake her dad out of the funk he fell into after she died, and hopefully reignite his interest in yoga. And then she’ll do something about her mother, whatever that might be, but it’ll be something for sure. It looks like this sitch will require more than just pat solutions, then? Yeah, no, maybe, but THERE WILL BE CRYING, or else.

OK, so Cassie’s dead, now what? Afterlife of the Party is perfectly fine if you overlook its overly idealistic assertion that closure is attainable and that life isn’t a series of loose ends that we just need to learn to live — and die — with. But, par for the course for movies that are TV-PG flufforamas aimed at youngish audiences who want to see former Nickelodeon star Victoria Justice play a perky character who says funny things, it isn’t interested in exploring the depths of existential light and darkness. No, Cassie will be a bubblehead for eternity, although one must credit the film for allowing her to be a few microns deeper at the end of the movie than she was at the beginning. Some progress is better than no progress, right? Sure.

I’m willing to concede the point that Justice and Francis exhibit some chemical-besties charisma and charm, although the movie sure seems interested in exploiting only the bare minimum of their capabilities. Only a fool would fire this up expecting a profoundly moving story in which a vacuous personality goes on a soul reclamation project and emerges a changed person, truly changed and ready for whatever Kingdom Come throws at them. No, the movie’s true goal is to generate some laughter and lukewarm Hallmark schmaltz before wheeling in the lachrymosity, but let it be known that it at best inspires a tear or two at gunpoint, and not an ugly-cryface release. It’s no weepie, it’s a dinglebrained comedy, only frequently and not totally witless. So no surprises here, zilch, nada, all expectations met and cliches fulfilled, move along, move along.