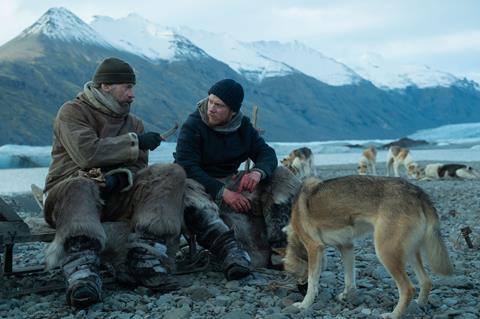 An unusual expedition here for Netflix, unusual less for the nature of the expedition itself and more for the ambition of it, a rare film for the streamer that allows us to travel with characters to a real location, a world away from green screens and sound stages. It shouldn’t be quite this much of a unique selling point but in the age of modestly budgeted fare crafted for the smallest of screens, the sheer on-the-ground expanse of old-fashioned survival adventure Against the Ice immediately separates it from the many other films landing, or most often crash-landing, on the platform.

It’s a vital separation from its contemporary streaming peers as when compared with the big-screen films that have come before in this particular genre, it’s a familiar tale told robustly but with very little distinguishing flair. It’s a passion project for the Game of Thrones alum Nikolaj Coster-Waldau, who both co-writes and stars as the Danish explorer Ejnar Mikkelsen, but this passion is mostly restrained on screen, a polite, by-the-numbers story of men fighting the elements that should satisfy those seeking a simple, sturdy throwback drama. Those hoping for anything extra will leave feeling a little cold.

It’s the true story of the Danish expedition to Greenland in 1909, one to disprove the American claim to the north-eastern territory based on a belief that it was broken up into separate pieces of land. Captain Mikkelsen (who in real life would have been just 29 at the time, a slight stretch for the 51-year-old Coster-Waldau) is following in the footsteps of an ill-fated prior attempt, aiming to recover the bodies or discoveries of the men who came before them. To make the final trek, he must leave his crew on the ship and brave the extremes, a 400-mile round trip that will require a partner. The only volunteer is mechanic Iver (Joe Cole), inexperienced but eager, and so the two set out, aware that they might never come back.

But while the characters might be risking life and limb to trek into uncharted territory, it’s a familiar route for the rest of us. It’s a mostly enjoyable one, though, not quite as gripping as it could have been given the intensity of the situation, but charged with just about enough forward momentum to keep us onboard. The film’s most effective moments are those that teeter on the brink of catastrophe, an uneasy tension born from the knowledge that in a place such as this, death is always just one false move away. And it’s not just from falling off the edge of an icy verge or into freezing water (pushed by a rather shoddy-looking CGI bear), but also from ruined or lost supplies, injured or killed snow dogs, the constant fear that something is about to go wrong and then all might be lost.

Adapted from Mikkelsen’s posthumously published book (which means we’re never completely in the dark over where we’re headed), Against the Ice is a Danish story flattened for a global audience. The decision is made for characters to speak in English with a variety of regional British accents, a slightly jarring sacrifice to increase eyeballs that, for a story all about an ambitious country trying to make strides to end a debate of who-owns-what with another, makes it feel a little confused. There’s a similar lack of specificity with much of the dialogue which at times feels too simplified and at others, far too modern (were people in 1909 really asking others to go for a “walk and talk”?).

Like many of his Game of Thrones co-stars, Coster-Waldau has mostly struggled to find his groove outside of Westeros and while he’s far too old to be playing Mikkelsen (the dramatic shift of watching someone in their late 20s v early 50s grapple with such responsibility is huge), he makes for an adequate lead, tasked mostly with tersely reacting to bad things happening. The last act pushes him into hallucinatory mode, to try to bridge the gap between home and away, which makes for a mostly unconvincing lurch to the finish line. But it’s an otherwise satisfying end to the kind of journey that we’ve taken many times before and will most likely take again. Perhaps next time it might even be one to truly remember.