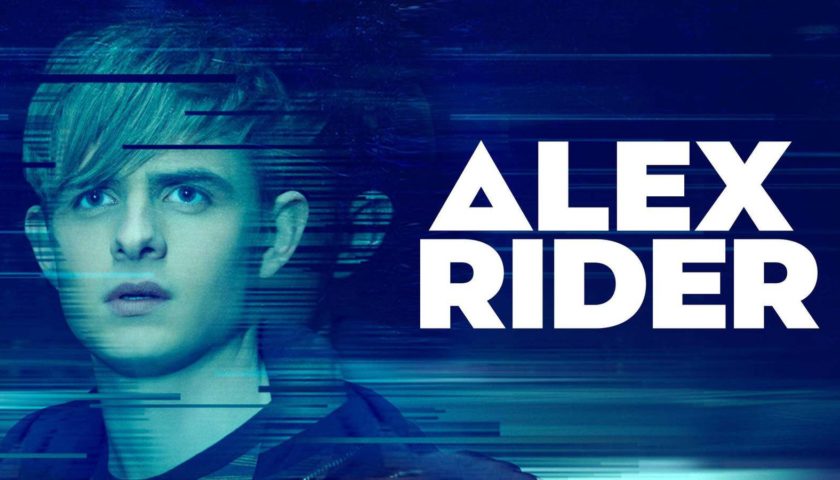 The Alex Rider books have been going strong since the year 2000, entertaining young readers with high octane adventures that follow the teenaged Alex Rider as he becomes recruited by the British Secret Service to tackle missions across the globe. I grew up on them, as I’m sure many others of my generation did, and the series is still going, with the latest novel published in April. They deliver on the promise of being a teenage James Bond-esque series, packed with gadgets and high concepts that are equal parts silly and exciting.

The series was adapted for the screen once before in 2006, with the ill-fated Stormbreaker, starring Alex Pettyfer as Rider. Arriving at a time where every studio was looking for their equivalent of the Harry Potter franchise, the franchise hopeful tanked at the box-office and is has been dismissed by some for an overtly goofy tone, despite it’s all-star cast featuring the likes of Mickey Rourke, Bill Nighy, and Alicia Silverstone.

Following in the footsteps of His Dark Materials (whose failed film adaptation, The Golden Compass, also came out in 2006), the property has turned to the world of TV in the hope of finding more success for Rider on screen. Similarly, it also goes for a darker, moodier tone that aims to place Rider in the real world before taking him out on his first adventure. Is it a more successful approach? The answer is yes, for the most part.

The debut season decides to adapt the second novel of the series, Point Blanc, as its starting point, only bringing a few elements from Stormbreaker over into this reboot, seemingly to avoid too many comparisons. It’s a smart move, as the plot of Point Blanc also offers a more organic plot that would require a teenager to become a spy.

Following the death of his Uncle and guardian, normal schoolboy Alex Rider finds out that his Uncle was in fact a spy for the British government, who was murdered whilst investigating the mysterious private corrective academy, Point Blanc, located high in the Alps. Having discovered the truth of his Uncle’s work, Alex is recruited to infiltrate the school and find out just what is going on up in the mountains.

The tone of the Alex Rider TV show is markedly different from the film, and even the books themselves. It is a stripped-down version; it is not too bothered with gadgets, over the top action sequences, nor is it particularly quippy. It’s Daniel Craig to Pettyfer’s Roger Moore, if you will. The show and its creators are more focused on the atmosphere and in establishing Alex as a fairly normal kid thrown into an extraordinary situation. It’s a tone laid down in the first episode, which very sets the look, firmly establishing itself as an espionage drama with its cold blue colour grading and mysterious meetings in abandoned warehouses.

Alex himself is not as ridiculously multi-talented as he is in the books and previous film adaptation. Clearly a little older than the 14-year-old in the novels, this Alex sneaks out to house parties and struggles to talk to girls, all the while planning classic cinema marathons with his best friend Tom (Game of Thrones’ Brenock O’Connor, having a lot of fun). Sure, he knows Krav Maga, but he’s otherwise quite a relatable teen, with a solid and sensitive performance from Otto Farrant selling Alex as a kid who is both very capable, but also one who is conflicted with his decision to step away from a more ordinary existence. The casting and characterisation of Alex is perhaps the most crucial element of the show, and it is one that it gets right.

The moodier atmosphere that’s established from the off carries over (and, if anything, grows) across the whole series, particularly as the action moves to the Point Blanc academy, where a creeping sense of paranoia takes over as Alex digs into the strange means of correctional programming going on at the school. It means that it all feels quite ponderous, lacking much in the way of thrills and opting more for establishing an unsettling mood. There comes a point where you begin to wonder who the series is designed for; the older fans or the current younger readers?

The persistently darker tone means that the more over the top elements do start to feel like they’re being taken too seriously, particularly as it becomes clear that the show is more concerned with atmosphere than it is action beats. Which is all well and good, but the story itself feels a bit too stretched out, struggling to create enough intrigue to fill just eight episodes. The action does pick up in the final two episodes, meaning that the series ends on a note that is more fun and exciting, but there’s definitely a point in the middle where thrills are severely lacking.

Alex Rider the TV show is a better adaptation of the material than Stormbreaker was 14 years ago. It has a very strong cast, boasting a  number of faces from various high-end British TV, from Stephen Dillane as the icy Alan Blunt to Vicky McClure as the more conflicted spy Mrs. Jones. Its younger cast is also very strong, with the aforementioned Farrant and O’Conner standing out, along with an impressive turn from rising star Marli Siu as a new character written for the show, a character that will hopefully come to play a part in the future of the series.

The darker tone certainly feels like a smart move on paper, but it does mean that the show sometimes forgets to have a bit more fun along the way. It struggles to maintain your interest over the course of eight episodes, with a plot that ends up feeling thinner than it did on the page. If it is lucky enough to move forward with another series, it could do with lightening up the tone to prove more appealing to its younger fanbase, particularly as it goes on to adapt the more outlandish plots of the follow-up novels. But it is a promising new beginning for the teenage spy and one that fans of the series should welcome with more enthusiasm than the last time.