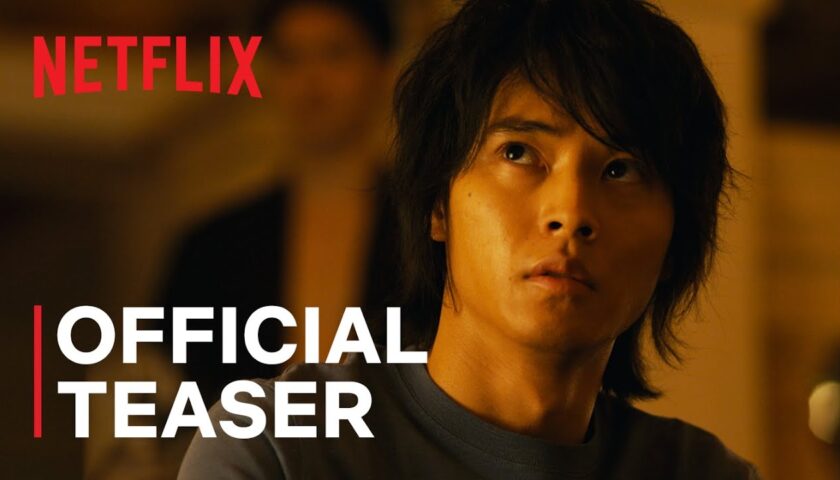 Netflix recently released the official trailer for their upcoming japanese show ‘Alice in Borderland‘. The show is a live action adaptation of the manga by Haro Aso titled Imawa no Kuni no Arisu’.

The fantasy survival manga itself is one of the top most selling novels in Japan and has garnered a huge fan following since it’s inception. It was about time that a live action adaptation on it’s interesting content was made. And Netflix took the opportunity and announced the series last year.

Throughout the year, Netflix kept adding popular actors in the series, which only increased the excitement for the show. The Netflix adaptation is being directed by Shinsuke Sato.

For those of you who aren’t familiar with the manga, here’s the gist of the plot :-

The story follows a jobless teenager named Arisu ( Japanese pronunciation of Alice ) who does nothing all day instead of playing games. With his friends Segawa and Karube, the trio decides to visit the city to have fun and gets into a trouble with the police. They hide from the cops somewhere, only to return afterwards into a now empty Tokyo.

They are dumbfounded to see that no one is around in the city except of them three and no one has any idea what’s going on in this deserted world. At night they find out that they have been transported into a different world where in order to survive and get out, they have to compete in games which very well ensures that either you’ll live or you’ll die.

Arisu and his friends meet several other people who are stuck in this world and are looking for their way out by navigating the games alone. When things start to get serious, Arisu believes that there has to be a game master who is controlling everything which has been happening. He makes sure to find out who the ‘Game Master’ is and end this!

After watching the trailer, one can only praise Netflix for bringing out such a brilliant content with ample thrills and visual effects. Netflix seems to have gotten the gist of audience’s mind and are looking to cash in their demands. The show looks nothing short of a Hollywood product!

With star studded cast and mind-blowing visual effects, Alice In Borderland is looking all set to break the charts for a Netflix original!

Alice in Borderland will be premiering on Netflix On December 10th 2020. The series will be having 8 episodes.