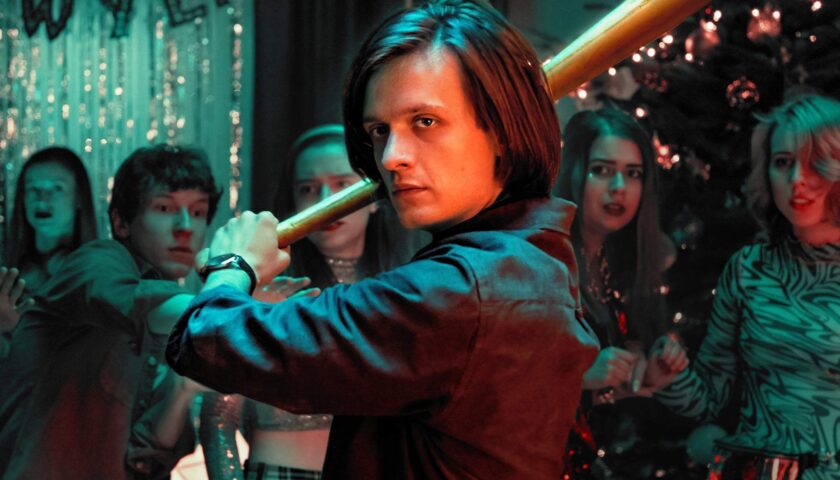 All My Friends Are Dead 2021 Movie Review Poster Trailer Online

A doofus rookie detective awaits outside a crime scene. He ebulliently snaps on his rubber gloves and shows his badge to the grizzled vet who’s going to show him around. His smile won’t last, because his mouth will cease turning up its corners and open wide so vomit can exit. It’s an ugly scene. A woman muttering crazythings is carted out on a stretcher, and she’s the lucky one. The place is just littered with bodies — one hangs from a noose of Christmas lights, others have bullets smack between the eyes. Blood: everywhere. The elder detective has seen it all before. He spots a dead woman with a nice necklace and he removes it. His wife will like it, he says.

FLASHBACK: the day before. All those dead bodies we saw? They’re alive now, which is what can happen in movies that forego linear storytelling. We meet some of the attendees: A cute couple; he’s smitten, but she’s upset by his inability to ding-dong her sexual desires if you know what I mean. Another cute couple; he’s fixated on being a wannabe rapper, and she therefore feels underappreciated, but she keeps spouting annoying astrological woo-woo. A third cute couple; she’s almost two decades his elder, and he’s jealous because she doesn’t want to commit. A fourth cute couple: two manchild-dorks who keep trying to score with the ladeez but fail miserably. A fifth cute couple: two shall we say sexually aggressive women in cleavage and spike heels who act like they share a single brain cell. And then one guy who walks around like the event photographer and another guy who’s hosting the party and a French Mormon guy and a fourth guy who arrives to deliver pizzas and waits around for far too long while the second guy in this sentence fetches the cash to pay him. Oh, and Jesus also shows up a few times, which, as the son of God, is totally his prerogative.

Then there’s the gun, a 9mm with gold highlights. Well, first there was the key that unlocked the case that held the gun that fired the bullet that killed a man and turned a night of innocent lusty sexy lust (with drugs) into one of bloody deadly blood (with sex and drugs). How this happens is ludicrous, but that’s just the tip of the iceberg for this movie, which slow-builds to ludicrous speed and climaxes with Motley Crue-soundtracked lunatic action — and you know the cardinal rule of movies, once you hear Motley Crue, that means things just got real, real f—ed up.

All My Friends Are Dead is garish and pointless, an unfunny drag, two slogs, a trudge and an eternity-and-a-half leading to a stoopid and loud climactic eruption of blood, flames, bodily fluids and American hair metal. The film features “amusing” orificial violations, a dim homage to The Shining, annoying characters whose action sometimes generally approximate that of recognizable human behavior and a sequence in which Jesus preaches peace over images of two men smashing their handbones into each other’s facebones. I describe these elements with as much objectivity as I can muster so you can determine whether the movie successfully hangs or markets itself.

Perhaps — perhaps, I say — the film is an anti-firearm missive showing how all it takes is one gun for an entire HOUSE full of young people to lose their minds and end up dead as a freezerful of steak. Maybe it’s satire or exploitation, but it isn’t clever or audacious enough to be either. It sure thinks it’s funny though, especially the Jesus stuff, e.g., when he tilts his head to get a good angle on some good, rowdy sexual intercourse. I wasn’t offended; I’m a fan of some good blasphemy. But that’s just some off-the-rack basic-ass blasphemy, and feel free to apply those qualifiers to most every other component of this movie.

All My Friends Are Dead 2021 Movie Review Poster Trailer Online