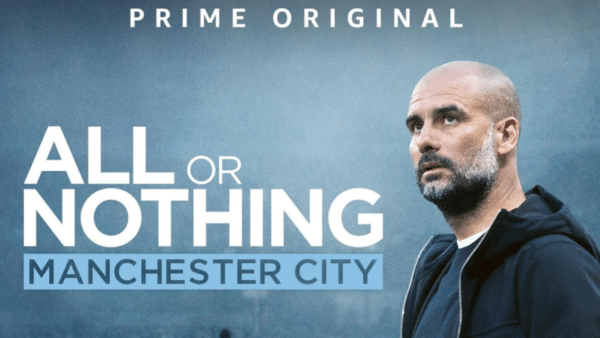 Review: This is a fascinating documentary into modern football. I remember watching a similar programme about Neil Warnock’s Sheffield Utd years ago and I suppose if you put this side by side with that it would paint a glaring picture of the way the sport, its players and its managers have changed forever. It’s obvious from the outset that money drips off every part of the top level of this sport but it’s interesting to see how it has been used to shape footballers into almost superhuman athletes with the best marketing in the world. The reason I enjoyed this documentary so much was mainly the insight it gives into Pep Guardiola. I have obviously heard all the cliches about the man before but this was the first time I felt actually understood why he has been so successful. Yes he has great teams and yes he gets huge amounts of financial support but his passion and outstanding man management are undeniable. Every scene featuring Guardiola is hugely watchable and often gripping.

I am not a Manchester City supporter, I am however a fan of football, particularly when the game is played with style and panache. Fascinating to watch a renowned manager manage a team of very expensively assembled footballers. Is it possible to generate a team spirit within a group of highly paid sportsmen? Spending huge sums of money guarantees nothing, Hollywood big budget movies don’t always hit the mark. Expensively assembled teams don’t always perform as collectively as their price tag would imply. This ‘fly on the wall’ documentary gives outsiders the chance to see how a team is shaped. How a manager driven, almost manically, by if not perfection, at least by the desire to try to achieve perfection. The desire to win however does not come above all else. The club’s understanding of David Silva’s desire to take time away from the team to be with his wife and prematurely born son is handled with compassion and understanding. Of course we don’t get the warts and all version, it’s unreasonable to expect that, but we do get more insight into a big time football club than anyone could ever have believed possible. Truly fascinating.

Fans have mostly been kept in the dark regarding what goes behind the scenes at a football club, that too the size of Manchester City and other premier league clubs. This documentary has given unparalleled access to how the team talks, locker room, transfer strategies and daily functionings of the club work. Add to this the raw emotion and the best ever Premier league season for a team in history, this makes for a deeply informative and enthralling view for all football fans, though it is understandable how some rivals will frown upon this as is the culture in world football today. Amazon have done a far better job with Manchester City than Netflix did with Juventus with barely any access other than some different angles of press conferences etc. This is a joyride which takes you through the whole season the club had with every bit of happy, sad, painful and victorious moments as never seen before. This changes your perspective on club football. Amazing.