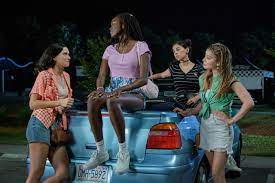 Along for the Ride 2022 Movie Review Poster Trailer Online

Auden West (Emma Pasrow) having finished her senior year of High school opts to spend her Summer away from her mother Victoria (Andie MacDowell) in the beach town of Colby with her father Robert (Dermot Mulroney) and his new wife Heidi (Kate Bosworth) working in Heidi’s beach shop. After getting off on the wrong foot with local girl Maggie (Laura Kriuki), Auden finds herself unable to sleep and wanders the town late at night where she meets fellow insomniac Eli (Belmont Cameli) and the two form a friendship that turns into a romance as they learn more about each other.

Along for the Ride is an adaptation of the novel by Sarah Dressen from 2009. The movie is the first in a three film deal with Netflix along with fellow Dressen novels The Lullaby and Once and for All. The movie comes to us from playwright turned screenwriter Sofia Alvarez who began her career on the TV series Man Seeking Woman and adapting the novels To All The Boys I’ve Loved Before and its sequel To All The Boys: P. S. I Still Love You also for Netflix and here makes her directorial debut. Along for the Ride hits all the beats you know from this type of grounded youthful romance story, but thanks to the strength of its two leads and Alverez’ strong writing and direction, Along for the Ride makes for a pleasant bit of low-key distraction viewing.

Emma Pasarow makes her first appearance as a lead as does Belmont Cameli who appeared as part of the ensemble in the Peacock revival of Saved by the Bell. Both are likable and attractive leads and the two have a natural chemistry that builds nicely throughout the movie as we dig into their lives and see their relationship develop. The supporting cast are also really good with Laura Kariuki really good as Auden’s eventual friend Maggie (following a brief misunderstanding) and Andie MacDowell and Dermot Mulroney are both good as Auden’s now divorced parents who each have their own issues that affected Auden both for the better and the worse. Kate Bosworth is quite good as Robert’s new-wife and Auden’s stepmother and there’s a warmth to her performance that exudes nicely in her interactions with Emma Pasarow as well as a quiet sadness in her scenes with Mulroney.

The story follows familiar beats of this type of narrative with both Auden and Eli’s insomnia stemming from deep seated personal issues with Auden’s being her family dynamic and Eli’s being survivor’s guilt for the loss of a friend and per the standards of this type of story it’s pretty clear where it’ll go and it hits many of the beats you’ve come to expect including the third act “on the outs” nadir, but the cast and writing earn the movie a decent amount of leeway.

Along for the Ride doesn’t reinvent the genre but it is a pleasant sit for romantics. There’s a sense of warmth, humor, and likability to the movie that won me over. I was honestly teetering between a 6 and 7 before ultimately giving it a seven, but maybe that’s because the last movie like this I saw was the God awful Moonshot so it’s possible I’m grading on a curve. From the description I’ve given of this movie as well as the trailer, you already know whether or not you’ll like this movie.

Along for the Ride 2022 Movie Review Poster Trailer Online