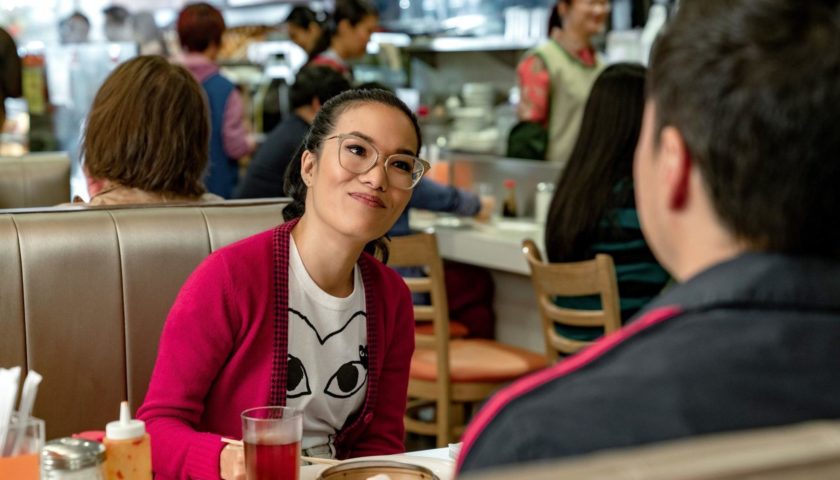 Review: Society, and relentless commercial campaigns, constantly bombard women with messages about matrimony: Score a big, sparkly diamond. Obsess over a fancy white dress. And definitely marry your best friend. That latter cliché has been espoused by countless Hollywood comedies, from “My Best Friend’s Wedding” to “Made of Honor,” where one party resorts to outlandish shenanigans to win over the more reluctant party. Refreshingly, director Nahnatchka Khan’s “Always Be My Maybe” presents a less lopsided — and by extension, more natural — situation in which two estranged childhood friends attempt to reignite their teen romance. The positive influence of “When Harry Met Sally” is noticeable in the undercurrents, but Netflix’s politically correct romantic comedy has its own unique identity, savoring aspects of Asian-American culture and treating both protagonists as equal partners.

Sasha Tran (Miya Chech) and Marcus Kim (Emerson Min) become childhood best friends in San Francisco, forming a connection over their love of food and family — specifically Marcus’. Latchkey kid Sasha spends most of her free time in Marcus’ home, cooking with his mom Judy (Susan Park) and bonding with his father Harry (James Saito). As teens, the duo continue to spend time together, taking cable car rides through the city, making cheesy mementos and fishing off the pier. But when Marcus’ mother suddenly dies, and the pair (now played by Ali Wong and Randall Park) give in to their urges in the back seat of his smelly, beat-up Corolla, their amorous feelings quickly turn awkward. It causes a rift in their relationship — one that can only be mended by time spent apart.

Years later, Sasha is now a celebrity chef who has parlayed her love of cuisine into a million-dollar company, running a Vietnamese fusion restaurant in Los Angeles. Her romantic life is less than successful, as her narcissistic restaurateur fiancé Brandon Choi (Daniel Dae Kim) breaks off their engagement on the precipice of her move to San Francisco. Heartbroken and ready to heal, Sasha returns to her hometown where, thanks to some meddling by her pregnant friend and business partner Veronica (Michelle Buteau, who elevates rubbing her belly into an art form), she reunites with Marcus. He’s caught in a state of arrested development, still living at home and working for his dad. His lack of confidence and fear of success have also put self-imposed limits on his musical ambitions, relegating him to playing a dive bar with his high school band. At first reluctant to reconnect, the pair soon rediscover their groove.

For a genre encumbered with unrealistic notions of romance and how to attain it, Khan’s feature feels wildly progressive in many ways. It never pits women against each other, fighting over the affections of a man, nor does it require either protagonist to sacrifice themselves for the other’s happiness. Both Marcus, who needs to break out of his comfort zone, and Sasha, who needs to remember what home means, are forced to do the necessary change to meet one another’s best selves in the middle.

The screenplay, co-written by Wong, Park and Michael Golamco, highlights different facets of comedy, from the physicality of getting busy in a tiny back seat (as Garfield and Odie figurines watch from the dashboard), to the broad outrageousness of a situation involving Marcus’ dreadlocked, free-spirited girlfriend Jenny (Vivian Bang) and a repulsive home-cooked meal. There’s even observational humor about the city’s rampant handicap placard abuse, and culturally specific, self-reflexive jokes about tip avoidance and the benefits of speaking Cantonese to dumpling house waitresses (as Marcus exclaims, “Free shumai!”).

Perhaps the best sequences are multi-purpose. They’re both funny and genuine, add a bubbly buoyancy through deft wit and charm, and tweak genre conventions. Keanu Reeves’ appearance in a pretentious gastronomy restaurant provides a solid set piece to ramp up the sex appeal, supply a provocative antagonist and deliver some hilarious one-liners, all while lampooning foodie culture. The unavoidable “chase to get the girl,” followed by the “grand gesture at a public event,” dovetail nicely into a surprise second grand gesture — one that might summon a few tears.

The material shifts in tone from humorous to poignant, and back again, fairly seamlessly. While Park and Wong, two actors known primarily for their work in comedy, are totally in their wheelhouse with the brisk and brainy banter, it’s their ease at leaning into their characters’ vulnerabilities that’s noteworthy. Park earns his leading-man status here with endearing sweetness and accessibility. Wong’s performance feels real and resonant. Peeking out from underneath her designer cat-eye glasses are intelligence, grace and beauty that rival any romantic comedy queen.