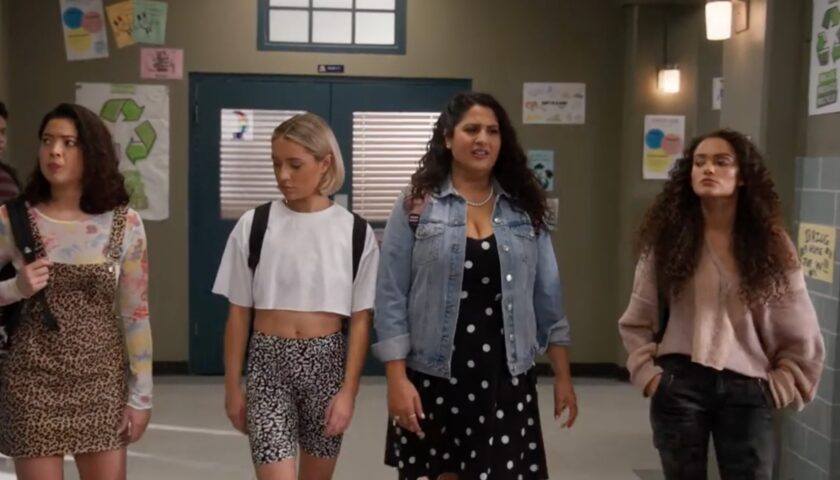 It may seem impossible given how bastardized the American Pie franchise has been since it became a staple of the direct to on demand services world but, the latest sequel, isn’t terrible. American Pie: Girls’ Rules isn’t going to be well remembered, or well reviewed by most critics, and it is far from being worth paying to see in a theater. But, it has just enough good humor from a terrific cast to be passably entertaining.

The premise is very simple, take the original, 1999 American Pie and flip the genders. Keep the raunchy lose your virginity before the end of Senior Year plot, and just make the main characters a group of women who vaguely reflect the core foursome of teenagers who made the original a fondly remembered 90’s classic.

Madison Pettis is our Jason Biggs analog, Annie Watson. We meet Annie as she is arriving at her boyfriend’s house to have sex for the first time. Annie is supposedly the last of her group of friends to have sex and with her boyfriend leaving for college, Annie intends on getting the job done on this night. If you think that this plan will go awry, well, of course it does. This isn’t a very original plot, but actress Madison Pettis embraces the humiliating series of fails with aplomb and tremendous comic fortitude and that goes a long way to selling this otherwise predictable and not so original sequence.

Playing the Kevin role in American Pie Girls’ Rules is Piper Kurda as Kayla. Kayla is a sexually voracious young woman who can’t get enough of her boyfriend. Unfortunately, Kayla remains deeply insecure about their relationship and can’t resist spying on him, hacking his phone and accusing him of cheating. This leads to her getting dumped, publicly, amidst a large crowd at a party and she’s quite funny while it happens.

Rounding out our foursome is the new Stifler, Stephanie Stifler (Lizzie Broadway). Yes, the Stifler tradition continues with yet another loudmouth, sex positive character. Though saddled with the obnoxious legacy of the Stifler chacracter, Broadway is undaunted. She finds a terrific beat to play as Stephanie Stifler that straddles the line between what fans expect of a Stifler and what makes Broadway herself a unique talent. Even as everything in American Pie: Girls’ Rules is desperately predictable, Broadway is so uniquely compelling that I didn’t care how pro-forma the whole movie is.

The rest of the cast of American Pie: Girls’ Rules is headed up by Darren Barnett as Grant. Barnett is the weakest link of the cast, a blandly handsome young man who becomes the center of each of our ladies’ lust. Each girl sets upon Grant as their ideal man while Grant only has eyes for Annie, despite her having a boyfriend. This, as everything else in American Pie: Girls’ Rules, goes exactly as you predict.

Barnett isn’t particularly charismatic but, in fairness, he is really let down by a script that merely uses him as a functional element. Barnett drives the plot by being the subject over which the girls of the cast obsess. Then, of course, alternative love interests are introduced to each story while silly stumbling blocks are set up in order to keep Annie and Grant from falling for each other. Secondary to that love story is the sex, lots and lots of PG-13, shirt wearing, sex.

I should hate this movie and I am sure a lot of my fellow critics will hate this movie, if they even bother watching it. That said, I don’t hate American Pie: Girls’ Rules. There is nothing spectacular or deeply artistic about it, but I did enjoy the very game cast who throw themselves headlong into the humor of of the American Pie universe. Madison Pettis, whose first big role came opposite Dwayne ‘The Rock’ Johnson in The Game Plan more than a decade ago, is especially notable for her willingness to endure big physical gags and a whole lot of humiliating gross out stuff. Pettis’ good humor sells what are otherwise lowbrow mildly funny gags typical of the American Pie franchise post-2003, when most of the original cast left.

But, my absolute favorite among this cast of talented and funny young ladies is newcomer Lizzie Broadway. Carrying the burden of the legacy of the name ‘Stifler,’ as made infamous by Seann William Scott more than 20 years ago, Broadway brings a few twists and turns to her Stifler and her cocksure manner and unbounded confidence may be typical to the character but her innate, forceful talent, that’s all Broadway. She’s terrifically funny and finds some lovely quieter traits as well for a character that was likely not very dynamic on the page.