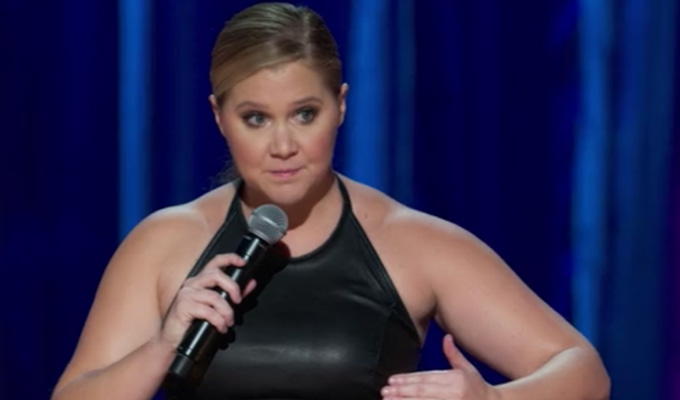 The trailer teases some of the topics Schumer will make light of during the special, including her marriage to Chef Chris Fischer and pregnancy. The special was filmed in Chicago in December.

“Prepare for a new side of Amy Schumer,” reads a caption during the trailer’s introduction. Schumer is then seen rubbing her stomach as she announces, “I’m fucking pregnant.”

“Here’s the thing. You’re pregnant, but you don’t change who you are. I hate women who start to act like really precious,” she tells the audience. “You don’t stop being you, you know. You don’t stop working or drinking.”

The comedian later jokes about the way movies depict proposals. “In movies, TV shows, the guy always gets down on one knee, right, and the girl’s always shocked,” she says. She then gasps and mimics a woman that was recently proposed to. “‘I didn’t even know you liked me. Like, I’m still on Bumble.'”

In another joke, Schumer tells the audience that she doesn’t think she will ever have to be a bridesmaid again because she was the last of her close friends to get married. “When you get in your late 30s, there’s just no dignity to it. It’s me in a Coachella flower halo hoping I’m not the bridesmaid with the biggest arm, you know,” she says.

Schumer also touches on her difficult pregnancy during the special. “If you had a good pregnancy, like if you’re someone who enjoyed being pregnant, I just hope your car flips over,” she joked.  “That’s what I wish for you.”

The special marks Schumer’s second stand-up special on Netflix. Leather Special was previously released on the streamer in 2017.

Amy Schumer: Growing will be available to stream on Netflix on March 19. Watch the full trailer above.