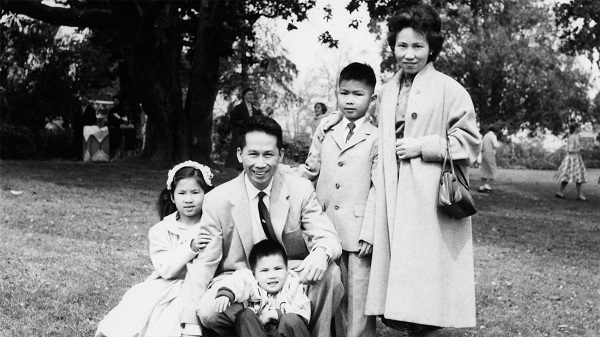 Novelist Amy Tan’s centrality to the history of Asian American representation in literature and on-screen cannot be overstated. And the late James Redford’s pleasant, sympathetic biographical documentary, “Amy Tan: Unintended Memoir” is careful to avoid any such overstatement: It presents Tan’s fascinating life story from an intimate perspective, which is engaging and compelling on the level of personal reminiscence, but perhaps inevitably falls short in the broader assessment of her cultural impact. It’s an approach that seems to emanate from the subject herself: Whatever self-regard might be implied by the term “memoir” is swiftly dispelled by its “unintended” nature.

This humility makes the film both endearing and a little frustrating. Tan’s genius, as several publishing and media-industry interviewees assert, was in creating widely relatable fiction out of the idiosyncratic, specific details of her life (such as the actual Joy Luck Club, a loose affiliation, founded by her parents, of first-generation Chinese immigrants who’d gather around dining-room tables to eat, discuss business and gossip over mahjong). But barely explored is the contradiction that arises when despite your humble approach, you become, intentionally or otherwise, the voice-of-a-generation representative for an entire diaspora.

Tan, now an elegant lady in her late 60s with a sharp bob and a wryly soft-spoken manner, seems gratified but also bemused at her career trajectory. “Often I think I’m dreaming my life,” she says, recounting how it wasn’t until well after “The Joy Luck Club” had become The New York Times’ longest-ever No. 1 best-seller that she even dared to consider being a full-time novelist. (Though as she wittily points out, it was actually her second best-seller, the first being a manual she wrote for IBM as a jobbing technical writer). But when the backlash against Tan’s work is mentioned, including the assertion that as the key figure addressing the erasure of Asians from American cultural life she almost inevitably established a set of Asian stereotypes that were then enthusiastically embraced by the (white) mainstream, it is framed almost entirely in terms of the psychological challenge to Tan’s self-confidence.

Her crisis of confidence was partly allayed by a stint with the Rock Bottom Remainders, the all-star-writers novelty band whose lineup also included Stephen King, Scott Turow, Barbara Kingsolver and Matt Groening. Tan’s incongruous appearance in a silver bodysuit brandishing a whip and warbling an off-key rendition of “These Boots Are Made for Walkin’” is a delight, and she mentions its liberating effect on her during a period when she struggled with writer’s block and self-doubt. But this focus on the personal, which extends to the brief coverage given to the eternal difficulty of following up a dazzling debut, also means we don’t ever hear her really contend with specific criticism of her work. And critical voices are largely absent from the lineup of talking heads: Tan’s friends, professional allies and family members, as well as Kevin Kwan (the Singaporean American author of “Crazy Rich Asians”), cast members from Wayne Wang’s 1993 film of “The Joy Luck Club,” and fellow author Isabel Allende, offer enjoyable perspectives that are uniformly admiring and supportive.

On the other hand, outside Tan’s literary-phenomenon status, her life story contains drama enough to power several biopics. It stretches back a couple of generations and is told here fluidly through home-movie footage, photographs, simple animation, gently confessional segments with the author and excerpts from a recent public speaking engagement. Indeed, “Unintended Memoir” works best less as a portrait of a literary titan (the film will air as part of PBS’ “American Masters” series) than as the moving outline of a fraught mother-daughter relationship, further complicated by the challenges specific to the children of immigrant parents of that era. Tracing her mother’s escape from her first marriage to “that bad man” — an understatement by any measure — through her love affair with Tan’s father, their emigration to America, and then his tragic death, just months after Tan’s elder brother Peter died, the film contextualizes her mother’s mental instability and suicidal ideation without soft-pedaling its effects on Tan’s development, as a writer and a woman.

With typically clear eyes, Tan describes her drive to write as springing from her “neediness to know, which is not a ‘need to know’ which can be satisfied, but a perpetual state of uncertainty and a tether to the past.” And as the revelations about her “love-hate” relationship with her mother (given the warmth of their later reconciliation, perhaps that should be “love-hate-love”) explode one after the other like a string of firecrackers, “Amy Tan: Unintended Memoir” eventually works the same subtle spell that Tan long ago mastered in her fiction: the communication of a deeply personal history of pain and joy in a manner that is unassumingly and touchingly universal.