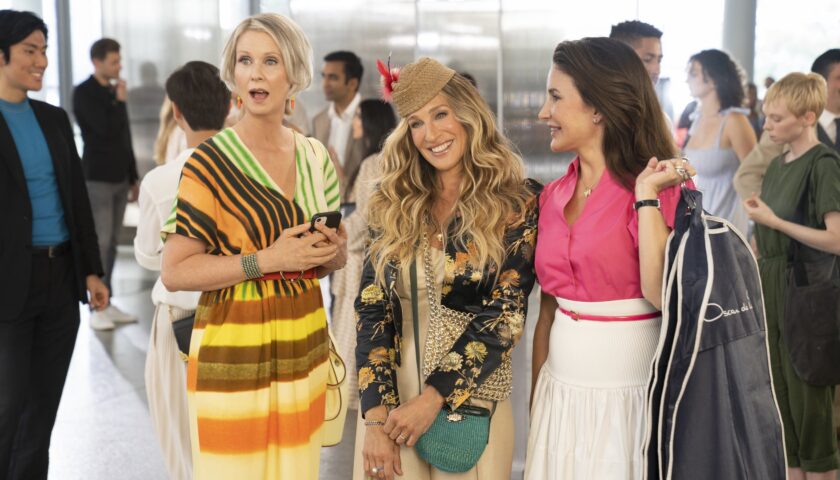 HBO’s revival series And Just Like That… A New Chapter of Sex and the City feels much more like the critically reviled Sex and the City 2: vacuous, overly sentimental, and completely devoid of the charm that made the original show such a cultural phenomenon. And Just Like That… is a ten-episode return of HBO’s iconic New York City friends, set roughly a decade after the last feature film. While much of the original cast is back — including some notable guest roles — the razor-sharp wit, gritty realism, and groundbreaking attitude towards women’s sexuality are nowhere to be found. Overall, And Just Like That… is a clumsy, cringe-inducing revival that fails to recapture the magic of the original.

And Just Like That… follows Carrie Bradshaw (Sarah Jessica Parker), Miranda Hobbes (Cynthia Nixon), and Charlotte York Goldenblatt (Kristin Davis) entering the next chapters in their lives. Carrie is happily married to Mr. Big (Chris Noth), Miranda is about to start her graduate studies, and Charlotte is trying to age gracefully by attempting to not age at all. The first episode ends with a major character death — one that is heavily foreshadowed throughout the premiere and is ham-fistedly executed with dramatic music and an over-the-top, emotionally-wrought climax.

After two episodes of And Just Like That…, it’s clear that the revival series has a tone problem. Sex and the City was always a comedy-drama, mixing its tongue-in-cheek attitude towards sexuality with plenty of genuine character arcs, including some devastatingly heartbreaking moments. The drama in the original series, however, never detracted from the show’s levity. And Just Like That… is unable to find the humor inherent in its situations. There are very few jokes, and even fewer still that land; the writing is stale, often feeling out of touch with 2021 audiences. Worst still, the show relies too heavily on exposition dumps and uncomfortable social interactions, rather than writing generally compelling and interesting stories. Sadly, And Just Like That… feels like a very polished fan-fiction: it features all the hallmarks of Sex and the City without fully understanding what makes these elements work.

Sex and the City was a refreshingly frank portrayal of how unglamorous the New York City single life was for the four friends: Carrie, Miranda, Charlotte, and Samantha (played by Kim Cattrall, who opted not to return for the revival). Even in the very first episode, the glitzy nightclubs and high-fashion shoes were intentionally undercut by Carrie’s often-grim reality. This lessened as the series went on, but even in season 6, there were plenty of moments in which the “fabulous” lifestyle lived by the four friends was anything but. This was especially true of Carrie, who often stood in for the audience by being the perpetual underdog. This is best encapsulated by the intro, which sees Carrie confidently walking down a busy street, only to be unceremoniously splashed by a city bus — one that happens to be advertising her column. It’s that tension between misfortune and irony that fuels the show’s humor; viewers expect life to knock the women down a peg, but with the knowledge that they’ll bounce back, more fabulous than ever.

The allure of Sex and the City wasn’t so much the lifestyle of the four friends, nor simply the strength of their friendship: it was the women’s collective ability to persevere, thanks in large part to their support network. And Just Like That… focuses too much on the friendship and the drama, and hasn’t done enough to show any growth or maturity in these relationships over the last decade. The first episode awkwardly tries to pick things up where the show left off, pretending like nothing’s changed since audiences last saw the characters in 2010. This is exactly the wrong approach; not only does it bring attention to Samantha’s absence, but the “everything is normal now” attitude rings false in an era of COVID. The lack of a clear story — at least until the twist ending — means there also isn’t a clear reason motivating the revival. If the original series’ raison d’être was the story of four women pursuing love, what are viewers tuning in for now? Middle-aged women in happy, stable relationships is not a strong enough conceit to carry a drama series.

In trying too hard to emulate the original Sex and the City formula, And Just Like That… shortchanges the characters by not allowing them to have matured to fit their stations in life. Charlotte is still insufferably Type A and childlike, despite being in her mid-50s. Miranda has mellowed out, but her awkwardness is now towards her inability to navigate a “woke” culture. Stanford (Willie Garson) and Anthony (Mario Cantone) are inexplicably as snide as ever, despite having been married for ten years. The biggest change — other than Samantha’s obvious absence — is Carrie having settled into married life with Mr. Big. Having gotten used to the affluent lifestyle, she no longer carries the spunky resilience that contrasted so well with her successful friends. She’s also become surprisingly prudish. In short, Carrie is now too boring to carry a show, which makes the earlier issue of the weak central premise even more problematic.

As a revival series, And Just Like That… both fails to breathe new life into the once phenomenal property, while also utterly failing to honor the source material. Even the power of nostalgia can’t compensate for how flatly the main characters are portrayed. Despite the many years that have passed since Sex and the City ended, seemingly no one has grown; Charlotte is shockingly more shallow and one-note than she was 15 years ago, while Carrie is almost unrecognizable from the free-spirited columnist who once wrote very personal and intimate stories about her sex life. Just two episodes in, it’s clear that HBO’s revival won’t be able to bring Sex and the City back from the dead.