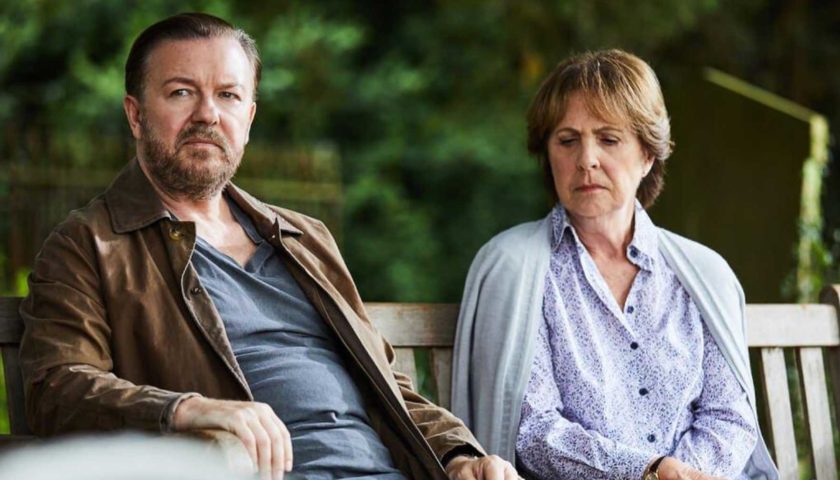 Review: After Life” tells a familiar story. A bitter man, this time hardened by the untimely death of his wife, lashes out at a world he believes isn’t worth living in until he opens himself up to the possibility of a new and different happiness. He stubbornly clings to his caustic words and attitude until he finally can’t, or maybe more significantly, doesn’t actually want to. It’s a redemption story, sure; but more than that, it’s a story about learning to live with clarity and compassion even when doing so feels completely impossible.

What makes “After Life” so fascinating is that this version’s writer, director, and star is Ricky Gervais. Since creating “The Office” and “Extras,” Gervais has cultivated a public persona of defiant candor that he’ll often say makes him a person non grata in Hollywood, despite the fact that he has hosted the Golden Globes four times and signed a lucrative deal with Netflix that so far includes two stand-up comedy specials, three movies, and now, “After Life.” His entire career now hinges on his own insistence that he should be allowed to say what he wants when he wants to, and damn anyone who would tell him otherwise. (And not for nothing, this is a reputation that Netflix has leaned into hard while promoting his material; the marketing campaign for “After Life” touts his character’s belief that saying what he wants is a “super power.

Usually, I try not to let extra-textual factors make its way into reviews. But the fact is that watching the show, which runs the emotional gamut from viciously cutting to incredibly earnest and back again, can be downright bizarre when you’re even glancingly familiar with Gervais’ comedic evolution. It’s hard to reconcile the Gervais who spent much of his 2018 comedy special (“Humanity”) defending the right to make acidic jokes about whatever “verboten” subject he wants — ranging from transpeople’s genitals to dogs smelling AIDS — with the man he plays in “After Life” who learns that he shouldn’t. It’s a genuinely wild experience trying to mentally bridge that gap to read the tea leaves of what, exactly, Gervais is attempting to say.

By the time we meet Gervais’ Tony, he’s already been mourning for what seems to him like forever. He watches the video his wife Lisa (Kerry Godliman) made for him before she died, in which she leaves him detailed instructions about how to function in the world without her and implores him not to wallow in his grief like she knew he would want to. Sure enough, Tony has ignored all of this advice. Instead, he sleepwalks through his cluttered house and job at the local paper, lashing out at anyone who crosses him (or, more likely, just plain annoys him). Believing that Lisa was the only one who ever did or could understand him, Tony’s become a harder, meaner version of himself who takes every opportunity he can to remind himself and everyone around him that he’s just wasting time until he can finally kill himself. (Despite Tony’s eventual softening, I really don’t recommend “After Life” for anyone who’s experienced suicidal ideation before.

For the first few episodes, Tony’s terrible attitude reigns supreme. This particularly caustic mode will be familiar to any fan of Gervais’, and even though the people around him regularly recoil at it, it’s clear from the writing that Gervais himself believes that Tony’s truth-telling, however harsh, isn’t that far off the mark. He sneers at the townspeople trying to get their name in print by playing instruments through their nose or imagining that water stains on their walls look like celebrities. He rolls his eyes at his optimistic co-workers, especially the one whose entire personality is “loves Kevin Hart.” He scowls through an open mic night, gets called out for it by the comedian onstage, and immediately brings the room down when he states with unnerving calm that, again, he really would rather be killing himself than sitting there pretending otherwise. There’s something to the idea here of accepting how all consuming grief can be, but that message gets lost when the show indulges Tony’s aggressive unpleasantness as much as it does.

The turning point comes when someone finally goes ahead and calls Tony out to his face. After scowling through one too many visits with his infirm father (ubiquitous staple David Bradley), the nurse (an always welcome Ashley Jensen) finally snaps. “You’re like a troll on Twitter. Just because you’re all upset, means everyone else has to feel upset,” she says. “At first I thought, ‘I’ll give him the benefit of the doubt’ because I just assumed you were always having a bad day. But maybe it’s just because you’re a c—t.”

In this moment, the entire series shifts. Though Tony doesn’t quite realize it yet, this wake up call is the catalyst for him going forward, the call-out he needed in order to recognize that maybe, just maybe, going around saying whatever comes to mind at everyone else’s expense isn’t all that great a way to live. By the time a fellow widower tells him that there’s “no point feeling sorry for ourselves and making everyone else unhappy, too,” the show and Tony alike turn a welcome corner — but it’s still impossible to tell how self-aware this evolution is on Gervais’ part.

On the one hand, as he says in “Humanity” over and over again, he doesn’t care about “the so-called ‘backlash’” to his jokes, and believes that people taking offense to them is just “about feelings and feelings are personal.” On the other, as he eventually says in “After Life,” there’s a difference between being honest and being cruel. This lesson in basic kindness, despite all of his attempts otherwise, may be Gervais’ most shocking turn yet.