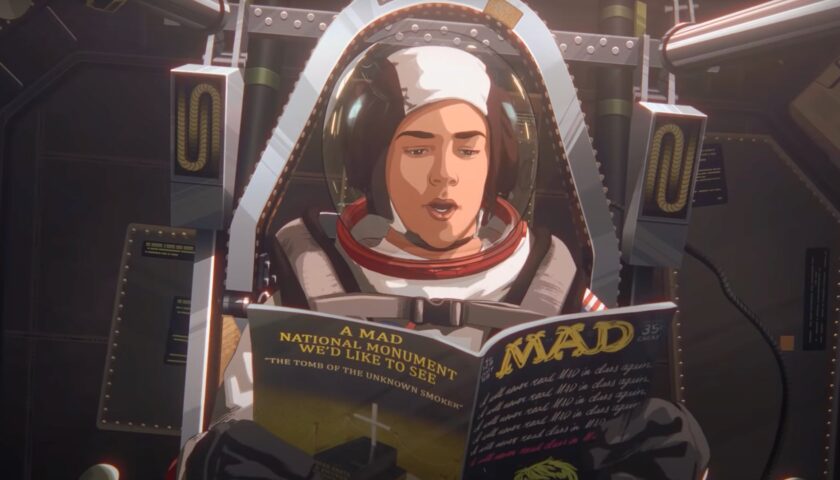 Deeply personal in a way that should resonate with anyone who lived through the era (and maybe few others), Richard Linklater’s “Apollo 10 ½: A Space Age Childhood” captures the infinite possibilities the space program conjured and the quirks associated with growing up in the 1960s, though not really in that order.

Employing a variation on the animation technique of rotoscoping — filming live-action sequences and then animating over them — the director of “Boyhood” has constructed an inordinately fond reminiscence about his boyhood years, growing up in the shadow of NASA and, as described in the director’s note, “the grandest and most enduring engineering feat in human history.”
Linklater’s wry flight of fancy about being drafted into the astronaut program as a kid — something about a miscalculation regarding a module that wouldn’t fit an adult — takes a backseat to the biographical details, among them growing up the youngest in a large family.
Baby boomers will surely nod along at how strange some customs of the times must appear now, back when there were only a few TV networks, scant concern about safety (bike helmets? Please) and the notion of walking on the moon felt like a crowning accomplishment for all humankind.
Narrated by Jack Black as the grown-up version of the central character, Stan, “Apollo 10 ½” makes good use of animation not only to colorfully replicate the period but in adding an otherworldly quality to those recollections, steeped as they are in (sometimes exaggerated) memories. Our stories, after all, tend to take on epic attributes the more we tell them.
Whether the movie will mean much to anyone under 55 or so is anybody’s guess, but that simply makes Netflix — unfettered by concerns about advertising and catering to younger demographics — the ideal home for such an endeavor. It’s a gauzy indulgence in nostalgia that sweetly captures a very specific time and place, which should broadly speak to Linklater’s contemporaries who somehow survived childhood before our society adopted most of the pesky rules designed to ensure that they do.
The film also makes extensive use, appropriately, of CBS News footage of Walter Cronkite covering the lunar landing (rotoscoped, along with everything else), the definitive visual account of a moment shared by hundreds of millions of viewers across the globe.
Linklater employs a slightly different style than on his previous animated films “Walking Life” and “A Scanner Darkly,” giving the project a handmade, retro flavor; still, the real special effect resides in the keen eye and warmth that permeates the movie.
By creating this imagined window into this history, “Apollo 10 ½” plays like a valentine to those who can remember watching the moon landing on a small, grainy TV. In doing so, the film launches you back to a time when streaming movies into the home would have sounded like science fiction, and TV stations played the national anthem before signing off for the night.
“Apollo 10 ½: A Space Age Childhood” premieres April 1 on Netflix.