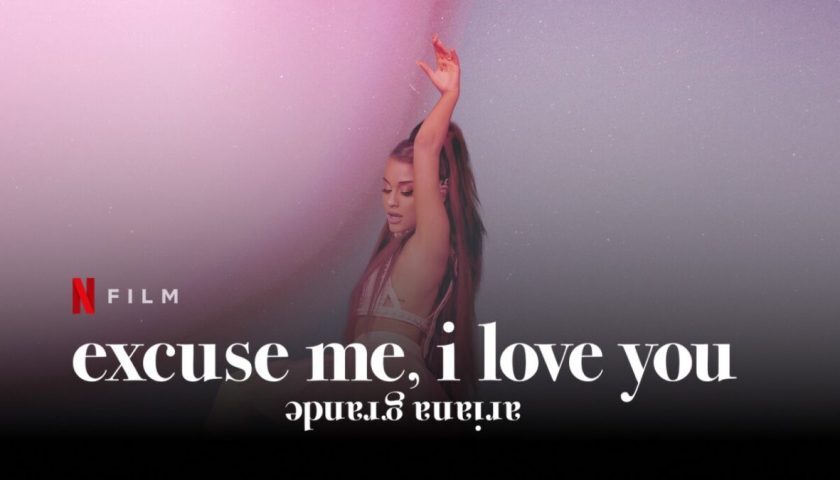 Excuse Me, I Love You consists largely of concert footage from the London stops on Ariana Grande’s 101-date Sweetener World Tour, which wound its way through North America and Europe for most of 2019. Interspersed with the performances are documentary-style segments that capture Grande backstage, before the show, hanging with her dancers, or having her high pony wrangled. This isn’t a group to be seen poppin’ bottles pre-show. These are professionals here to do work, and appropriately the opening set of the show itself is choreo-heavy. Emerging from the darkness on a lift at center stage, Grande and her 12 dancers appear draped across a long table in a Da Vinci’s Last Supper motif, with the star at center axis singing Sweetener‘s Platinum-selling single “God Is a Woman.” They begin to writhe, shift positions, and the set quickly leaps into “Bad Idea” and “Break Up With Your Girlfriend, I’m Bored.” This tour is about hits and bangers, one after the other, and cutaways reveal a crowd in ecstatic revelry. In excelsis Deo, glory to Grande in the Highest.

The material from Sweetener and 2019’s Thank U, Next is for the most part blippy, stuttering dance-pop with lots of space in the arrangements for Grande’s trademark trills and vocal runs. She hits all of those notes live, to the point that her vocal is the hottest thing in the live mix, though an onstage band of drums, guitar, keys and electronics does produce a good bit of volume. This is Grande’s show, though, and that of her dancers, who are a whirlwind of synchronized, herky-jerky, high-stepping movement. The frequent guest shots from hip-hop major leaguers like Nicki Minaj and Big Sean are piped in over the monitors, but even if they weren’t, those parts appear, shouted to the rafters by the audience. “Gun pop and I make my gum pop; I’m the queen of rap, Ariana run pop.”

With numerous costume changes revolving around a theme of thigh-high stiletto-heeled Versace boots, there’s visual pizzaz to match the music’s buoyancy, and in the doc sections of Excuse Me, I Love You, Grande proves to be a bundle of youthful verve, clip-on lashes and determined professionalism, forever thinking about her next moment on stage, giving it all to the fans.

Performance Worth Watching: During “You’ll Never Know,” Ariana descends from the main stage for a touch-the-fans moment with the Arianators inside the audience pit, and the camera catches one kid who embodies the vibe of this lucky group. He’s singing along with each lyrical trill, eyes shuttling between hysterically squinched shut and straight popping out of his skull because his fingers are touching his queen as she sings. His iPhone is clutched in his other hand, filming as he holds in front of half his face, and its glittery case matches the charms glued to Grande’s cheeks. One of the fluttering play money C-notes from the set’s earlier run through “7 Rings” sticks out from his fist. This kid’s nickname should be “High Pony.”

Memorable Dialogue: Scott and Brian Nicholson are a twin brother pair who feature heavily in the Ariana Grande universe as her BFFs as well as principal choreographers and creative directors. During one between-song segment, the camera follows Scott as he is led by security to the upper reaches of the arena. He’s searching for a fan to give main floor tickets to, and we learn this is a tour tradition. “We have a criteria,” Nicholson says. “We like a single parent with their kid. Definitely someone dressed crazy. Somebody already practicing the choreography in their seats; a superfan.” “Drag queens,” Another dancer adds. “Drag queens are really good.” Cut to Nicholson and Grande’s mother Joan gifting a grateful woman a set of the primo tickets as her youngest daughter melts down with joyous emotion.