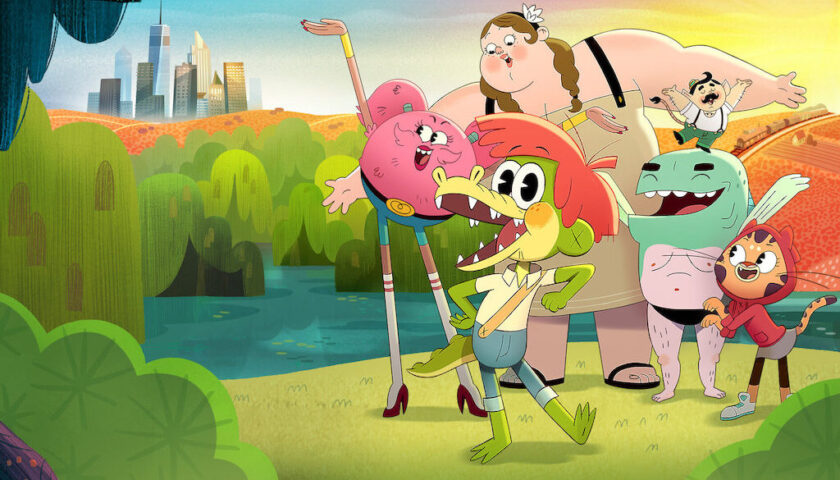 This year, Netflix released a brand new original animated musical feature for their platform called Arlo the Alligator Boy, intended as a pilot for an upcoming series. Made in collaboration with Titmouse, the film was announced as early as last year when the pandemic hit pretty hard, so it was only a matter of time until the movie would be met with raving responses from audiences and critics alike. Also, it is quite remarkable to see one of the first animated features to be mostly made remotely as opposed to predominately within a studio, so a lot of credit must be given to the hard working crew. But how did the movie favor overall?

The story focuses on a wide-eyed half human and half alligator boy named Arlo Beauregard, who decides to leave his sheltered swamp residence in search for his long lost father in New York City. Along the way, he meets some strange characters, like a teen gigantes, a flamboyant furball, a paranoid legged fish, a tiger-like girl and a rodent-like conman, all while discovering the true meaning of family. Simple enough premise for a set up aside, it’s not hard to imagine what might happen in the movie from that point onwards. However, what does keep the movie somewhat engaging is Arlo’s upbeat personality and willful determination to find where he belongs, even if that trope is pretty familiar. In addition, the film’s message of finding who you are through the people you know and love is quite emotional in a way that both children and adults can engage themselves very closely, given the film’s intended audience. No matter if you’re a human or animal, you always have a place within the hearts of others so as long as you can keep an open mind for the ones who care for you.

However, good intentions aside, there are a lot of shortcomings that do make this film a bit hard to swallow. For one thing, aside from the goodhearted yet tough gigantes Bertie, a lot of Arlo’s companions are pretty one note and mainly just there to provide emotional companionship. One might imagine they could be more interesting in the series, but if this is meant to be the setup for what is to come, why not introduce them in the show instead? Even with solid vocal performances from Tony Hale, Brett Gelman, Jonathan Van Ness and Haley Tju, these supporting players aren’t as interesting as they could have been. It doesn’t help that most of the humor falls short of generic banter and obvious tropes. Also, as this film is a musical, while the songs do move the story forward, a lot of the melodies are kinda samey samey with pretty formulated harmonies and keys. The more interesting ones like Follow Me Home and Wash the Hurt Away do stick out with more experimental instruments and creative visuals, but as a musical overall, I’ve heard more memorable.

As for any further positive qualities, the film’s animation lends itself to a more standardized Netflix series level of fluidity, but the character animation itself is pretty charming depending on who’s given a chance to lend themselves in the spotlight. The art direction is also quite colorful at points, but isn’t afraid to get dramatic when the scene calls for a more heartbreaking narrative point. It’s also cool to see a lot of the characters, including Arlo himself, feel reminiscent of 1930s bug eyed cartoons while still keeping its own style intact, unlike a lot of cartoons now that desperately try to capture the success of Cuphead. Speaking of characters, the last protagonist to remember more thoroughly is definitely Arlo’s father, since he does show a lot more depth within himself than the average high end entrepreneur. The main antagonists Ruffy and Stucky are also pretty fun to watch every now and then, as for every comical slip up that happens to them, they can be genuinely threatening to the journey Arlo and his friends go on. Not sure how they’ll fit in the series, but that’s up for the future to decide.

So for all of its faults, Arlo the Alligator Boy is still a good hearted and likable feature that might lead to an even better series. Even if the film might not have gotten everything right, that’s not to say what Ryan Crego and crew have put together shouldn’t be bothered with; far from it in fact. With the success Netflix has been gaining in their original animated content, be it shows, movies, or even experimental short films, it’s only a matter of time until Arlo gets to truly stand out in the spotlight as another addition in their ongoing catalogue. Here’s to what new adventures await Arlo and the family.