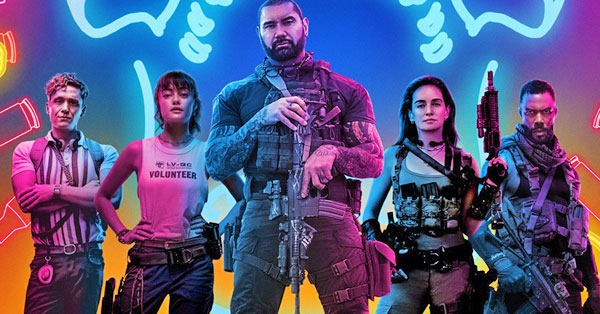 The opening 14 minutes of Zack Snyder’s deliriously enjoyable return to zombie mayhem, Army of the Dead, are a marvel of swift exposition. The pre-credits sequence lays the foundations for prequels to come by revealing the escape just outside Las Vegas of an undead super-specimen, a zombie “patient zero” who appears to be the result of military experimentation. Then, over main titles in dazzling neon pink, Sin City is ravaged by marauding zombies, their onslaught eventually curbed by hardass civilian characters who pause for photo portraits.

The soundtrack? Elvis, of course, beginning with “Suspicious Minds” before segueing into a slowed-down, swinging cover of — what else? — “Viva Las Vegas.” The whole thing is a blast that hooked even this Snyder skeptic.

From the Liberace impersonator tickling the ivories to the trio of topless zombie showgirls tearing the toupee off a partying sleazebag before making a blood feast of him in a sunken tub, Snyder shows an “infectious” sense of humor here that has seldom if ever been so evident in his work. After experiencing personal tragedy and the professional trials that led to the feverishly anticipated “Snyder Cut” overhaul of Justice League in March, the director is having a wild time. He appears to be relishing the freedom from studio oversight and seizing the comparatively long creative leash granted him by Netflix. (The movie hits the streaming service May 21, following a limited theatrical release from May 14.)

At two and a half hours, this is a lot of furious flesh-eating for one meal. But the screenplay by Snyder, Shay Hatten and Joby Harold strikes a satisfying balance between accelerated action — fountains of blood, splatter, gore and punishing fight sequences — and quieter, character-driven interludes that succeed in making us care about the motley crew tackling the zombie menace. This is also a B movie in which the ballsy women, queer-friendly elements and racially diverse casting are anchored in story and not just ticking off inclusivity boxes.

The film provides clear outlines for the related anime-style series Army of the Dead: Lost Vegas, which chronicles the early stages of the zombie outbreak; and the feature Army of Thieves, focusing on German safe-cracker Ludwig Dieter, played by Matthias Schweighöfer, who also directs. (His girly squeals of terror in Snyder’s film are a hilarious running gag.) Should fan appetites demand it, there’s also a pathway here to a sequel, likely set in Mexico City.

Taking the Steven Soderbergh route by serving for the first time as his own cinematographer (shooting on custom-made digital cameras), Snyder is in exhilaratingly nimble form. He breaks away from the grim color palette and grungy aesthetic of his DC entries or the processed, video-game look of 300 with a film that feels substantially lighter, despite its rampant trail of death. That applies both to visuals and tone. There are playful references to the Four Horsemen of the Apocalypse, Greek mythology, Joseph Campbell and Wagner’s Götterdämmerung, but mercifully, none of the eye-rolling talk of comics arcana like the “Mother Box” that bogs down passages of Justice League.

The hyper-saturated tones of the fabulous opening titles recall Harmony Korine’s candy acid trip Spring Breakers, and the witty music choices make nods to, among other films, An American Werewolf in London and Apocalypse Now. Snyder is up front about his cine-referential inspirations — George A. Romero, obviously, though even more so Planet of the Apes, Escape From New York and Aliens. Army of the Dead, however, is first and foremost a stealth love letter to that latter James Cameron classic, right down to closely paralleled characters and specific plot points. Watching Samantha Win’s bandana-sporting Chambers mow down “shamblers” in a blaze of glory, I got quite wistful for Jenette Goldstein’s fearless Vasquez.

Snyder first hatched the idea of this deeper dive into zombie genre tropes right after completing his 2004 feature debut, Dawn of the Dead, and he wrote the first script draft a decade ago. Beyond the baseline of an American metropolis under undead siege, there’s no direct narrative connection here, though audiences nostalgic for the earlier film’s zombaby will be poignantly rewarded. (Hello, merchandizing opportunity!)

The delay of 17 years has benefited the new installment immeasurably in terms of cultural allegory. Its setting in the American Mecca of aspirational vulgarity, for one thing, seem apposite for the Trump hangover, with showers of cash amid the bloodshed. And the decimated aftermath of a plague is all too relevant. Watching a militarized security guard lord his power over civilians in a refugee camp with a digital thermometer is even more so. The contemporary social context is hammered home with a mischievous wink by having Sean Spicer pop up as a media pundit interviewing veteran Dem political strategist Donna Brazile about the echoes of immigrant stigmatization in the war on zombies. The concept of borders alone now takes on weighted significance in the film’s world.

In an appealing performance that positions him as the musclehead middleman between vintage Arnold Schwarzenegger and The Rock, Dave Bautista plays Scott Ward, a Vegas local who received the Medal of Freedom for saving the U.S. secretary of defense during the zombie outbreak but is now slinging burgers in a diner on the edge of town. A flashback reveals Scott tearfully putting a knife through the head of his zombified wife while their traumatized daughter Kate (Ella Purnell) watches in horror.

Downtown Vegas is now a walled city wherein the undead infestation has been contained. A low-yield nuke is scheduled to wipe them out at sunset on July 4, leaving just 32 hours for Scott to pull off a $200 million heist at the behest of casino boss Bly Tanaka (Hiroyuki Sanada). “Easy peasy Japanesey,” says Tanaka, before promptly being informed that “lemon squeezy” is now more acceptable.

Tanaka insists on sending along his head of security, Martin (Garret Dillahunt), to protect his investment, with Guzman’s loyal sidekick Chambers becoming the first to smell a rat. Or in Aliens terms, a Paul Reiser.

Scott also ropes in his daughter, partly for Kate’s access as a camp volunteer to an evacuee bus to get them close to the Strip, but also in an effort to mend their estrangement. Kate complicates matters by demanding to accompany them and look for her friend Geeta (Huma S. Qureshi), a young mother who has gone missing inside the city. Also along on the mission is camp coyote Lily (Nora Arnezeder), a feared Frenchwoman who has adapted her human-smuggling skills to this dystopian new world; and Cummings (Theo Rossi), a douche who works as a guard in the refugee camp.

That’s a large ensemble to keep straight, but to the credit of Snyder, his co-writers and the able cast, the characters are all distinctly drawn, with Dieter and Peters providing much of the droll humor. It was a genius casting stroke to bring in Notaro for reshoots and some seamless digital compositing to replace fellow comic Chris D’Elia after sexual misconduct allegations surfaced.

While the zombieverse fathered by Romero has been redrawn multiple times — notably by Danny Boyle and Alex Garland in 28 Days Later and its sequels, and in The Walking Dead, which gets a nod here via the brief appearance of a Lucille-like skull-crushing weapon — Snyder’s mythmaking skills feel sharply honed and fresh. In addition to the generic shamblers that slip into hibernation periods, there’s a horde of more evolved “alpha zombies” led by a hot-bodied king (Richard Cetrone) and his bejeweled queen (Athena Perample). They are faster, smarter, and capable of communication and tactical organization. Lily knows how to appease them with a sacrifice, but a double-cross instantly ends that détente.

There’s no shortage of excitement, suspense, jokey camaraderie, sorrowful losses, satisfying comeuppances, twists and turns to fill the generous running time, with plenty of variation in the bloody encounters. Among the best of them is an attack by the guardian of the alphas’ domain at the Olympus Hotel, Valentine, a zombie white tiger, late of Siegfried & Roy’s act. (Montecore lives!) The stunt work is consistently impressive, with smooth integration of CG and physical action, and a relatively restrained hand from the director with his trademark slow-mo and speed ramping.

While Bautista carries the film on his ample shoulders and the father-daughter reconciliation provides the emotional core, Julie Berghoff’s production design deserves its own star billing. The centerpiece is the interiors shot in a now-closed Atlantic City casino, while the ghost town version of the Vegas Strip was built in New Mexico, a mix of rubble and surviving structural features, with Marcus Taormina’s ace VFX team penciling in the skyline and assorted details. It’s like a war-torn theme park, the ideal setting for chaos, killing and narrow escapes. The energy and inventiveness on display at all levels here — not to mention the sly humor — make Army of the Dead an ass-kicking epic franchise debut.