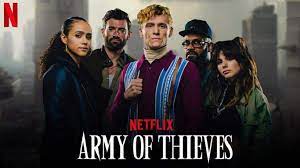 There was a surprising amount of fun to be had in this summer’s gory zombie romp Army of the Dead, a film that turned the not-hugely-enticing prospect of Zack Snyder working with Netflix into something strangely hard-to-deny. It was his most ebulliently entertaining offering for years, and rightly predicting its popularity (it quickly became one of the streamer’s most-watched films ever), Snyder started developing a prequel called Army of Thieves months before it had even landed.

The result is an unusual one, switching genre and director but maintaining the same rambunctious energy, a zippy adventure that pushes zombies to the background. While Army of the Dead was a horror movie with a heist, Army of Thieves is a heist movie without any horror, more formulaic and less memorable but still slickly effective, a strange next step for the Army franchise (a direct sequel and an anime prequel series are also on the way) that strangely works. Thieves follows Matthias Schweighöfer’s German safecracker Dieter before he ended up in Nevada, six years ago as the zombie outbreak began. We see it on TV screens and in dream sequences but never up-close, the characters amusingly unbothered by the impending apocalypse. Dieter is a safecracker only in theory, posting YouTube tutorials that nobody watches while going about his humdrum life as a lonely bank teller. But one day, he receives a mysterious message that leads him to Gwendoline (Game of Thrones alumna Nathalie Emmanuel), who enlists him as part of her crew of thieves (Guz Khan, Stuart Martin and Ruby O Fee) to crack the world’s most impossible safes.

There’s nothing markedly necessary about universe expander Army of Thieves, niche fan service that gives backstory to a character who we know dies later on, but Schweighöfer, also acting as director, keeps his frothy caper afloat with a light knockabout tone, never insisting the film as anything that it isn’t. The script, from the Army of the Dead co-writer Shay Hatten, is stitched together from the heist movie playbook with no grand attempts to reinvent the genre, coasting on the simple pleasures of formula but he joins the dots with just about enough charm as we follow the ragtag team from city to city (a Netflix film with multiple locations is not to be sniffed at) and safe to safe. What the film does manage to bring to the table visually is a more immersive representation of what cracking a safe actually entails, some nifty effects taking us inside the mechanics of the safe as Dieter works his magic. It’s a neat trick that adds vibrancy to an often rather unengaging process.

Schweighöfer’s goofy-but-goes-to-the-gym schtick is hard to resist, the kind of warm, well-calibrated performance that Ryan Reynolds often tries, and often fails, to give, and he’s as confident behind the camera as he is in front, buoyed by a grand Hans Zimmer score, a bold studio sizzle reel that should lead to more Hollywood work. Emmanuel, who showed romcom charm in 2019’s likable Four Weddings and a Funeral TV series, carries some of that through here for a sweet, if a little anemic, romance with Schweighöfer. It’s a little overlong for a film that should feel breezy, at over two hours, with the last act a little saggy as the inevitable double-crosses and “oh but that was really what was happening” reveals spill out (the narrative twists and turns are not quite as whip-smart as the film seems to think they are). But there’s an intriguingly doomed sadness that comes to the foreground at the very end, given the fate of Dieter’s character (recalling the finale of Black Widow), and it ends the film with a punch.

There’s an immense satisfaction to relaxing into an old-fashioned genre film that’s content to hit simple, familiar beats with finesse, no more no less (something that also makes the streamer’s new western The Harder They Fall a winning watch), and the low stakes sturdiness of Army of Thieves marks it out as one of Netflix’s more enjoyable originals of late (it’s a heist movie about heists not a heist movie about, say, trauma). As the platform’s unending stream of cheaply made TV movies continues, here an important combination has been cracked.

Army of Thieves is available on Netflix on 29 October