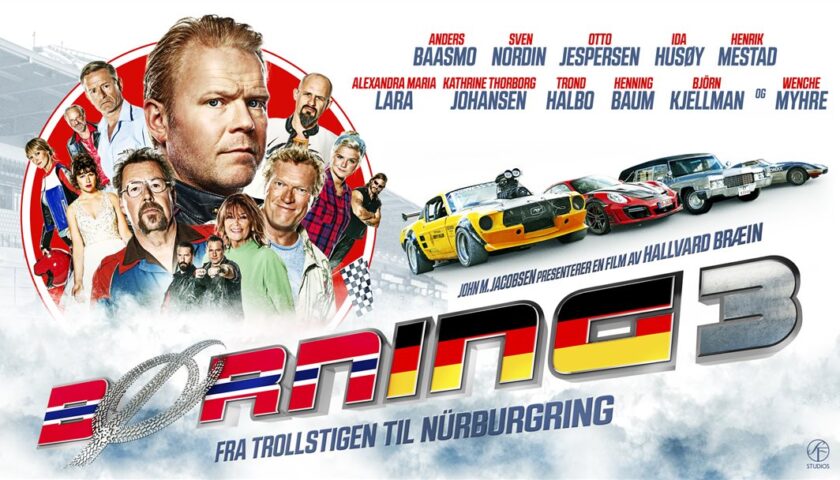 CGI has come a long way since its early origins in the 70’s. From the incredible dinosaurs in Jurassic Park to the breathtaking graphics of games like The Last Of Us Part II, the future looks very bright for this medium. Unless you’re watching Asphalt Burning that is.

There’s a moment (1:06:54 to be precise) in this movie that’s so hilariously bad I had to go back and re-watch it three times. Within this CGI segment, a police car whizzes through the air, hangs up the side of a dock before comically falling into the water like a cartoon. Given this is listed as an action comedy, it’s telling that the only comedic moments come from seeing these awful CGI cars.

Before we actually dive into this though, let’s backtrack and examine what we’re working with. Netflix doesn’t actually tell you but Asphalt Burning is not a stand-alone movie (something I unfortunately only found out after watching this) and instead serves as a third title in the ongoing Danish series of movies called Burning (Børning).

The story here is pretty barebones, even without the added context of the previous movies, and revolves around bad-boy racer Roy who’s on the verge of getting married. Unfortunately, he loses a race up the mountain to secure his sweetheart, Sylvia. The victor? A woman called Robyn whom Roy had kissed the previous night in a state of ecstacy. Oh dear!

With the secret spilled and Roy’s future hanging by a poorly rendered, CGI thread, Roy’s only hope comes from traveling to Germany and racing the Nürburgring to win back Sylvia and save the day.

Part Fast and the Furious bootleg, part 80’s road trip movie, Asphalt Burning pads out its run-time with several montages and a host of colourful supporting characters, including comedic sidekicks Doffen and Nybakken who engage in their own sub-plot involving a dead old lady.

When it comes to comedy, outside the CGI scenes this movie isn’t particularly amusing. There’s a recurring joke involving different guys called Roy (get it, because they’re all called Roy!) which are repeated constantly. There’s also a dead old lady who’s paraded around while the final scene involves a rogue tyre battering a character in the face.

Of course, it pays to watch the previous two films for context but given Netflix have literally just listed this as “Asphalt Burning”, with no context to the previous movies, many people will go into this and watch it thinking this is a standalone movie. Then pause after 20 minutes to check they haven’t just loaded up a dodgy DVD from the neighbourhood pirate.

Asphalt Burning is a burning mess of a movie, one that’s listed as an action comedy but fails to nail either particularly well. There’s not even that much racing action either. This is not a film to remember and the fact Asphalt Burning manages to make The Fast and the Furious look like Oscar-worthy material is telling unto itself. Avoid.