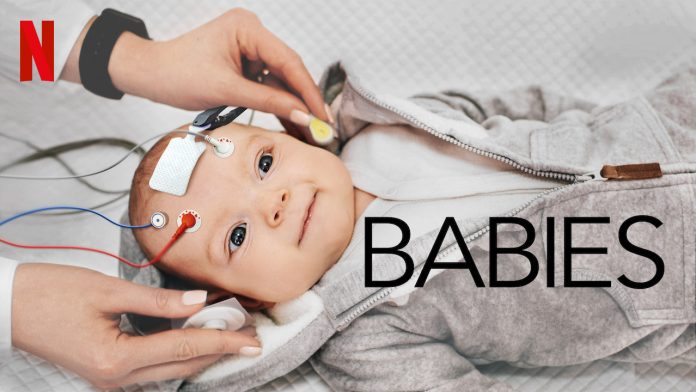 Each of the episodes of this documentary series has two parallel sides: one follows a handful of babies from birth through important developmental stages during their first year of life and the other presents 2-3 examples of experimental work in the area that is being discussed (attachment/bonding, food, crawling, sleep, language, walking).

The first side (babies and new parents) is a glimpse into the life-changing first months of having a new baby. The parents are honest about the excitement, struggles, and worries of those crucial months. The babies are cute. It’s fine, but no more than what you get from browsing home videos on youtube.

The second side should be the exciting one: cool scientific experiments! However, there are several major drawbacks: many of these experiments are still in progress, so we don’t really get any concrete answers, while others are ambiguously concluded. The documentary completely neglects to give us any overview at all of the state of the art in each of the reported scientific fields. Are the experiments we are being shown at the cutting edge? Are they small pieces of larger puzzles? Have they been replicated / are their results supported by other studies or are they controversial?

To give just a few examples: In the segment on attachment, there’s an experiment about the effects of caregiver responsiveness on the baby’s brain structure. It shows that when the caregivers are less responsive i.e. do not immediately respond to/comfort the baby, the baby’s hippocampus grows *bigger*. What does this mean? Surely a more developed hippocampus is a good thing? Is it not? Isn’t this contrary to the study’s expectations? None of these questions are addressed, except a vague conclusion “so when you are a responsive parent your kids feel safe to explore more” – huh?

In the segment about growth, there is a pretty counter-intuitive claim that babies do not grow gradually, but in sudden daily spurts (so they stop growing for several days and then one day they’re suddenly 1.5cm bigger). This claim is based on a pretty primitive methodology (the researcher shows how hard it is to “stretch” and measure the length of a baby) applied a few decades ago, which doesn’t seem to take any other factors into account. We are left with “when this study came out it got on the front page of several newspapers but it got a huge amount of backlash from the scientific community”. And then? Has it been replicated? Confirmed or debunked in the decades that followed? We get no answer.

In the segment about sleep, the researcher investigates brain activity when twitches occur in sleeping babies. The twitches are linked to short spikes in brain activity. Somehow, from that, they conclude that the brain is running little checks in order to learn more about the body (a bit like a short diagnostic – “legs:check, fingers:check”). They present it as a developmental stage without explaining why adults (humans and animals) still twitch in their sleep, surely it’s not part of development if it occurs in all ages? We get no answer.

Also, for some weird reason we get to learn random personal details about the researchers (I guess the brief was: “how did you get to become a researcher in your field”) which includes seeing them dance, swim, walk their dog, go shopping etc. It’s not (mostly) in bad taste, but it feels odd and irrelevant.

With such a fascinating topic, Netflix could have done much much better.