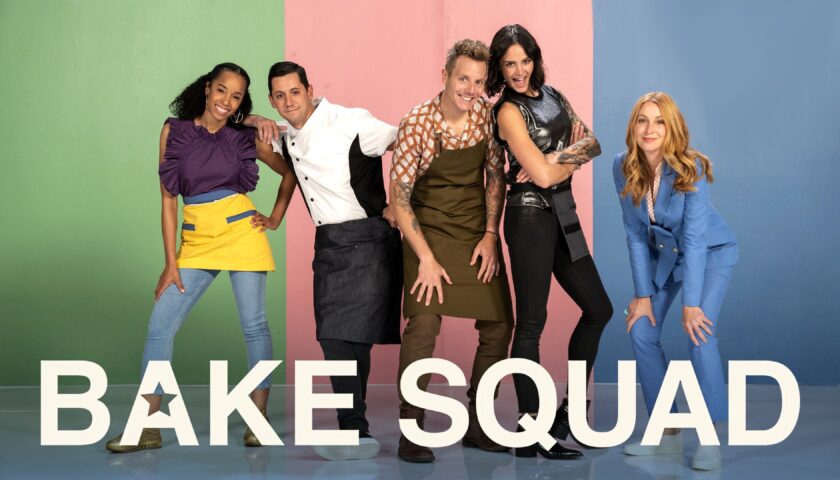 We’re introduced to Christina Tosi, who founded the Milk Bar bakery, who handpicked four expert bakers to make her “Bake Squad” for this competition series.

In the case of the first episode, Cynthia is the picker; she’s throwing a birthday party for two of her six boys (which means she’s a saint of a woman), and she wants a special cake that incorporates both their interests. The bakers have seven hours to conceive and create their masterpieces.

Christophe, whom Tosi calls a “pastry illusionist,” decides to take the boys’ love of ice cream and make a giant ice cream cone-shaped cake, using blackberry compote, a bunch of different cake layers, and dozens of homemade waffle cones spread around. Tosi helps him figure out something to help mold the cone by grabbing a bright orange traffic cone from backstage. He also creates individual cone cakes, and puts a blown-sugar cherry on the top of the big cake.

Maya-Camille, a “flavor fanatic,” makes a house to appeal to the older son’s love of building things. She also makes a lawn out of marshmallows, a basketball court, and other fun things. Tosi encourages her to put a second level on the house. Ashley, “the queen of cakes”, takes the boys’ love of pizza, mac and cheese and spaghetti and meatballs, and makes a three-tier cake that evokes all three.

Finally, Gonzo, “a champion of chocolate”, takes their love of dragons and makes a massive chocolate egg, with eyes and claws sticking out of it. Inside the egg are smaller eggs for each of the boys, each with treats inside.

Like we said, Bake Squad is a competition show in a sense, but not like the other baking or cooking competition shows you’ve seen to this point. The squad is the same in every episode; it’s just the challenges that are different. And it seems like the four members of Tosi’s squad get along unnaturally well, to the point where they consult with each other and help each other when needed.

In the first episode, for instance, Gonzo needed help from Ashley and Maya-Camille to move his massive egg onto the display platform and hold it while he secured it. In another sequence, Ashley asks everyone for their timers so she can time out the baking and cooling of the nine (!) different cakes she was making for her three-tiered masterpiece.

While competition in other shows like this is friendly, it’s not usually this friendly. But when nothing’s at stake except pride — no one gets eliminated, and no one wins or loses any money — these people can be this magnanimous with each other. It’s certainly refreshing but doesn’t exactly make for the most scintillating TV.

The show is really more about the craftsmanship of these bakers than anything else, and it’s pretty remarkable, given the time constraints. Which leads us to two other complaints. One of them is the fact that much of what both Gonzo and Maya-Camille did on their projects had nothing to do with baking; in fact Gonzo never even approached an oven. The show is called Bake Squad, after all, and it seems that if half the quad doesn’t bake anything, the show should be called something else.

The second complaint is one that’s inherent in any of these studio-based, timed competitions, where the host shouts “one hour left!” and we see quick edits of the chefs frantically finishing up. Here, we didn’t believe that where the chefs were shown meshed at all with how much time they had remaining. At the supposed one-hour mark, it felt like most of the chefs were still far away from finishing what looked like some painstaking tasks. But by the time they had to step back, everything was done. We never believe most of the chefs are under nearly as much time pressure as the edits make them look to be, but here, it just felt a bit off and careless.