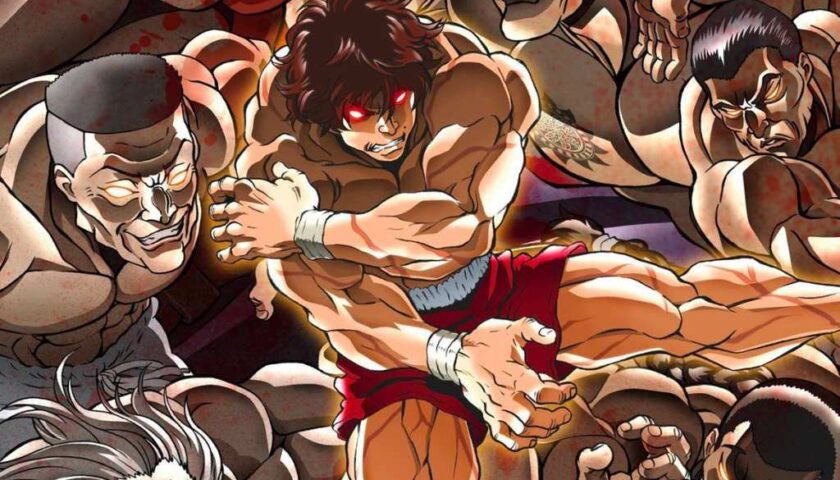 Baki Hanma Season 1 is a Netflix Original shonen anime produced by TMS Entertainment. Baki Hanma strives to be the fighting equal of his legendary father, who is known as The Orge. Possessing incredible strength and combat abilities, Baki must go to extreme measures to become the equal of his old man. But no challenge is too daunting for Baki.

There is no single theme more familiar to the shonen genre of anime than the quest to be the strongest. While this theme is not a requirement for a series to be shonen, it is prevalent throughout the genre. Going all the way back to early series like Dragon Ball Z to modern mainstays like My Hero Academia, the quest to be the best is nearly omnipresent. As with any theme that becomes heavily utilized in a genre, a story that wishes to use the theme needs to put a unique twist on it if it wishes to stand out. Sadly, a failure to accomplish this is just one of Baki Hanma Season 1‘s many shortcomings.

Anime as a medium is overflowing with larger-than-life characters. While this phrase is generally used to describe the characters’ personalities, Baki Hanma Season 1 takes this expression a bit more literally. Baki, as well as any individual capable of throwing a punch, is depicted in physical proportions that border on the grotesque. These over-muscled hulks reminded me of the worst offenses of comic book art from the 1990s. The show desperately wants the viewer to be impressed with these twisted masses of muscle it portrays as people. But it never manages to sell them as something that comes across as impressive. While the visual design of the characters is bad enough, the personalities at play do little to help them either.

The most likable of the main characters in Baki Hanma Season 1 is Baki himself. Alas, this isn’t so much because he is particularly likable, as he is just the best of a bad bunch. Baki is an incredibly one-note character whose only primary emotional expression is confidence. He portrays little else throughout the show’s 12 episode run as he seeks to confront the strongest fighters he can to prepare for a showdown with his dad.

The rest of the major players rarely manage to be more than downright detestable. Even those that the show seems to want you to like are sorely lacking, unless you consider pissing on your opponents endearing. These often sophomoric caricatures of people are failures in most senses of the word. Even when the show tries to bring a sense of honor or nobility to them, these attempts feel so false or misplaced that it only makes them feel shallower.

As far as the overall story structure of Baki Hanma Season 1, it manages to bring a coherent tale to the season. Filled with numerous ridiculous moments and concepts, this story definitely taxes the suspension of disbelief at times. And while anime often rushes headlong into the ridiculous, this series fails to utilize the charm and magic that often accompany productions that take their stories clear over the top.

Beyond previously mentioned character designs, the show’s visuals are fine. The biggest failing they have is how little the fights deliver. Much of what passes for fight animation are still shots of attacks at the moment of impact while the action is clipped around. This is especially frustrating with how much time the show spends building up to the various fights. Given how well TMS Entertainment has done with action in other recent productions, this was a huge disappointment to me.

When all is said and done, Baki Hanma Season 1 is a lesser example of the quest for strength that permeates the shonen genre of anime. While there may be moments that will appeal to some, there are numerous other offerings out there that do everything this series does, but better.