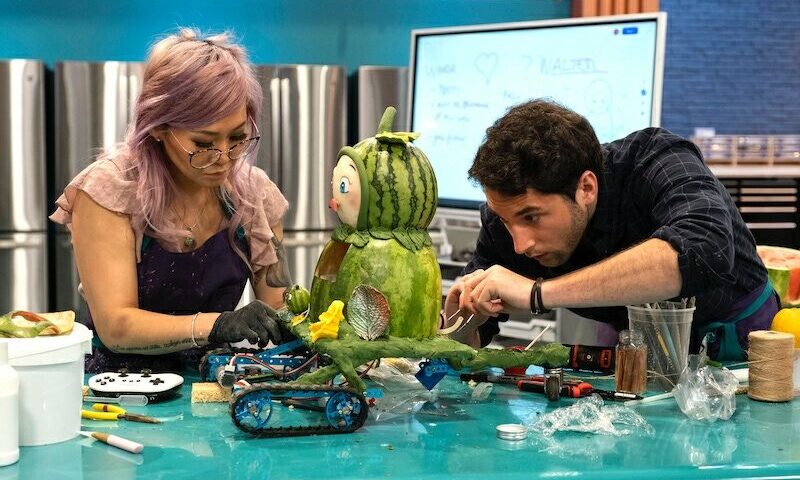 Host Justin Willman (Magic For Humans) walks through a door and says, “Welcome to the inventive and delicious world of Baking Impossible.”

Baking Impossible is a competition where teams of bakers and engineers — put together by judge and preeminent “bakineer” Andrew Smyth — make mostly-edible creations that can withstand a particular week’s stress test. The winning team of each “mission” gets a leg up on the next one, and the losing team goes home. The overall winning team gets $100,000.

In the first “mission”, the teams, who are just being introduced to each other, have 9 hours to build a boat. There are a few requirements, including a “dessert” element that will be judged on the usual food show taste/texture standards. There will also be sails and a remote-controlled rudder.

But here’s where things are different: The boat will be stress tested in a 20-foot tank, with fans blowing wind into the sails. The boats must traverse the tank, which is also laden with a jagged shoreline and other hazards, without toppling over or sinking, in 45 seconds or less. Judging along with Smyth are astrophysicist/inventor Dr. Hakeem Oluseyi and chef Joanne Chang.

The teams of “bakineers” have to contend with making a hull that’s buoyant but also needs to be able to handle the weight of what’s on top. Many picked Rice Krispies Treats as hull material, but one team used chocolate, because it’s waterproof, and another team used something called dead dough. When the time came to put their creations to the test, only a few made it to the other side of the tank. But even the ones that fell over or sank would still be judged on the dessert portion, as the bakers were told to make extra portions, just in case.

Viewers of The Great British Baking Show might remember Smyth from the engineered confections he created as a contestant on that show in 2016. He’s a producer of Baking Impossible, which makes sense, because the entire concept of “bakineering” started with him.

There’s real potential for Baking Impossible to be an interesting competition, but we don’t think that will start to happen until the teams are winnowed down a bit. There are so many teams to start with, that we barely get introduced to them before the actual competition starts. We get to know a few of the teams as the mission wears on, but many of them get no coverage at all, even when they’re putting their creations in the water for the stress test.

Once the teams get cut down a bit, more time can be devoted to both sides of the equation. We want to hear more of the engineering details and see them mesh with the materials that the bakers know will work. Also, there’s a missing opportunity to explore a dynamic of a team that’s thrown together at the beginning of the competition instead of entering as a unit. Will they grow together as the competition wears on? Will they end up hating each other and fight?

We see an element of that during the stress test when one team member gets so enthusiastic about the fact that their boat can float that she forgets to work the rudder and the boat gets stuck. Her baker partner is visibly annoyed, but that seems to be the extent of things. But it’s also the beginning of the competition; it’s natural to be more good-natured at this point, but will sparks fly when the stakes get higher? Even a little bit of conflict will help the show move along better.