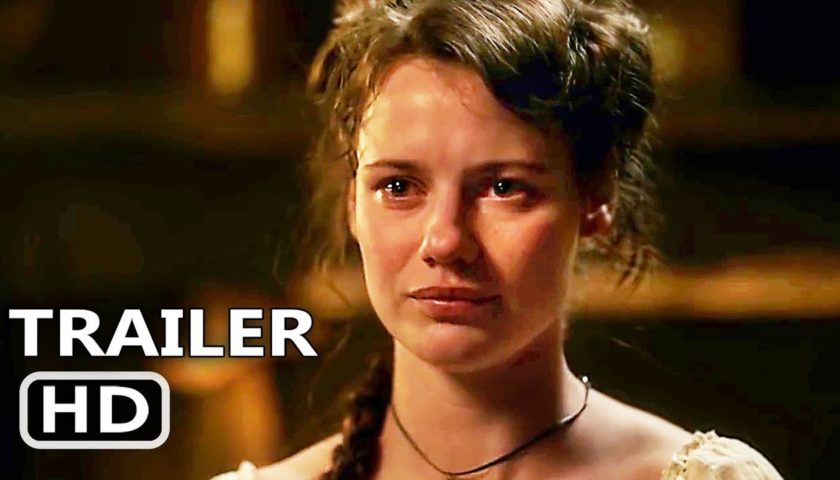 Pinning “Barkskins” into a particular genre box is a tricky task. On the surface, this National Geographic TV adaptation of the Annie Proulx novel appears like a down-the-middle historical fiction prestige play. Set in the colonial region of New France in the dwindling years of the 17th century, there’s a familiar makeup of the setting: The wood-built settlements of Wobik are made up of candlelit rooms of modest interiors, while earthen pathways make up the centuries-past equivalents of bustling city streets.

The players in this drama are a cross-section of the kind of characters usually seen in these stories of early colonial intrusion into the Americas. There’s the company man, Hamish Goames (here of the Hudson Bay variety; played by Aneurin Barnard), the observant innkeeper, Mathilde (Marcia Gay Harden), the European eccentric, Claude Trepagny (David Thewlis), and ambitious regional entrepreneur, Elisha Cooke (Thomas M. Wright). All of them are trying to keep a tenuous grasp on the competing interests in the area.

Yet as this season’s eight episodes unfold, there are hints that “Barkskins” is trying to dig deeper than the surface-level trappings of similar stories. Melissande (Tallulah Haddon) and Delphine (Lily Sullivan) are two young women looking to join themselves to a family thousands of miles from their French homes. Rather than take their places as a given and consign them to the background, “Barkskins” takes time to explore the downstream effects of the conventions of marriage and family that women like them were thrust into. Some of these New France colonists see the native peoples of the area as a monolith; “Barkskins” offers viewers opportunities to see the shortsightedness of those assumptions as well.

The parts of the series that stand out most are those that feel unmoored from those kinds of conventions. The dynamic between Goames and his fellow Hudson Bay envoy Yvon (Zahn McClarnon) is introduced as a two-man investigative team, but becomes one of the show’s bedrocks as it moves past those buddy cop-adjacent origins. Thewlis is right in that ideal zone between distant, removed oddity and his ugly cartoonish “Fargo” antagonist. And underscoring all these developments is another fascinating atmospheric score from Colin Stetson (“Hereditary”), whose bass sax-led compositions are the frequent rumblings signaling the coming storms.

While the expansive nature of the ensemble leads to many of the strengths of “Barkskins,” it’s also the element that at times makes the show feel thin around the margins. As the season advances and true motivations start to become more apparent, there are players in this convoluted web of uneasy alliances that do get short shrift. For as much as the show eventually addresses the way that the Iroquois people are labeled as aggressors and enemy combatants, “Barkskins” is still strongly rooted in the colonial perspective. The Native characters offered the most interiority are those who exist within the confines of Wobik, in this society imported from across the Atlantic.

That missing piece is underlined as the season slowly shifts. Certain presumptive elements of the series take hold in the first half of the season — when a particular new player makes their entrance around that halfway mark, it’s both a signal of how much “Barkskins” is trying to play on audience expectations and a conscious withholding of what ends up as one of the series’ most compelling threads. The result is that cross-section of tenuous pacts that gives “Barkskins” a kind of murkiness that alternates between illustrative and frustrating.

The New France of “Barkskins” is an area of violence, but it’s not restricted to any particular subset of the population. Though the series doesn’t shy away from showing a few vicious attacks, it doesn’t rest on using those moments as a standalone shortcut. Opening the series with an attack on a settlement establishes an undercurrent of brutality that expresses itself in various ways as the reality behind that attack comes more into focus.

Beyond simple physical violence, there’s the violence of systematic oppression, explored in how the political and economic authorities in this region use their colonial influence to exert control. They become the backroom dealers, the men who over time shed their ostensible roles in society and business to reveal the true nature of their presence in these lands.

So, while “Barkskins” may not quite have the bandwidth to fully investigate all of its interweaving pieces, the tapestry that eventually results from this season is one about the consequences of sowing distrust and chaos. Polarization, public shaming, and the seeking of profit at the expense of the human lives left in its wake all rear their heads in a world four centuries before our own. It’s those thematic threads that, particularly as the show reveals where on each side of the divide these characters stand, provide as strong a base for “Barkskins” as anything else.

All the way through the season, there’s an anarchic spirit simmering under the surface of “Barkskins.” Where most historical fiction seems like it’s arcing toward some grand thesis statement of a fixed point in time, “Barkskins” is just as much about foreshadowing the problems of the resulting generations as it is capturing a bygone moment. It might not always lead to the tidiest, easy-to-wrangle storytelling, but it ends up reflecting its time and our current one in a way these kinds of shows are not always able.