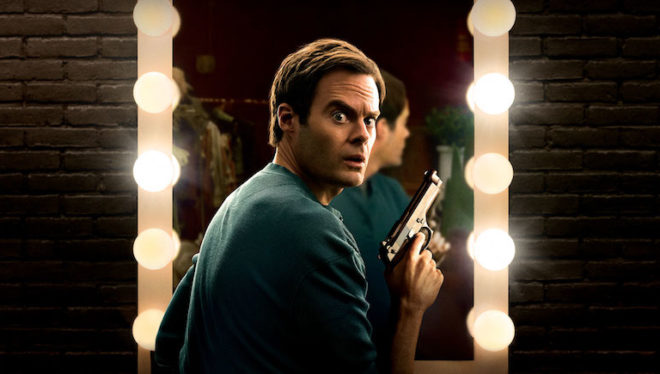 Review: Right from the get go I knew this would be a gem, from the trailers to the clips, there was something unique and charming about it. Happily I was not disappointing as the show now has my full attention and I really liked it, looks like another HBO. So you know the premise, killer gets dragged into an acting class, finds out he loves it even though he sucks, now he wants to balance killing with his new found passion. But without giving anything away, there is more to the story than just that. The writing was as witty and charismatic as I expected, kind of reminded me of Dexter. The producers are known for some pretty big shows like Seinfeld, Silicon Valley, and of course Bill Hader himself. So its no surprise we have another fun little show on our hands.

Bill Hader’s performance is just as unexpectedly good as everything else in this show, his character is very intriguing, unique, and fun to watch. Same goes for all the other actors like Stephen Root and Sarah Goldberg, such a great chemistry everyone has makes for a good show so far. I’m fully invested in the show and very much look forward to seeing the entire thing. The story clearly has many directions to go in and I can’t wait to see what was created.

No, I’m not saying Barry is anything like Breaking Bad in terms of quality or cultural relevance. What it is though is a great juxtaposition of two very different worlds, and Hader does a great job playing a guy who has been forced into a box he doesn’t belong in, or at least doesn’t want to be in. He’s also another comedic actor playing a more serious role here, and while the show has only shown brief flashes, it has the potential to be something really good.

The one major mistake the creators could make though is to move more towards “comedy”, because Barry is absolutely at it’s best when it’s a drama with some funny moments, like BB. Again, I’m not saying Barry is on the level of BB at all, more so it just reminds me of the potential of BB in season 1 before it became the non-stop thrill ride and tour de force it eventually became in subsequent seasons. Barry has the potential to be that on a “junior” level scale, but if the creators lean towards highlighting the “comedy” aspect as time goes on it’s just gonna suck. In a perfect world this would be a 1hr show that was more drama than comedy, but even with what we have so far I’m very excited to see where this show goes next.