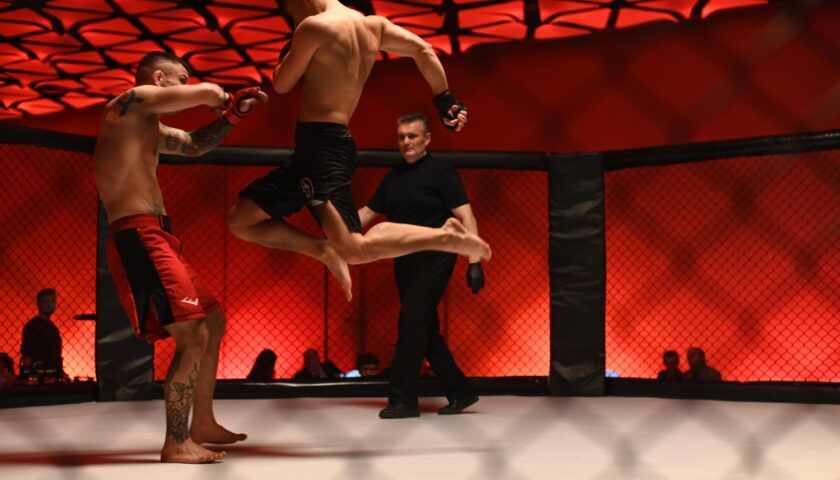 Films about MMA tend to follow the glamorized Rocky model, so you can at least give props to the new Polish Netflix Original Bartkowiak for some of the more realistic mixed martial arts choreography I’ve seen in a movie. There’s still a fair share of dramatic ridiculousness, obviously, but when two combatants lock up to grapple, the scrambles, positions, and submission holds have a welcome note of authenticity. It’s just a shame about the plot.

Of course, in a film like this, the plot exists simply to excuse the fights, but Bartkowiak doesn’t have enough that you can just happily ignore the context. The titular Tomek Bartkowiak (Józef Pawlowski) is a disgraced MMA fighter whom we see getting battered into unconsciousness in the opening scene, but the exact circumstances of his disgrace are a bit nebulous. Either way, he gets into the nightclub security business, taking over the family club after the unfortunate death of a sibling, whose demise he learns wasn’t an accident but instead the result of saying no to the kind of people you just don’t say no to. Any discerning moviegoer will have a very good idea of where all this is going, and they’ll be correct.

There are some things to like, though. The aforementioned action choreography is one of them. Some of the character dynamics are also decent if a little thin. Bartkowiak has a romantic connection to Dominika (Zofia Domalik), the daughter of his former coach, Pawel (Szymon Bobrowski), who was ruined by the fight Bartkowiak lost and has turned to alcohol since. That opening fight with a tattooed, unsympathetic bruiser named Repec (Damian Majewski) becomes a rivalry that stretches across the entire 91-minute runtime when it quickly and predictably becomes apparent that he is an enforcer for crime boss Rafal Kolodziejczyk (Bartlomiej Topa), who has designs on the club. These aren’t necessarily characters with any depth. but they’re played with enough sincerity that it’s easy enough to buy into their plights if you’re willing to meet the movie halfway.

Bartkowiak might not be original, but it isn’t aggressively silly or stupid, either, which means it occupies a middle ground as a semi-serious actioner that’ll please established genre fans without courting any new ones. I enjoyed it for what it was, but I’ll probably have forgotten all about it tomorrow.