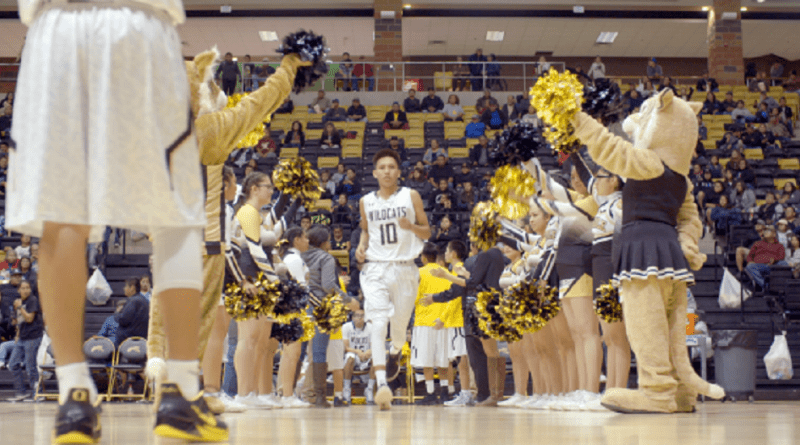 Netflix docuseries Basketball or Nothing is cut from similar cloth as Last Chance U — both follow sports teams populated by young players who face personal hardship, and pin their hopes on their success on the fields and courts. The new series follows the Chinle Wildcats, a rural Arizona team based on a Navajo reservation where one statistic is revelatory: the population is 4,500, but the high school basketball stadium seats 6,000.

A drone flies through a postcard-worthy red rock formation in the Arizona desert.

In Chinle, there’s no movie theater, no minor-league sports teams, no nightclubs. But there’s a high school basketball stadium, where the Chinle Wildcats play “rezball,” an uptempo, run-and-gun game in which undersized players try to out-hustle bigger, taller opponents. That has to change, though — second-year coach Raul Mendoza wants his team to stop running willy-nilly all over the court, and apply discipline to this strategy.

It’s crucial that these boys listen to him. Mendoza is a 40-year coaching veteran who knows how to win. It’s the 2017-18 season, and the Division III Wildcats have the skill and talent to take a serious run at a state championship. It won’t be the same next year. Seniors on the team will graduate. For many of these players, college is wildly unaffordable, and isn’t realistic without athletic scholarships. Winning will help. Immensely.

The opening episode of this six-part series profiles two key Wildcats. Josiah Tsosie is a scampering waterbug of a point guard whose alcoholic father abandoned the family; standing over a basket overflowing with Josiah’s sports medals and ribbons, his mother and younger sister tear up as he recalls a time when they had no running water or electricity. Cooper Burbank is already a team captain as a sophomore, and has a good shot at being Chinle’s first Division I college player; he sits in his bedroom, surrounded by posters of NBA stars, and dreams big about being the next Kevin Durant.

The Wildcats travel two hours by bus for their first game of the season against the Snowflake Lobos. It’s an up-and-down affair: They look outmatched at first, but quickly erase a deficit and sprint to an 11-point halftime lead. Mendoza preaches mental focus and, of course, discipline. He temporarily benches Josiah for playing too wild. Snowflake battles back to tie the game in the final seconds. And finally, the Wildcats execute as their coach directs: They pass. They run. They pass. They pass. They run. They pass. And finally, Cooper gets open and drains a gorgeous three-pointer to ice Snowflake. They win — but they could’ve won by 15, Coach says. On to the next game.

Directors Matt Howley, Michael Lucas and Gabriel Spitale clearly know how to stoke empathy without blatantly manipulating their audience: They simply point their cameras and tell the story earnestly. Unlike other sports docs, Basketball or Nothing foregoes the overdramatic cheesiness of voiceover narration, pushing the voices of Chinle to the forefront.

It’s a wise decision artistically, and sets the tone for the series, which feels authentic, and avoids the tonal and stylistic trappings of reality TV. You’ll get plenty of that on another Netflix sports-doc, Formula One: Drive to Survive; a quick comparison of the two series clearly delineates the different choices directors make when profiling wealthy professionals and hardscrabble Native American kids. There’s no need for Basketball or Nothing to manufacture drama — it just needs to capture it.

This series presents a more honest reality, and the title implies a clear dearth of hope in Chinle, a community besieged by alcoholism and poverty. Basketball is obviously a much healthier addiction for players and fans. Notably, the series thus far hasn’t directly addressed the politics of Native American reservations, but it certainly lurks on the fringe of the story, and in the imagery — jogging down down a beautifully desolate desert road, Josiah runs past a broken refrigerator and discarded furniture, symbols of a politically isolated community rife with tragic neglect.

It’s fascinating to see a coach of Mendoza’s stature — he was profiled in The New York Times — drive a battered 30-year-old truck and launder his team’s jerseys himself. It’s clearly a labor of love. Curious is the contrast between the Wildcats’ colorful state-of-the-art stadium and the battered homes of the players; I fully expect future episodes to dive deeper into this compelling Hoop Dreams-style story.