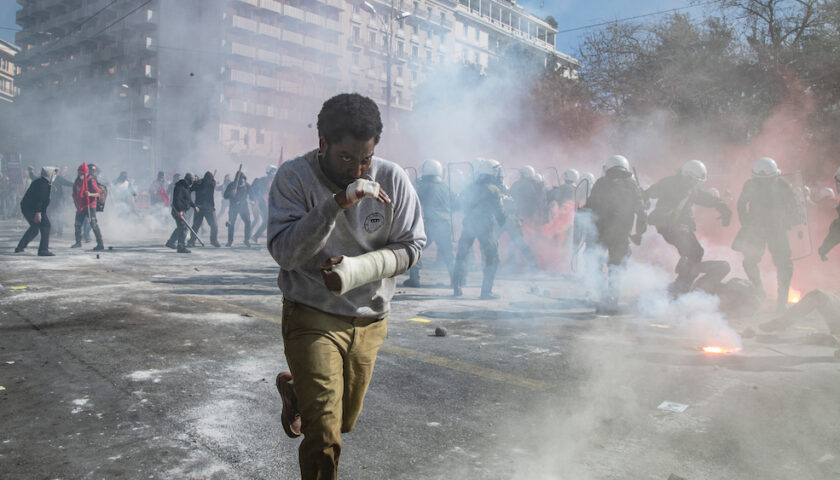 When the pandemic first started raging across the globe last year, it was natural to appreciate the movies that allowed us to travel the world from the relative safety of our own homes; now that this crap been making life miserable for a full 18 months, it’s become even more natural to appreciate the movies that make us never want to go anywhere ever again. Enter: Netflix’s tense and prescient “Beckett,” which — despite being shot during the summer before COVID — follows the recent likes of M. Night Shyamalan’s “Old” and HBO’s “The White Lotus” with another welcome reminder that vacation is actually a total nightmare that will kill you a lot faster than sitting on your couch.

In a certain light, “Beckett” might even be the most nightmarish of the lot, as this paranoid thriller from Luca Guadagnino protégé and frequent second unit director Ferdinando Cito Filomarino unfolds with a dream logic that should prove all too real for people who regularly find themselves running from shadows in their sleep.

The story is simple to a fault: A couple of very attractive but otherwise normal tourists named Beckett (John David Washington) and April (Alicia Vikander) decide to deviate from their itinerary and ditch Athens for the countryside when the Greek capital is roiled by protests over the government’s latest round of austerity measures. As they drive to a remote inn after a long day of wandering through ancient ruins and exchanging the ominous dialogue of movie characters who are minutes away from disaster — “We’re not supposed to be here,” April says for no apparent reason. “I mean, no one knows where we are, and it’s just the two of us. Figures in a landscape.” — Beckett falls asleep at the wheel and sends their rental car flying through the concrete walls of a roadside house. April is dead by the time medics arrive on the scene, and Beckett’s only solace is that the squatters he almost flattened with the car (undocumented refugees?) have scattered into thin air seemingly unscathed.

Or maybe that’s not such a comfort, after all. When a guilt-ridden Beckett returns to the scene of the accident after lying about its cause to local authorities and April’s parents, the police who took his statement begin shooting at him; not because they mistake Beckett for someone else, but rather because they know exactly who he is and what he knows (even as Beckett himself begins to doubt both of those points). While our hero may be convinced that he’s stuck in a wrong man thriller, the bullets that whizz by — and sometimes into — his body sure feel like they’re being fired at him with conviction.

Every car he takes or train he sneaks aboard is heading towards harm. Every too-quiet town he wanders through feels like it’s one moaning villager from turning into the first level of a new “Resident Evil” video game. Every civilian he asks for help winds up dead, including the poor apiarist who lends a desperate Beckett their cell phone during the most inadvertently hilarious bee-stinging scene this side of Neil LaBute’s “The Wicker Man.” There is no escape. The nightmare vibe is so pervasive that conspiracy-minded viewers might wonder if the whole movie is an Ambien trip that Beckett has after he inexplicably pops one of April’s (massive) leftover sleeping pills at the spot where she died, even though Filomarino’s ultra-tactile aesthetic is less David Lynch than Alan J. Pakula, and Kevin A. Rice’s uncomplicated screenplay is less inclined towards the sinister dream politics of “The Parallax View” than it is the hard realities of “All the President’s Men.”

Indeed, this is an increasingly literal film that’s best enjoyed at face-value, as errant mentions of a nationalist assassination plot and a chance encounter with two German activists — one played with palpable warmth by Vicky Krieps — do little to complicate Filomarino’s spin cycle of a story. Beckett is lost in some beautiful yet foreboding Greek locale (e.g. the Vikos Gorge, the mountains of Tsepelovo, Boyd Holbrook’s American diplomat), he grimaces a lot, someone tries to kill him, he makes an improbable escape, rinse and repeat.

Which isn’t to suggest there’s nothing to enjoy about that pattern, nor how it reflects Beckett’s gnawing feelings of guilt, helplessness, and isolation. For one thing, “Beckett” looks and sounds divine, even on a Netflix platform that tends to flatten the life out of every image. “Suspiria” and “Memoria” cinematographer Sayombhu Mukdeeprom shoots the movie with a fall crispness so bracing that you can feel a chill in the air, while Ryuichi Sakamoto’s score — if a far cry from his most memorable work — flushes the movie with horn squelches of raw menace.

Beyond that, Washington’s reactive and effectively ragged performance is embossed with a vivid sense of hyperreality that makes it hard to tell if Beckett is the only sane person in an absurd situation, or the only absurd person in a situation that makes perfect sense to everyone else. The “Tenant” star is powerless in the face of stiff dialogue (lines like “Oh, my God, I think I’m having a love attack” don’t help), but also displays a visceral everyman physicality that makes good on his action movie bonafides, as well as his background as a college football player.

That Washington is one of the only Black faces in the film also lends Beckett a visible otherness among the olive-skinned Greeks and white supporting cast, though Filomarino seems more focused on the character’s invisibility: The most effective moments in “Beckett” frame the title in a way that accentuates the apathy of those around him, as if his frantic situation were happening on the other side of an event horizon. Thin and politically disengaged as this diverting Euro-thriller can be, it never forgets how even the most desperate of people can be left to suffer in plain sight — nothing but figures in a landscape.