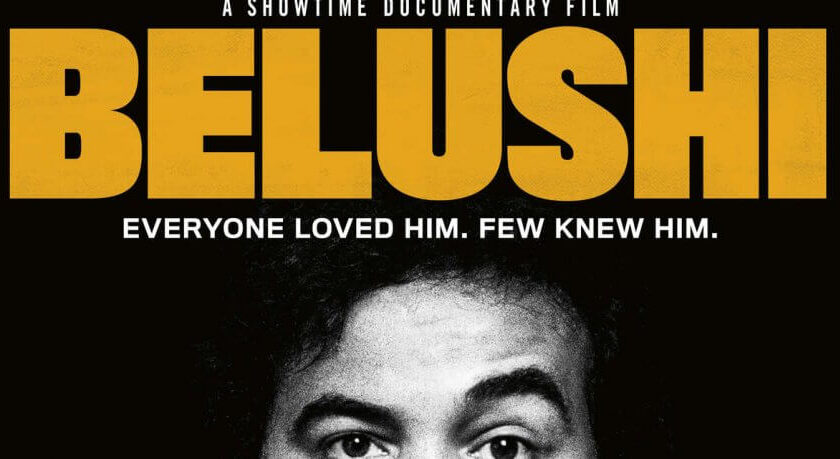 Since my college years, I’ve studied various comedians on either side of the pond and one in particular has polarised me. That would be the enigmatic John Belushi. But after seeing this documentary, it opens up a whole different angle of the work both on and off celluloid, whilst at the same time, filling in the blanks on the much glossed-over beginnings of John Belushi.

He passed before my time and I grew up mostly on American VHS’… so whilst Belushi had a lot of the limelight on US TV, and moderate, but untapped success in the box office, the likes of Chevy Chase, Dan Aykroyd, Robin Williams (my favourite), Steve Martin and that other fella (whose name ex-scapes me here) were prominent exports on the VHS market here in the UK.

But I always knew of Belushi via Blues Brothers and the Steven Spielberg film 1941 and having researched the US comedic circuit in my own failed attempt, I’d always read of Belushi being a massive influence on the styles of many of the comedians mentioned above. I was never really sold though and assumed that this was all afterthought, and I had always thought Jim Belushi was the more ‘successful’ of the Belushi brothers, but after seeing this, I now realise that I was sooooo wrong.

But this documentary fuses various storytelling devices and presentation styles to tell John’s story with overdubs of colleagues, friends and family who knew him best. You see, I’ve always had this thing in my mind about the journey of a performer from comedian to actor and the troubles such a move would bring. It’s happened to nearly every comedian-turned-actor and whilst this is ever-so-slightly touched upon in this film, the two praxis’ are distinctly different in many aspects and the very pressure this shift brings (with fan backlash and critics’… criticism) must play havoc in the mind of the performer.

To my mind, this fulcrum is where the meat meets the bone and you can point to and isolate this crossover in many of a performers career. Nowadays, it’s more or less expected that if you can perform as a comedian, you can perform as an actor. And this is kind of true as the industry as a whole is riddled with cosmic famous stars and celebrities who think they can try their hand at all disciplines. And this is true for most, as the industry has changed so much since the days of the original SNL crew.

But this documentary epitomises the ‘American Dream’ and what it actually takes to climb the greasy pole from ground to up. John Belushi didn’t have rich parents or famous fathers, uncles or friends to give a heave-ho and ‘bend the pole’ for him. He worked his socks off at a time when theatre what theatre, music was music, TV was TV and film was film – nowadays there’s a fusion and the landing pad is so much more wider thanks to fandom, super-agents and over-inflated egos thanks to social media.

These guys were and always be the trailblazers and this documentary is the real rags-to-riches (and everything in between) of the American entertainment industry. It exemplifies the toll and turmoil of the industry and through fine craft and excellent presentation, WILL make you appreciate the artistic craft of one John Belushi.

One thing I always think of when watching a documentary of this ilk is how much it would offer a blueprint for prospective actors, writers and producers, and one of the ;newfangled sounding boards’ of documentaries which precedes a feature film of such a subject. Much like a primer or pilot for TV.

SO… with that… I predict one Tom Hardy (of Inception, Capone etc…) to star in ‘American Guest – The Story of John Belushi’ in 2023/4, streamed live in your living room from Netflix, HBO or Amazon Prime. I would write it myself, buuut NOOOOooooo, having dipped my toe in the murky world myself, I know such doors are guarded by more established and well-connected moguls who have the umpfh, financial clout and connections to get their script through the door. Besides, I’m 1/3rd Albanian, British and Scouse and I’m busy with my hair.

But then, there’s possibly only one guy who could ever write a biopic on the man himself and that would be the great Dan Aykroyd. By jove… what the world could do with now is a little bit of Aykroyd (and Ramis RIP)… But saying all that… go and watch this documentary and see the raw force Belushi was and still is within the industry in all it’s glory and I guarantee you that this overly-long and wafflish commentary will make a little more sense (just a little).

Rest in anarchy Mr. Belushi, you’d hate the what the whole industry has become since your days but would have a HEAP of artistic inspiration to lampoon sir!