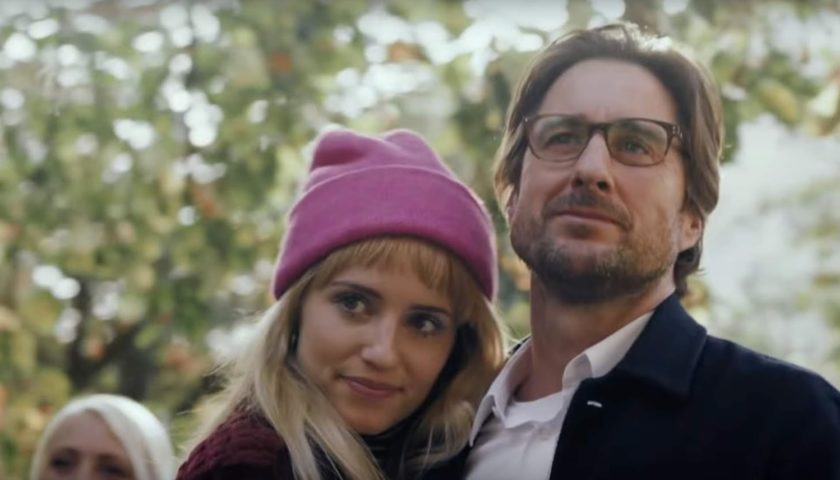 Review: If you truly love Berlin, and belong to the film industry, chances are you’re there right now attending the Berlinale, where roughly 400 movies unspool over 11 days. The Berlin Film Festival takes place annually in early February, one of the least pleasant times of year to experience a city where, in the half dozen instances I’ve been, someone always apologizes for the weather — with its rain, sleet, and iced-over streets — and helpfully suggests, “You really should come back in summer.”

And so, this year, I have no regrets sitting out the festival, choosing instead to visit the city vicariously via “Berlin, I Love You,” the latest in the “Cities of Love” series that gave us “Paris, je t’aime” and similar stopovers in New York and Rio. If you’ve seen any of those movies, you know the drill: The producers pick a glamorous international metropolis and invite a handful of directors to imagine stories that reflect different aspects of the place, weaving them all together into a diverse omnibus view of the city in question.

In the Paris film, each short was set in a different arrondissement, resulting in a hit-and-miss collection of tales from the likes of Alfonso Cuarón, Gus Van Sant, Wes Craven, and the Coen brothers — heavy hitters who had in turn enlisted major stars to participate in their individual vignettes. In “Berlin, I Love You,” there are just 11 directors, and the average moviegoer won’t have heard of any of them. The biggest, Til Schweiger, is one of Germany’s most popular stars, and here he directs a screwy little episode from the mind of Neil LaBute (more on that shortly), but by and large, the film feels aimless and uninspired.

It opens with what must be an homage to one of the most famous images ever captured on film in Berlin — a winged angel — only here, instead of eavesdropping on humans’ thoughts from high above the city, as in Wim Wenders’ “Wings of Desire,” the angel is mortal, a face-painted performance artist (Robert Stadlober) standing frozen on a segment of the Berlin Wall, hoping for tips. Instead, a pretty young busker (Rafaëlle Cohen) sets up next to him and proceeds to chase away any passersby with her warbling voice.

These two, so hostile to one another at first, will gradually come to develop feelings over the course of the film, for theirs is the slow-brewing romance that serves as a framing device for the entire operation. Parceling it out across the feature allows helmer Josef Rusnak to catch up with them in various moods and locations, from the delirious thrill of standing at the center of Mauerpark’s outdoor amphitheater to what feels like a strobe-lit colonoscopy through the bowels of Berghain, where the party rages all night. There’s nothing elegant about the way the other stories are integrated, but at least these two characters offer a semblance of continuity, against which the shorts serve as variably amusing digressions.

That leaves roughly eight to 12 minutes apiece for the other filmmakers to present their stories, a format that works best when there’s some kind of twist, as opposed to a near-instant resolution to a problem that’s only just been introduced. For example, in Massy Tadjedin’s segment, Keira Knightley plays a woman who takes in a refugee for the night while his brother dies of pneumonia in the hospital. Knightley’s character can’t heal the world in that time, but she can at least convince her mother (Helen Mirren) — and maybe the audience — that Berlin is about more than nightclubs and sex parties: “This is reality; this is Berlin; this is what life is right now.”

Cut to a hotel bar where a blonde (Toni Garrn) turns the head of what remains of Mickey Rourke in a silver pixie wig. She’s young enough to be his daughter, role-playing accordingly, although the episode is too short and shallow to be anything more than embarrassing for all involved, especially as Rourke pantomimes the morning-after catharsis that follows his discovery of the message she left scrawled in lipstick across his bathroom mirror. This short was LaBute’s contribution to the whole and doesn’t feel in any way related to the city of Berlin, much less life on planet Earth as we know it.

The same could be said for Mexican director Fernando Eimbcke’s contribution, in which a 16-year-old (Michelangelo Fortuzzi) strikes up a conversation with a bedraggled drag queen (Diego Luna). Granted, one witnesses some fairly outrageous personalities in Berlin, and there’s a certain stunt-like appeal to seeing Luna decked out like this, in faux fur and sequins, sharing a beer beneath the Oberbaum Bridge. Still, there’s something entirely too cutesy about the encounter, in which the curious teen coyly asks for a kiss — a Disney-fied, 21st-century spin on “Cabaret” perhaps. On the other end of the spectrum, Dani Levy’s chapter takes place in a neon-lit brothel that looks like something out of a Gaspar Noë movie.

The most effective sequence may be “Glee” actress Dianna Agron’s offering, in which Luke Wilson shows up as a Hollywood director suffering post-apocalypse-movie burnout who finds fresh inspiration after flirting with a lovely — and far less jaded — children’s puppeteer (played by Agron). Two of the other segments involve crossing Berlin by car: one about a magic, matchmaking BMW and the other involving a taxi driver pulled into a Jason Bourne-style intrigue. Each is silly in its own way, although at least it can be said that these two sequences serve to showcase the city, which is sort of the point in a series that’s starting to feel like each new installment could be filmed anywhere.