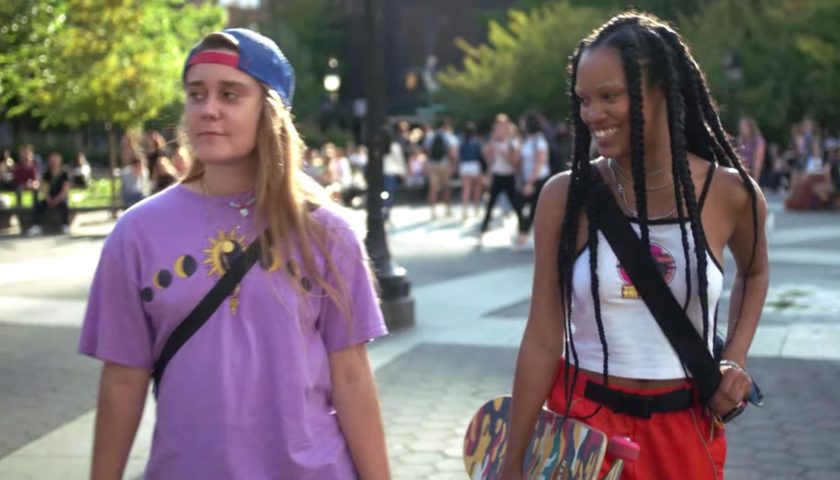 “Betty” looks like how being a teenager feels. Shot during a vibrant New York City summer, the show zips alongside its characters as they weave through traffic, across parks, over bridges on their skateboards. When it slows down, it’s to take in the view, have a laugh, shoot the shit. But within minutes it’s inevitably off and running into the blinking sun again, winding down the city streets with such visceral verve that you can practically feel the wind whipping through your own hair through the screen.

From director Crystal Moselle, the new HBO series introduces a group of freewheeling teens who want nothing more than to just skate on their own terms — a surprisingly tall order thanks to the many skeptical dudes surrounding them. (The show’s title of “Betty,” in fact, comes from the mocking nickname some of the boys throw at girl skaters who dare intrude on their turf.) Moselle enlists several of the same skaters slash actors she did for “Skate Kitchen,” her critically acclaimed film about a pack of determined, self-assured, casually cool girls and the particular freedom they feel when speeding through the city on their boards. Over six half-hour episodes, though, she and writer Lesley Arfin (“Love”) get to not only explore their lives in more detail, but indulge in more visual and narrative grace notes that make falling into the Bettys’ world that much easier and more immersive.

Janay (Dede Lovelace) is sharp and no nonsense when it comes to defending what she loves, but equally joyful when she gets to indulge in it. Her friend Kirt (Nina Moran) is the chillest person in the world — think “The Big Lebowksi’s” Dude in a teenage girl’s body — until she perceives the slightest hint of a threat to her friends, at which point she becomes a bulldog on the offensive. In the pilot, Janay and Kirt stumble into a series of misadventures and three new friends (their transition from strangers to comrades in arms is so fast it almost doesn’t matter — who cares when you’re having that much fun, that quickly?). Honeybear (Moonbear) is a wildly stylish filmmaker who seems mysterious at first blush, but as she becomes more used to her new friends, it’s clear that she’s just smart and shy, more comfortable observing others than being observed. Indigo (Ajani Russell) dispenses weed vape pens and untouchable cool, a strategic hustle hiding her rich girl roots. Camille (Rachelle Vinberg), a skilled skater with a gleaming mop of hair whose style icon is Charlie Chaplin, fits right in, but nevertheless takes longer to admit as much thanks to her lingering need to prove her worth to boys who will never fully embrace her as one of their own.

Every actor is the kind of good that’s harder to absorb at first; they’re so immediately comfortable in their roles and rhythms that the show often feels more like a documentary than a scripted show. But it is, and an especially well-plotted one given that it only has six episodes to give everyone a decently satisfying arc. Camille realizes that clout with the boys isn’t worth pretending that her feelings don’t matter when they’re clearly hurt. Indigo gets a closer look at the difference between her choosing to ignore her safety net and her friends having to scrape by. Honeybear learns how to be vulnerable with both her friends and an intriguing girl at the skatepark who, Kirt helpfully confirms with a giddy yell, “is GAY.” Even Kirt gets a revealing moment of self-actualization, though of course hers comes courtesy of some extremely potent mushrooms. They grow, but in believably awkward spurts. They’re bold as hell, but they’re still kids just trying to figure out themselves and the world around them.

That’s what makes Janay’s storyline, the most ambitious of the bunch, so impressive. When she finds out that another girl has accused her best friend, Donald (Caleb Eberhardt), of assault, Janay goes into a tailspin that starts vindictive, but ends up more cathartic than she ever would’ve thought. The way “Betty” prods this bruise, without pretense or by putting more adult words into teenage characters’ mouths, is smart and compassionate. It has Janay figure out her own feelings without rushing a neat conclusion or simplifying an incredibly complex situation. It lets her be a teen girl, clever and prickly and brittle and brave — a Betty in all the best ways.