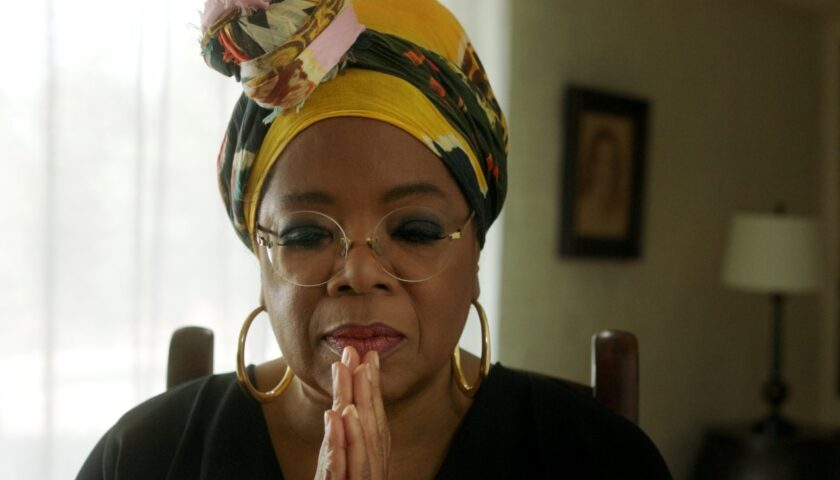 By the time Ta-Nehisi Coates speaks in HBO’s adaptation of “Between the World and Me,” his words have already been voiced by a starry cadre of Black talent. Coates’ recollections, heartbreaks and historical conclusions become monologues performed to the camera by actors like Angela Bassett, Mahershala Ali and Oprah Winfrey herself taking on his prose like a solemn mantle. Directed by Kamilah Forbes of New York City’s Apollo Theater, with archival montages and gorgeous cinematography by Bradford Young, this visual version of “Between the World and Me” is as dense and vast as the book that inspired it.

When Coates first decided to write “Between the World and Me” as a letter to his 15 year-old son, the news was reporting yet another endless cycle of all too familiar stories. “This was the year you saw Eric Garner choked to death,” he writes in the opening pages. “You have seen men in uniform drive by and murder Tamir Rice, a twelve-year-old child whom they were oath-bound to protect…you know now, if you did not before, that the police departments of your country have been endowed with the authority to destroy your body.”

As written, Coates’ visceral, furious fear is both extremely personal and widely applicable. After all, he’s far from the only Black father watching his son absorb the world, in all its baffling hostility. As performed in this televised version by well over a dozen actors (plus activist Angela Davis), Coates’ story necessarily flattens into something broader and more diffuse. It takes a minute to adjust to watching so many different speakers, each filmed in August in their own homes thanks to COVID-19 protocols, delivering different stages of the same story ostensibly from the same perspective. The fact that Coates’ book takes care to remind his son that their experiences don’t run parallel to those of the Black women surrounding them doesn’t factor in here, as many Black women take on his words as their own. There’s something lost in this translation between page and screen that depends upon this many performers; their interpretations are still powerful, but immediately more scattered, and it’s hard not to wonder if a more pared down version might have been even more effective. And yet it’s even harder to imagine which speakers should get cut, as nearly all convincingly ground themselves in the material. For example: Bassett on the futility of the “American Dream” is thoroughly commanding, Ali on falling in love is downright mesmerizing, and executive producer Susan Kelechi Watson is very compelling in her portion on Howard University (Coates’ “Mecca”). When Phylicia Rashad appears to play the role of a mother grieving her son, a college friend of Coates’ whom police killed years ago, it’s difficult to see anyone else trying it.

Throughout the book, modeled in part after James Baldwin’s “The Fire Next Time,” Coates shares with his son the experiences that disillusioned him to “the Dream” that white suburban kids got to live out while he dodged systemic violence in Baltimore. He weaves a damning portrait of his country, built on the literal backs of his enslaved ancestors, and shares his fury and heartbreak at realizing just how little privileged, white “Dreamers” are truly motivated to change it. Reading “Between the World and Me” as a non-Black person, the book is at its most startling and most powerful as Coates consistently refuses to offer his son, or his reader, much hope. “I do not believe we can stop [The Dreamers],” he writes, “because they must ultimately stop themselves.” Coates wrote these lines in 2015. But in 2020, the America he described is all too accurate. “The Dreamers” didn’t stop themselves; they elected Donald Trump president, in the hopes that he’d restore “The Dream” they feel they deserve by birthright.

So, sure, many things have changed in the five years since “Between the World and Me” was published — but then again, from where Coates was writing, not really. Police violence against Black people still happens regularly, still provokes heartbroken outrage, still yields precious few consequences, if any at all. Coates’ book anticipated this, and so HBO’s “Between the World and Me” barely has to change anything in order to remain infuriatingly timely. In fact, the details it does add — Christian Cooper’s phone footage of Amy Cooper gripping her dog while dialing 911, an extended audio interview with Breonna Taylor’s mother — feel tacked on for the sake of an extra underline that the work does not need. Coates’ piercing, frustratingly timeless words are enough.

“Between the World and Me” premieres Saturday, November 21 on HBO