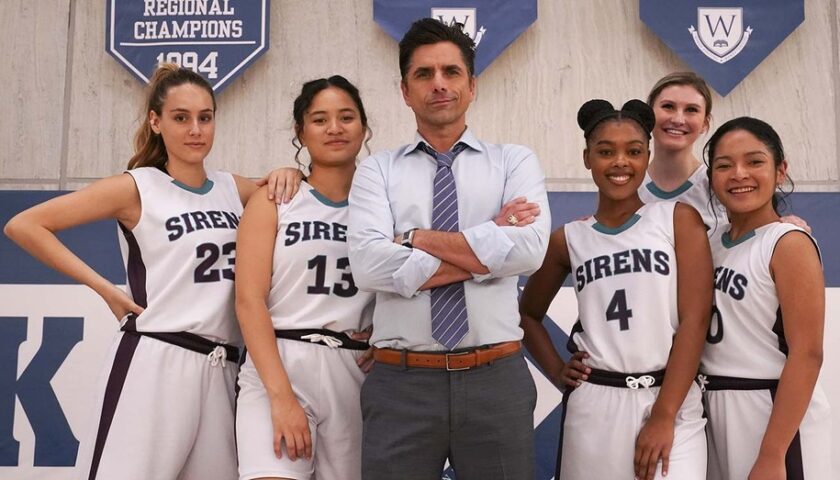 “Big Shot” doesn’t seem to fit among the most-heralded new series on Disney Plus. Unlike “The Mandalorian” or “WandaVision” or even another family-oriented sports series like “The Mighty Ducks: Game Changers,” it is not attached to any existing intellectual property.

But calling it original might be a stretch. This show ably cribs from across the spectrum of kids’ sports movies to tell a story of a mega-successful NCAA basketball coach brought low by his own temper. The stakes here are easily understood and broadly conveyed. “My marching orders are going to echo one you no doubt got from your agent: do not screw this up,” a school administrator (Yvette Nicole Brown) tells the oddly named Marvyn Korn (John Stamos) when he arrives to coach girls’ basketball at a private high school. This seems easily managed. But would you believe that the girls on his team end up teaching him as much as he teaches them?

Or close to as much, at least. Korn has a certain irreducible aggression that often threatens to make the show something more interesting than it wants to be. He tells one player, for instance, that she needs to “shed a few pounds” — a bracing comment from an authority figure leading high school girls, and an intriguing example of real conflict. Korn, accustomed to dealing with college men, and mistreating even them, seems to lack the ability to calibrate his sensibility to appropriately sensitive teen girls.

But then he develops the ability, fairly rapidly, and a potential source of conflict is eliminated. Korn becomes a changed man in relatively short order, and, as if to compensate, the show throws at him a school community that reacts to his on-court ambitions with an exaggerated sense of scorn. His suggestion that his players practice twice a day prompts various teachers to practically foam at the mouth over the uselessness of an athletic program in school, giving Korn an easy win. (To point out that what we’re rooting for is for students to spend less of their time doing anything outside of sports, and that insufficient institutional devotion to the athletic department is hardly in the top dozen problems many American high schools face, might be churlish.) For a show about an ace competitor who finds joy in victory, “Big Shot,” stacking a canny hero against a universe of people who just don’t get it, sure doesn’t mind playing unfair.

This lets the show’s star off the hook. A genial, likable actor, Stamos is unconvincing as a Bobby Knight-esque terror of a coach. It’s little wonder that what we see of his time as a college-sports rage-monster is brief and choppily edited. Someone we’re told was cruel even by the standards of college coaching downshifts easily to, if not cuddly, then at least amiable. Much of the performance is simply being John Stamos. The kids on Stamos’ team have an easy chemistry, but other adult roles tend towards the schematic.

Which is fine: This is a show for kids and their parents to watch together. But one wonders, first, what exact involvement David E. Kelley had in a show that feels so underwritten, and then, why this is a TV show in the first place. It’s not that there isn’t room in the marketplace for pleasant stories about overcoming obstacles as a team — and that team teaching Coach a few things, too. It’s that those stories’ flaws used to be elided by their existing in 90-minute movies, not 10-episode seasons of television. The endless space of streaming allows for a show like “Big Shot” to sprawl, to unfurl further than the story can sustain it. This is above all else, to borrow a phrase from Coach Korn, a show that could stand to shed a few hours.