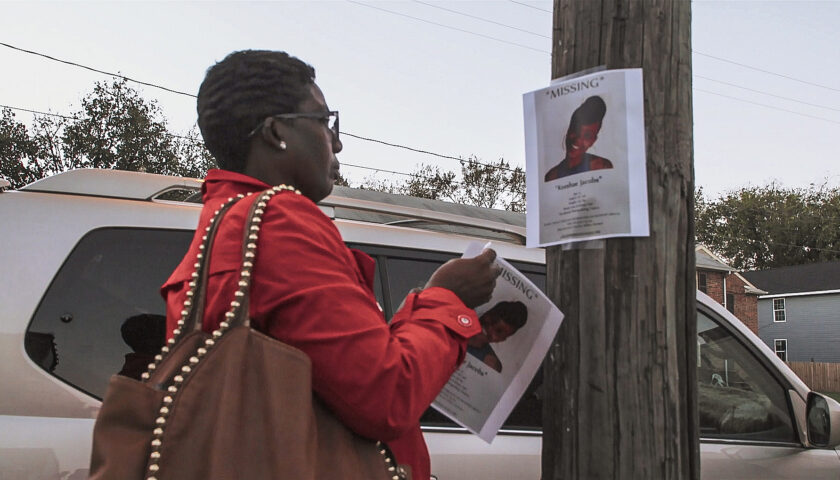 HBO’s four-part documentary series, “Black and Missing” began production three years ago, but makes its debut just weeks after the apex of the two-month Gabby Petito saga. In 2020, nearly 100,000 Black girls and women went missing and few made front-page news; by contrast, there’s a name for the mainstream media’s fondness for constructing and reaffirming the news value of missing white women: Missing White Woman Syndrome (MWWS). The privilege is so omnipresent that it effectively normalizes the marginalization and victimization of other groups.

Produced by Emmy-winning editor Geeta Gandbhir and CNN anchor Soledad O’Brien, this docuseries follows founders of the Black and Missing Foundation, Derrica and Natalie Wilson, in their fight to mainstream Black missing-persons cases. It’s a by-the-numbers production, but it’s both visceral and data-heavy. Audiences will discover that hundreds of thousands of girls and women reported missing each year go unnoticed, many of them African American, Latina or Indigenous. Often presumed runaways, trafficked, or, worse, dead, they are priorities for neither the police nor the press.

According to the FBI, 34% of the women and girls reported missing in 2020 in the United States were Black; Black girls and women account for roughly 15% of the U.S. female population. The lack of attention to their cases has prompted a proliferation of organizations like Black and Missing as well as websites dedicated to the search for these women. They represent the familys’ best hope for visibility — and, absent media coverage and police engagement, the families find themselves bearing the full weight of finding out what’s happened to their loved ones.

“Black and Missing” suggests that working-class Black girls and women at the intersection of race, gender and poverty are the least protected and most invisible. For any series to rail against a media landscape that reinforces racially charged images of “welfare queens,” “crack babies,” and “super predators” is a tall order, and there’s only so much “Black and Missing” can accomplish.

The program highlights several strands that, if fully interrogated, could easily extend the series — the role of media bias, class, poverty, domestic abuse, the Black press, exclusion in feminist theory and practice, sexism, and outright racism, to name a few. But if its goal is to foreground the narrative surrounding missing Black girls and women on a highly accessible platform, “Black and Missing” succeeds. Its approach is barebones, but it maintains true-crime focus. Case details are matter-of-fact while incorporating soulful testimony from families, activists, and historians who have first-hand experience.

Its stories aren’t meant to be twisty, lurid mysteries like Netflix’s widely-popular “Making a Murderer,” so those seeking an addictive watch will be driven by empathy. A pessimist might argue that, in a country that remains divided largely along racial lines, “Black and Missing” may inevitably be a sermon preached to the choir. The series simply can’t compete with near-relentless, blanket news coverage of the Petito case; it’s unlikely to embed itself into public consciousness in the same way.

Gandbhir and O’Brien both have award-winning histories of telling stories with a social justice bent, specific to issues of race, gender and class. In “Black and Missing,” they remain in the background as impartial observers, relying on their subjects to share gut-wrenching journeys of advocacy and sorrow. By keeping these stories alive, “Black and Missing” could galvanize audiences — if not law enforcement — and lead to breaks in the cases it highlights.

The filmmakers never suggest that cases like Petito’s aren’t newsworthy; only that similar cases of Black women and girls don’t attract comparable enthusiasm. Among the complex reasons implicated in the series are unrelenting white supremacist ideologies, societal standards of beauty, and always the bottom-line pressure that rewards maximized TV news ratings.

“Black and Missing” is not the first attempt to bring stories about missing Black people to the fore, and likely won’t be the last. A year ago, HBO aired six-part docuseries “Atlanta’s Missing and Murdered: The Lost Children” which covered a two-year period beginning in 1979 when more than 30 Black children in Atlanta were abducted and later found murdered. Nor is the Black and Missing Foundation alone in its fight; organizations like Our Black Girls and podcasts like Black Girl Gone are also dogged in their attempts to raise awareness.

When ongoing efforts fall on deaf ears and visibility and action are essential, the African proverb “it takes a village to raise a child” is apropos: It might take the collective effort of the African American community to solve these cases and bring closure to families.