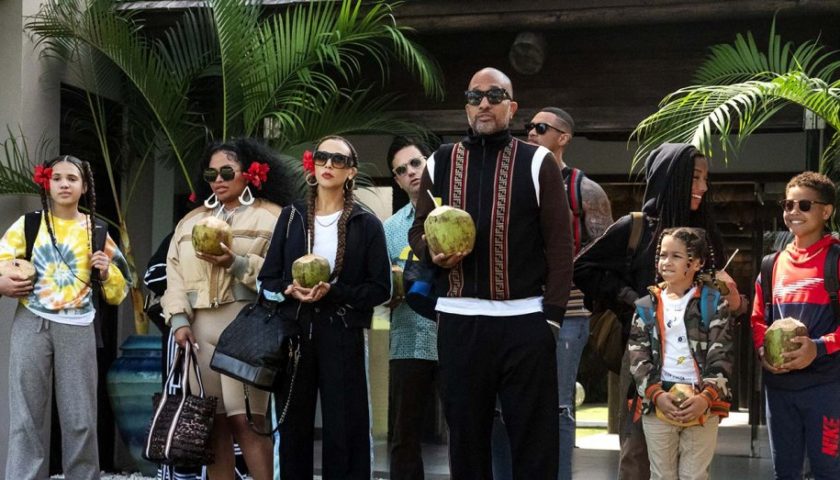 Toward the end of the first season of “#blackAF,” a new series on Netflix, Kenya Barris (as played by Kenya Barris) realizes he may have gone too far. He’s on a vacation with his family in Fiji that he’s done his best to spoil by throwing a tantrum over his wife’s attempt to start a second career; when he finds out she’s working to promote a book she’s written, he’s called her a “horrible person” and a “monster,” and had previously told her she was “the basketball wife version of John Grisham.” He’s told her she’s jealous of his success and told her “you’re such a bad mom… like, a failure” when their teen daughter dyed her hair. (He called that daughter “a little THOT” and later told her she only got into college because he “made a phone call.”) After this season-long barrage of insults, Barris needs some inspiration, so he sits down and watches… “Black-ish,” the show he previously created for ABC. Its depiction of a married couple working together to raise a family even when they disagree brings out something we haven’t yet seen in Barris — genuine emotion. And it feels a million miles away, and not just because Barris is in Fiji.

Barris has, so far in his career, been known to TV viewers as a creative force but not a face: He’s put his thoughts and feelings about family, race, and American life in the era of conspicuous consumption into the ultra-charismatic person of Anthony Anderson, playing a Barris stand-in on “Black-ish.” Now, freed from both the sanded-down edges of network TV and from the burden of having to place his observations into another person, Barris arrives at Netflix having cast himself, with complications and unlikability in full flower. The result is genuinely shocking even for viewers deeply acquainted with what had previously seemed to be Barris’s sensibility: “#blackAF” is the most outright mean-spirited series about family life in memory, and one that seems driven by an impulse toward revealing the worst possible side of Barris’ comic avatar, one that makes the show feel at times cruel to watch.

Barris’ depiction of himself is as someone so driven by drumbeats of loathings that he cannot even hear them anymore as anything other than background noise. (It’s obviously not the actual Barris, but given that this is the first time we’re meeting him and he uses his real name on camera, we don’t have a lot more to go on; the utter absence of redemptive moments also work toward a sense of this show as reflective of its creator’s reality in a way that, say, “Louie” was not.) There’s nothing new about sitcom dads viewing their kids as obstacles (indeed, that’s often what they are to Anderson’s character on “Black-ish”) but here, something nasty is at work. “This is why I never do anything with you guys,” Barris says after a minor frustration. “You’re just a living, breathing set of problems.” Work is little better — though he suggests that his wife, played by Rashida Jones (who deserves better) is jealous of the fact that he loves what he does, it’s not clear he cares much about anything other than using the writer’s room as a place to complain about his family. When a writer (Angela Kinsey) reminds him, mid-monologue about how Barris’ life is terrible, that she needs to leave early that day to attend a function at her son’s school, he replies, in full:

“I get it, you’re a mom who has a job and you’re trying to manage both of them. That’s admirable, you know what I’m saying? You’re not managing this one great, but I feel like, I’m also into the fact that you probably made an agreement with your husband, and you’re sticking to that. You’re not sticking to this one, great, but it’s cool, do what you need to do.”

I think it’s worth seeing Barris’ character’s banal nastiness in its full context in order to understand just how he’s chosen to represent himself — as a proudly domineering boss whose life is measured by others’ fealty to him. (He stands firm in his decision, and we never revisit this incident, or the issue of what it means to set the tone for a workplace, again.) The full effect is hard to convey in print given that Barris, not an actor and not close to becoming one, tends to deliver each line in the same flat and affectless tone, as if impatient for his scene partners to be cleared from his line of sight. The reader will have to imagine compounding the endless meanness of the lines as written with the manner of someone who just wants the shooting day to be over. Here’s a couple more examples: Another of Barris’s writers, a black woman who tends to speak up about the room’s generally broken tone, is cut off by Barris telling her she’s “a diversity hire”; when Barris’ family fails to thank him appropriately for hiring a private jet to fly them to Fiji, he spits, “OK, go f—k myself, I guess.”

It’s this last plot point that gets at the bizarreness of “#blackAF.” The show, absent soul or love, lards itself with luxury goods — a strange decision in an era where the audience’s awareness of celebrities’ financial status relative to viewers’ has not been as piquant in a generation. On “Black-ish,” the family is wealthy and materialistic, but at a recognizably human scale and for character reasons that track: A generation removed from privation, they can tend to go a little overboard. There’s overboard and then there’s this show, in which the family sneers at anyone who lacks what they have. Explaining why first class is not good enough, Barris tells the camera, “I kind of feel like the people in the back of the plane are animals now. That’s like a cargo hold.” The Fiji vacation is laughably extravagant and yet — transpiring in among the world’s most beautiful places — unimaginatively shot, with the camera holding on bottles of Moet champagne longer than on the blue water and white sand Barris traveled half the globe to find. If “Black-ish’s” commodity fetish is at times aspirational — hey, Anthony Anderson’s sneaker collection is enviable — this show plays sadder than it even knows, depicting lives and intellects choked off by big piles of stuff.

Elsewhere, Jones’ Joya hires a smoothie truck for her kids’ baseball game and, asked why she didn’t just bring the traditional postgame dessert of orange slices, guffaws into the camera. The framing device of the show — used itinerantly — is that one daughter (Iman Benson) is shooting her family as an application to film school; the show opens with the revelation that Barris dropped upwards of $50,000 on her camera equipment, but she still seems grounded and relatively real, at least compared to her younger siblings who, we’re shown, literally cannot believe the family did not always have silent, ever-present domestic help. Eventually, though, even she gets in on the act, saying to the camera: “Rarely do I give my parents credit for anything. But Fiji? Why did it take us so long to come here?” It’s as though the only thing that held her back from going to a private resort in a remote corner of the world was not having had the idea. (What a great college application line, in an era in which millions have their lives defined well into middle age by crushing student debt. Lots of luck, little Barris!)

Acquisition is the only thing we see the show’s characters — from Barris on down — meaningfully care about, and the only thing about which the show has a real point of view. Given endless amounts of money and freedom by Netflix, Barris chose to make a show about… how cool it is to have endless amounts of money and freedom, and how well, if fleetingly, they can distract from a life that is made miserable in part by the endless quest for more. Contra its title, “#blackAF” has little to say about any issue, at times diffidently beginning an episode with a plainly stated question like “What does it mean to separate the art from the artist?” that is eventually abandoned in favor of more roasting of the Barris family members by its teed-off patriarch. This is especially galling given what genuinely fine work Barris did with “Black-ish” in working through issues large and small on the American scene; it’s as though, freed to really write about himself, he narrowed the aperture so small as to let nothing in besides his resentments.

The show’s random conclusion — after a season’s worth of berating his family to the point of verbal abuse, Barris inspires himself to accept what he sees as their shortcomings while changing effectively none of his behavior — could have within it the stuff of thrillingly dark anticomedy. Here, after all, is a character who cannot see himself, as written, perhaps, by a person who sees himself all too well. (This, at a far less pitched level of invective, is the comic engine of “Curb Your Enthusiasm,” another show whose creator plays a petty, vituperative version of himself.) But the show’s closing argument is that Barris calls his family pathetic losers to bring them closer to perfection. As his filmmaker daughter tells us: “Just like countries fight to build a better world, families fight to better each other. It’s healthy.”

This remark badly misunderstands, for one thing, why wars happen, and also what the psychic toll of endless fighting actually is — incidentally enough, for the audience too. The viewer who makes it to the end has seen hours’ worth of a person perpetually berating everyone around him for failing to meet his standard even as we see him do nothing to prove he lives up to it as a father, a husband, or as an artist. While Barris-the-character and Barris-the-person are different, the show also raises real questions about Barris’s skill as a creator of television when not hemmed in by the sort of guardrails that exist to protect artists from themselves. “Black-ish” has, historically, been a really good show in part because of those guardrails. “#blackAF” is a fiasco only interesting in the degree to which it detonates and, retroactively, somewhat spoils Barris’s work so far. One wonders where Barris can go from here, and who he’ll manage to blame.