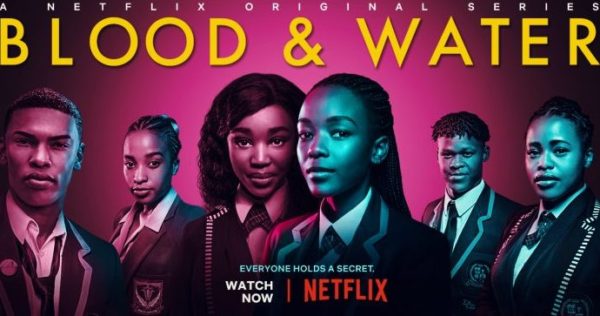 Earlier this year, Netflix chief content officer Ted Sarandos and a team of executives traveled across the African continent, meeting with local creatives, as part of an aggressive content expansion into areas that are still relatively untapped sources of talent. Sarandos did so as the streaming giant’s first African Original series, the spy drama “Queen Sono,” was released worldwide. Now its second African Original series, the teen mystery/drama “Blood & Water,” premieres on May 20. And like “Sono,” it’s regrettably pedestrian. It has “Euphoria” aspirations, but instead settles for the after school special-esque melodrama of “Beverly Hills, 90210,” except it’s set in a part of the world that rarely gets this kind of high-profile, international exposure on screen.

The series stars Ama Qamata as 16-year-old Puleng Khumalo, an intelligent, proactive and impulsive teen on a mission to find her long-lost sister. Unfolding in the surroundings of Parkhurst College, the prestigious school for elite scholars and academic overachievers, “Blood & Water” follows Khumalo’s exploits as she engineers her transfer to the school to investigate the 17-year-old cold case of the abducted-at-birth older sister she’s never met.

Khosi Ngema plays the popular, beautiful and alluring Fikile “Fiks” Bhele, who just might be the missing sister. As a teen drama series created entirely by Africans, with a diverse African cast, and produced on a Netflix budget, “Blood & Water” is certainly something of a novelty that will likely draw audiences for that reason alone. But, in the long run, it’ll need to rely on more than its landmark arrival in order to stay relevant and stand out in a world awash with content.

The series really ought to be retitled “Secrets and Lies,” because just about every main character is concealing something from family and/or friends — and the revelation of each something would all but end the series within a couple of episodes. Of course the drama is instead drawn out over six roughly hour-long chapters, although they will leave viewers mostly apathetic.

The family skirmishes and confrontations are recognizable, but captured so unremarkably, so as to render them nowhere as aching as they are likely expected to be. And that’s unfortunate, because there is a lack of emotional clarity. It doesn’t quite know what exactly it wants to be. And if you have some experience with African television you may find “Blood & Water” unsatisfyingly non-committal, as a lukewarm attempt to dress up a mild Western-style drama.

If the series has a star, it’s unfortunately not Qamata. Instead, filmed in Cape Town, South Africa, showcasing Capetonian life, it’s the splendor of its many plush locales, captured in a way that most of the world rarely gets to see of an African country. African content creators don’t often get to tell their own stories with the kind of budget that a studio like Netflix can provide — even though they aren’t on par with the budgets of average American series — and “Blood & Water” maximizes whatever amount of money the streaming giant allocated to its first season. It captures an Africa that might be a shock to some audiences in the West, who are used to very specific, limited depictions of the continent and its people.

Against this lush and at times frenzied backdrop, the performances are mostly competent, although the relative inexperience of the younger actors compared to the veterans is evident; their delivery of dialogue at times clunky. But it’s beautifully shot, with an attractive cast that look like they just walked out of a J.Crew catalogue, and the central mystery — whether Fikile is indeed Puleng’s long lost sister — is what drives the season forward, and what audiences will likely care about most.

We get the predictable answer at the very end of the sixth and final episode, but the path it takes to get there is  circuitous, with numerous subplots that include infidelity among secondary characters, sabotage, romances and roller-coaster friendships that really aren’t all that fascinating. Honing in on Puleng’s investigative work is where the series is most enthralling, but it doesn’t follow through well enough to keep the viewer fully engaged throughout. Your patience will be tested.

Overall, it wants to project edginess, with a reasonable amount of profanity, alcohol and drug use, as well as frank sexual situations that aren’t typical in teen dramas, unless it’s on HBO and stars Zendaya. The payoff isn’t entirely worth the trip. The series could have worked as a thriller if it prioritized the darker themes it attempts to tackle. Instead, what it offers is a rather facile teen melodrama that doesn’t pack much of a wallop. It’s pretty kids from mostly wealthy families, attending elite schools, dealing with high class problems. It’s very soapy, but not quite addictive, ending with a cliffhanger that all-but screams a second season is as inevitable as Thanos.

Rounding out the main cast are Thabang Molaba as Karabo’ KB’ Molapo, the resident bad boy and high school heartthrob struggling to live up to his father’s high expectations; Puleng’s ally and assistant investigator Wade, played by Dillon Windvogel; and the opinionated Wendy Dlamini, who at times is a bit too “woke,” played by Natasha Thahane.

“Blood & Water” joins other Netflix teen drama offerings like “On My Block,” “13 Reasons Why,” and syndicated CW staples like “Riverdale,” on a platform that seems to have found a solid niche in exploring the everyday lives of teenagers, in all their temperamental glory.

And with that, it will likely find an audience. After all, South African teens deserve on-screen representation as well, even if the series spins its wheels. Encompassing a sprawling cast, it inevitably does, but there just aren’t many other teen shows available globally with a cast that looks and sounds like this one, set in a country that rarely gets this kind of attention on the international stage. For that reason alone, it’s at least worth a look.