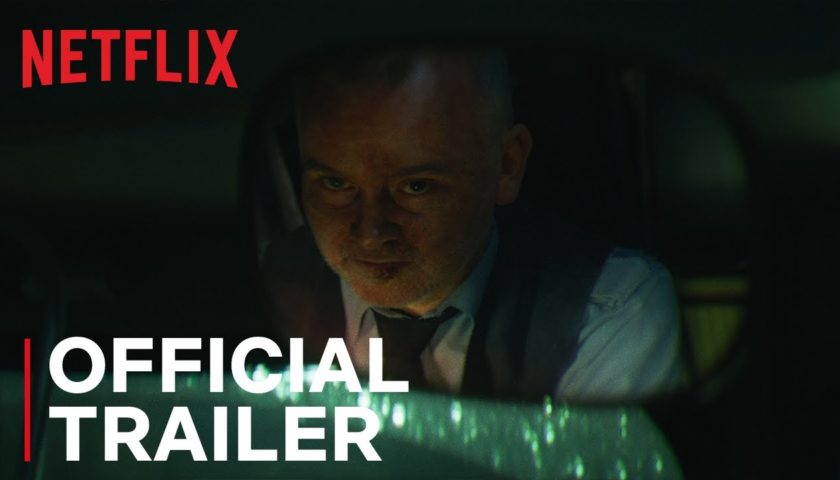 Horror anthologies are tough to pull off; unlike slasher films, they need to develop at least a little bit of character before letting the blood fly. Many use humor to build that character. But if the episode isn’t funny and doesn’t make characters at least a tiny bit relatable, it just feels like a gorefest without purpose. How does the new Norwegian horror anthology Bloodride pull this balance off?

Opening Shot: We see a bus, driving on a dark and stormy road, filled with different people heading towards a creepy destination. Two of them are a father and a daughter, the latter of which holds a cat. Another is a woman staring at the blood on her hands.

The Gist: Bloodride (original title: Blodtur) is a horror anthology that infuses its stories with what Netflix’s description calls “morbid humor”. In the first episode, a journalist (Dag Håvard Engebråten) approaches an office building, about to do the first interview with the CEO of Hartmann Finance. We flash to five years ago. The Hartmanns — Molly (Ine Marie Wilmann), Leon (Bjørnar Teigen) and Katja (Emma Spetalen Magnusson) — are moving to a country house because they’ve come into some financial difficulty and couldn’t afford living in the city anymore. Molly is not happy about this, and when Leon tells her they can get back to the city in five or six years, she gets even angrier.

Her discomfort with being in the country is enhanced by the presence of their neighbors, who hover over their move-in, and then decide to invite themselves and the neighbors over to help them fix up the place and have a barbecue. Molly notices that the wife in the couple is constantly holding and caressing her cat. When all the neighbors come over, she wonders why a) they all have time to come over on a Monday afternoon, and b) why they all have various kinds of pets that never leave their sides.

When she’s jogging in the woods, she finds her neighbor and another local resident bringing the neighbor’s cat to a blood-streaked rock in the woods, where they end up killing it. When they see her, they explain that the town is built on a Viking burial ground, and the rock is used for sacrifices. If you sacrifice an animal, riches come your way. But they warn her not to get too greedy or else bad things will happen.

Molly, looking for a fast way out of this weird town, soon finds a rat in her house and kills it on the stone, runs to a store to get a scratcher, and gets annoyed when she only wins 7 bucks. The women tell her it has to be a beloved pet. She then reluctantly kills Katja’s beloved dog, but the lotto ticket she gets afterwards only yields a few thousand dollars. She reluctantly tells Leon what she did, and then leads him out to the woods so she can show him the dog’s body. But we know that’s not the only reason why they’re out there…

Our Take: Bloodride is trying to navigate a tricky format, and depending which episode you watch, your mileage may vary (bus pun intended). I chose to watch “Ultimate Sacrifice,” and if this episode is an indication of what the rest of the episodes will be like, it’s not a good sign.

The format is tricky because it’s designed to balance horror and dark humor, along with building character and motivation, all within the space of around 30 minutes. It’s just not that easy to do in the best of cases, and the episode I watched is a big reason why.

We get a crumb of background on the Hartmanns and why they’re moving to the country. There’s a hint that a fair amount of the family’s financial problems are Molly’s doing; at the very least, Molly spent without regard to how bad their finances were, making things worse. But we get a scene or two of Molly going “This place is weird; I don’t like it,” and Leon reassuring her that the weirdness is just friendliness, and then she’s suddenly killing animals.

By the time we get to this point, all Molly looks like is a greedy narcissist. There’s very little to no deliberation over killing the dog, despite the fact that her daughter loves it more than anything. Then, when the dog didn’t work, she knew she had to sacrifice someone she loves. Considering there weren’t many other places to go, the story became predictable. Even the twist at the end wasn’t all that surprising.