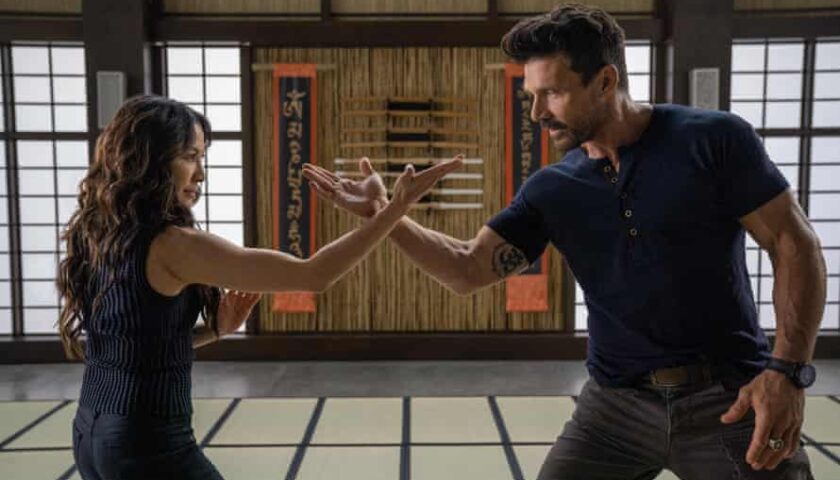 Okay: It’s getting a little ridiculous with the time-loop movies, right? Unless you subscribe to the movies-mirror-reality idea, in which stories of waking up every day to an uncontrollable but numbingly familiar set of horrors feel about right. Falling rather low on the wit spectrum for this genre but high in terms of action, Joe Carnahan’s Boss Level plays up the ways these movies resemble video games — all the way from its title and 8-bit opening credits to the giant roster of eccentric but two-dimensional baddies trying to kill its hero. Don’t expect any surprises as that hero churns through the no-names to get to the big villain.

Any moviemaker jumping on this trend, of protagonists who get killed over and over just to be reborn inexplicably, should at least get some Meta points for casting the seemingly uncancel-able Mel Gibson, as Carnahan does here. Fortunately for viewers who’ve soured on the onetime A-lister, Gibson’s just the top bad guy, not the protagonist whose daily routine we learn over the course of many near-identical iterations. That would be fanboy-favorite tough guy Frank Grillo, who plays a washed-up Delta Force vet named Roy Pulver.

Roy’s a drunk these days, and long ago lost his one true love Jemma (Naomi Watts), who hasn’t even told their son Joe (Rio Grillo) that Roy’s his father. But he has kept in shape and maintained at least one superhuman skill: It doesn’t matter if he’s just waking after a night so booze-soaked he couldn’t even cavort with the stranger sprawled next to him — Grillo’s trademark upswept hair will be immaculate.

Roy has awakened next to this same stranger over a hundred times when we meet him, regaining consciousness just before an intruder tries to slice his head off with a machete. By now he knows when to duck, where to step, and when to expect the machine-gunner in a helicopter to swoop by and destroy what’s left of his apartment. Yawn. The real action’s on the streets, where for some reason (it’ll never make any sense; just approach it like a game) a dozen or so assassins come at him from all angles. He’s never made it past 12:47 p.m. alive.

Flash back to the day before all this began. A weird encounter with his ex-wife, a scientist, shows us she’s building some immense and clearly dangerous machine for a boss (Gibson) she should’ve worried about from the day he said “call me The Colonel.” Jemma is trying to communicate something to Roy, but he’s not getting it. Still, the Colonel’s paranoid enough to get his security chief (Will Sasso) to sic a whole lot of killers on him. Cue the ever-repeating machete wake-up calls.

Roy gets out of his rut of lunchtime executions when he bumps into Joe and confronts the gift all time-loops give: He may have to die violently over and over, but he has an infinite number of afternoons to get to know his son. (Stupidly, the film counts the days, forcing us to note how unlikely Joe is to acquire both fatherly intimacy and master-level swordsmanship in what amounts to two months.) Once he’s a better man, maybe he can figure out how to stop Jemma’s machine from destroying all of spacetime.

This is all passably satisfying, but would be vastly better if the screenwriters weren’t lazily explaining every single detail in voiceover. Grillo generally excels as a man of few words, but here his disembodied voice is a wall-to-wall shag carpet, dampening the fun we’d be having if we could just focus on the mayhem Carnahan delivers. Be assured, there’s nothing here so complicated, profound or funny it couldn’t be worked into the picture’s action and dialogue. Roy’s not the only guy who could do a lot better if given another chance.