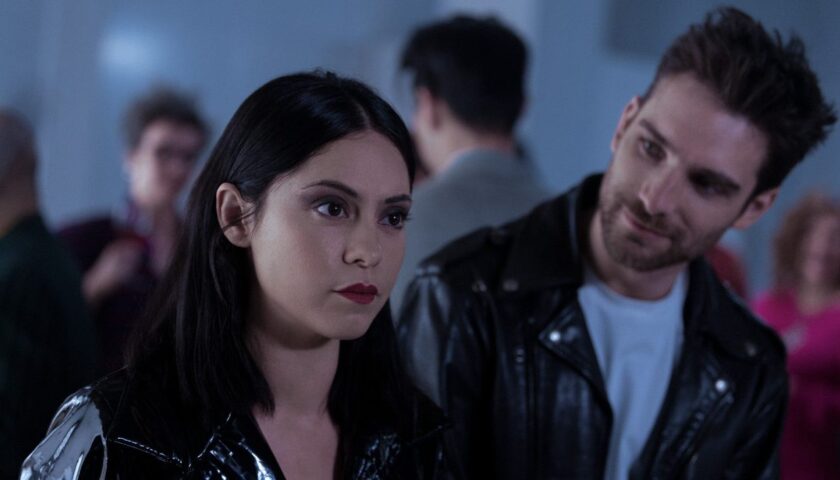 “Brand New Cherry Flavor” takes place roughly 30 years ago. If the murderer’s row of college radio deep cuts didn’t eventually tip you off, the on-screen setup puts the new Netflix show somewhere in the “early ’90s.” What transpires after that simple introduction is a meticulous, slow-motion fever dream, one that transpires with the occasional help of pay phones, VHS tapes, and print headlines.

The new limited series has plenty more on its mind than aping a particular time and place. “Brand New Cherry Flavor” carries all the psychological trappings that come with the curdled glamor of Los Angeles, but this is a specific kind of Hollywood story; one that exists in its own self-contained universe, detached from a conventional decade-signaling aesthetic. Very quickly, the show establishes its primary concern isn’t enduring stardom or lavish luxury. It’s a supernatural revenge tale brought on by what’s ostensibly a simple legal dispute.

Lisa Nova (Rosa Salazar) is an aspiring filmmaker, arriving in L.A. armed with an air of directorial confidence, a creeping sense of paranoia, and a killer calling card of a short film that quickly lands the attention of ethically murky producer Lou Burke (Eric Lange). When the promise of furthering her artistic vision doesn’t quite come to fruition, Lisa’s first stop isn’t the DGA. Going off little more than ethereal suggestions and the same kind of impulses that guided her short, she consults a mysterious woman (Catherine Keener) with a very particular way of helping Lisa get what she’s looking for.

Series co-creators Nick Antosca and Lenore Zion are both alums of the Syfy anthology series “Channel Zero,” a perfect primer for their latest project’s hazy blurring of real-world trauma with more mystical dangers. (Antosca created both series, while Zion worked on the last season — the one haunted by a childhood imaginary friend come to life.) Industry horror stories turn out to be just as fruitful as ones birthed from the internet, with “Brand New Cherry Flavor” taking on the same kind of reality-puncturing developments that don’t need an explanation to be terrifying. The longer the story goes, the more the pretense of a conventional drama falls away.

In the process, few series this year prove as adept at translating stress into visual form. Whether by shades of degrees or through a kilowatt jolt of nervous energy, “Brand New Cherry Flavor” feasts on the insecurities of both character and viewer, even as it veers toward a brewing showdown that covers far more than rights of first refusal. Pilot director Arkasha Stevenson (another “Channel Zero” alum) and the rest of the season’s directors (Gandja Monteiro, Matt Sobel, Jake Schreier, and Antosca) each offer their own ever-so-distinct takes, each insidious in their own way and bathed in a lava-lamp rainbow palette that drives home the dreamlike feel of this particular rabbit hole. Credit also to DP Celiana Cárdenas, whose camera never moves along the same plane twice, taking in as much of this world’s detail as possible without taking focus away from the key developments happening within the frame.

It isn’t an all-encompassing world on display in “Brand New Cherry Flavor.” Before long, this metaphysical tug-of-war draws in a movie megastar (Jeff Ward), though his presence is less about establishing any fictional on-screen talents than setting him up as a willing accomplice. Still, when the show needs to be specific, it does so with skill. Lisa’s short has to be this tractor beam of an artistic object, luring in big-shot producers and above-the-title talent. Unspooled in snippets throughout the series, it’s recognizably a student film, the kind of work conjured after a steady diet of Maria Falconetti, Cindy Sherman, and Luis Buñuel. Yet it’s haunting in its own right, in a way that shows the power Lisa has over everyone who stands in her way, even when she’s not in the room. The whole thing doesn’t come into focus until well after things in Lisa’s life begin to spiral, and there’s a tactile nature to what’s in those few minutes that gets mirrored in these eight episodes’ most unforgettable sequences.

After “Undone” (a 2018 Amazon Prime Video gem ripe for discovery in its own right for those who haven’t caught it yet), “Brand New Cherry Flavor” marks yet another series Salazar is able to carry, even through some taxing performance demands. The sheer physicality of Lisa’s trials — some pain meted out in otherworldly forms and still more in ways frighteningly real — are tall enough a task. To be able to shade the moments in between with the kind of alternating bewilderment, exasperation, and resignation that marks Lisa’s rocky road to reclaiming her own work (and body and life) is proof of a skillset that few other actresses would be able to bring.

Her on-screen sparring partner Lange is presented with plenty of Lou’s ordeals, too. To watch him slide in and out of scummy producer mode, all while slowly losing grip on the control that he feels his status in the industry implies, is a fascinating parallel arc. Lange arrives channeling some of the best ‘90s Michael Keaton energy since ‘90s Michael Keaton — where Lou goes from there is a case study in eliciting a certain kind of blunted empathy for a character who arguably deserves it the least. Keener remains an enigma throughout the series (and necessarily so). As Lisa tries to parse out who this woman is and what she’s really after, the matter-of-fact way that Keener presents an escalating series of gnarled details and directives is chilling in its own right.

Through the swirling storm of alliances and oaths and performative rituals both pagan and showbiz, “Brand New Cherry Flavor” is fragmented without being incoherent. The idea of healing becomes an emerging theme over the course of the series, and it’s almost as if this hazy narrative is a collection of broken bones trying to set itself back into place. As the past and present start to converge, there’s a distinct sense that these characters, as they lose their ability to track certain rules and consequences, are gradually giving themselves over to whatever fantastical turn this story takes.

Whether it’s Lisa or Lou or anyone else swept up in their battle of wills, there’s a particular kind of inconsistency in the way that characters respond to the disturbing, absurd developments surrounding them. At times, these oddities are accepted at face value, tiny trip-ups in reality that can be explained away by bad coke or just Hollywood being Hollywood. Watching that relative nonchalance melt away as these curious developments get stranger and stranger is part of what gives the show its magic. In a showbiz-centered story rife with metaphorical possibility, the overarching theme seems to be what you’re willing to endure and to whom you’re willing to bind your fate. Rarely has a story about a movie proven the old adage that “no one knows anything” quite like this.