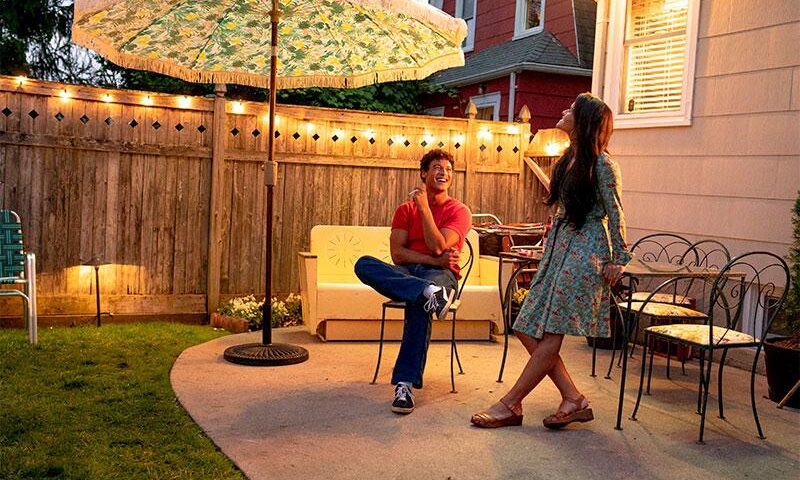 Intent on living up to its name immediately, “Bridge and Tunnel,” starts with a young couple bursting into a dingy bar bathroom to have reunion sex on the sink. Jimmy (Sam Vartholomeos) and Jill (Caitlin Stasey) split long ago in their short lives, after she identified that they were headed in opposite directions. Jimmy has a one-way ticket out of town, after landing a coveted photography job with National Geographic, while Jill is happy to bounce back and forth between their small hometown in Long Island and the big-city life in Manhattan, as she patiently figures out what’s next. But, as young love tends to do, their attraction brings them back together for one more night in the local tavern’s single occupancy bathroom.

Will they stay together? Will they break up again? Will they harbor minor or major regrets over whatever decision they ultimately make, only to look back on it in 20 years and wonder, “What if…?”

Stop me if you’ve heard this before — actually, don’t. Yes, “Bridge and Tunnel” dwells heavily on the common coming-of-age choice between professional dreams and personal happiness; the first four episodes repeatedly consider whether it’s best to stick with what’s working and live a happy, simple life, or run blindly toward your unexplored passions, not knowing where you’ll end up (or with whom). But writer, director, producer, and co-star Edward Burns evokes enough gravity in this choice, and argues both sides with enough conviction and from enough varied perspectives, to make it worth pondering all over again.

Set in 1980, the six-episode first season focuses on six main characters who are all recent college grads looking for work in the real world. In addition to Jimmy and Jill, whose relationship is the kind of vortex in a friend group that sucks each member into their issues, there’s also Stacey (Isabella Farrell) and Mikey (Jan Luis Castellanos). Whereas the bathroom reconcilers’ coupling is based on pure, romantic bliss, Stacey and Mikey are driven by innate attraction and self-indulgent drama — they may have gone to prom together, but they each left with different people. Years later, they’re repeating the same cycle: Stacey is living with a guy in Manhattan, but that only spikes Mikey’s interest in her (and her interest in him).

Waiting in the wings is Tammy (Gigi Zumbado), a waitress who’s always had a crush on Mikey, but doesn’t want to break the friend code by pursuing Stacey’s ex. If she’d just go for Nick “Pags” Pagnetti (Brian Muller), then the whole group would be coupled up, but he’s a bit too desperate to be desirable. Pags is waitlisted for law school, unlucky with the ladies, and upset his guitar-playing sister and single mother are more content in their Long Island lives than he can be.

Admittedly, “Bridge and Tunnel” spends more time in the men’s mindsets than the women’s, but a) it’s early going, so a shift in focus could still happen, and b) none of these characters are entirely autonomous. The series is a group hang, through and through, made all the more enjoyable by good music, subtly evocative ’80s settings, and a cast exclusively made up of protagonists. (Really, there’s no villain here other than time’s arrow.) For those not on its wavelength, the series can feel like an overinflated film script carrying little consequence. But its general pleasantness mostly makes up for the redundancies, and to say not much happens in each efficient half-hour entry is both an understatement and largely beside the point. The setting is purposefully purgatorial, in that not only are they all waiting on something, but they’re all torn between committing to a future somewhere else and enjoying the last time they’ll all be living in the same town, on the same block, with the same trivial responsibilities.

Despite being a period piece, recent generations should have no problem identifying with these paralyzed characters, all of whom are on the precipice of a decision but can’t quite commit. For millennials and Gen Z viewers, that should be deeply relatable. Not only have we pushed back the start date on “real life” by a decade or so, but an endless array of options, be it what food to get for dinner or which prospective partner deserves a right swipe, has left many decision-averse. Call it prolonged adolescence, arrested development, or simply shifting priorities, but these kids’ reluctance to commit should only make them more identifiable to modern audiences.

Still, Burns doesn’t let the show drift off into boyish hijinks. Billed as a “dramedy” by Epix, the longtime filmmaker’s second TV series (after TNT’s 2015 drama “Public Morals”) isn’t trying to be laugh-out-loud funny so much as thought-provoking. To that end, the quadruple-hyphenate’s onscreen role runs in parallel to his offscreen function: As Jimmy’s dad, Artie is constantly yelling at his son to stay focused. He’s adamant about Jimmy not getting stuck in Long Island, and yet, Artie is in a happy marriage, with a steady job, and, even as a long-suffering Mets fan, he carries a stubbornly upbeat attitude. Jimmy hears what his dad is telling him (“Take the National Geographic job! Go to Alaska! Don’t come back!”), but he also sees how well his dad’s life turned out and wonders if he could have the same one with Jill.

Is it just sex in the bathroom, or is there something real here? Is it real enough to last, or is it just real in the moment? Even if it does last, can a lifelong romance make up for unfulfilled career aspirations? These are difficult questions for a young romantic to answer, but they’re just as relatable for anyone lucky enough to have already answered them. Asking “What if…” at Artie’s age is the cause of too many midlife crises — often misguided ones, when it comes to men — so it’s encouraging to see Burns exploring them with healthy, open-minded acceptance and a firm grip on the consequences.