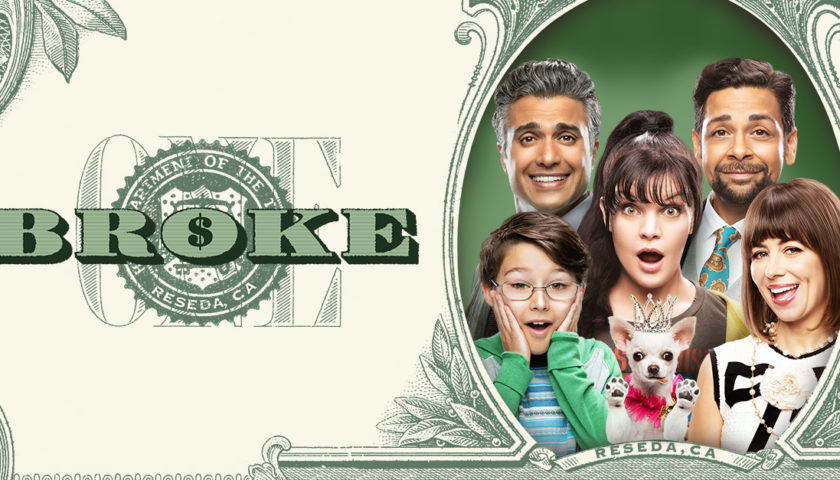 Last spring, the White House and the Dow Jones were telling people the American economy was stronger than ever.

Meanwhile, broadcast networks were in development on a bevy of new sitcoms based on the premise that every extended family is just one medical bill or questionable investment away from being forced to live under one roof.

It doesn’t make any of these shows even vaguely funny, but you’ve gotta give points for foresight and, as entries in this fledgling subgenre go, Broke is probably the best — I’m not saying much here — in covering for its general lack of laughs with some sweetness, for whatever that’s worth.

Broke was created by Alex Herschlag and marks NCIS star Pauley Perrette’s small-screen return. She plays Jackie, brassy single mom to the gifted Sammy (Antonio Corbo) and bartender at a Reseda dive bar. Jackie is living in the house she grew up in and the house is falling apart, so she sees potential salvation when her sister Elizabeth (Natasha Leggero) and Elizabeth’s wealthy husband Javier (Jaime Camil) drop in for an unexpected visit. Jackie is hoping to get a loan to fix things, but she doesn’t know that Javier and Elizabeth are newly broke, which isn’t a spoiler because otherwise the show would be called Whew, At Least They’re Still Rich.

What follows in the three episodes sent to critics is a rather familiar process in which Javier learns and Elizabeth relearns what it’s like to live a life with financial limitations, or as much as you can live such a life when you still have a trusty manservant named Luis (Izzy Diaz), who sticks around because he’s on Javier’s father’s payroll.

I credited Broke as being part of a prescient trend reflecting the fragility of the recent economic bubble and perhaps recognizing in a way too many politicians did not that falling unemployment and soaring stock prices weren’t impacting all Americans equally. That’s an overstatement. At least Indebted and United We Fall have direct things to say about the costs of American health care and superficial aspects of the American Dream.

In Broke, Javier is cut off by his dad after wasting money on dumb things, which makes his predicament fundamentally unrelatable and low-stakes. “Health care costs are crippling the American middle class” or “The pressure of keeping up with the Joneses on social media causes people to spend money they don’t have” are commentaries with teeth. “I bought a pyramid and my dad took away my allowance” is just an excuse for many, many broad jokes about caricatured excess.

In its predictable generalities, Broke is a mass of multicam cliches. In particular, the show can’t find anything amusing to do with Perrette’s character, defined mostly as loud and strident (though entirely supportive toward her son). Perrette, who was often quite funny on NCIS, dabbled in multicam much earlier in her career, but there’s no evidence of comfort within the format, not that anybody was going to be able to milk much from a part meant to embody the Deep Valley ethos of Reseda and little else.

There’s a clear contrast between Perrette’s inexperience and Leggero’s expert playing to the real or hypothetical crowd here, one that isn’t fair since the writers have given Leggero an endless bag of schticks, from an affected accent to a tiny purse dog, while giving Perrette almost nothing.

Broke is a bit better in its specifics. I enjoyed little details like Javier and Luis frequently speaking to each other in Spanish (something I believe the show drops after the pilot). And in general, I found Luis to be the show’s best character, tiptoeing around stereotypes and occasionally dodging them with cleverness.

In his outsized, big-hearted obliviousness, Camil is playing a variation on Rogelio de la Vega, a characterization that fit better with the telenovela grandiosity of Jane the Virgin than in the performative blue-collar space of Broke. Jane the Virgin creator Jennie Snyder Urman is a producer on Broke and co-wrote the second episode; she knows Camil’s strengths as well as anybody, which may explain why the sentimental and affectional scenes with Javier and his bright nephew are highlights here.

With Camil working his Rogelio magic, Leggero pushing aggressively for chuckles, Diaz’s amusingly fresh characterization and fleeting warm-hearted moments, I can see the elements in Broke that might coalesce into something better eventually. But it’s harder, based on the three episodes I’ve seen, to know why I’d want to stick around to see what comes together.