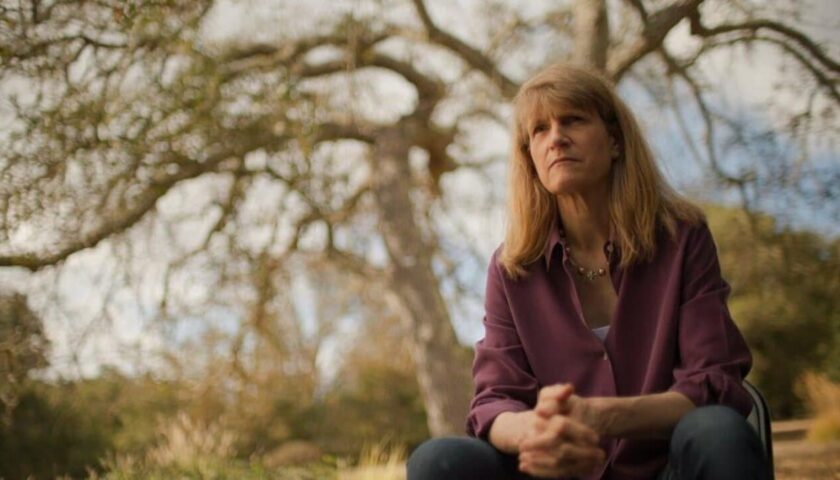 A phone rings. Then we see a tape recorder, and hear a call into the San Mateo County District Attorney’s office. The male voice on the phone hesitates as he describes how his wife suddenly remembers being witness to a murder.

The first episode starts with Franklin taking the stand in her father’s 1990 trial, a compelling figure whose recall of the murder seems to corroborate with the physical evidence the district attorney’s office and the sheriff’s department has. Then we go back to 1969 in Foster City, CA, a growing community sandwiched between San Francisco and San Jose. Neighbors of the Franklins, whether they were contemporaries of Eileen or George, remember him as a gregarious, handsome guy who had a flirtatious streak and doted on his five kids, especially Eileen, who was the most reserved of the group.

Then we hear about the idea of repressed memories, with experts chiming in about how the brain shields itself from remembering traumatic events — like seeing a father commit rape and murder. The directors interview prosecutor Elaine Tipton, DA Steve Wagstaffe, the chief police investigator, and neighbors and friends of George and Elaine.

They also interview defense attorney Douglas Horngrad, who tried to discredit Franklin’s testimony during the trial by trying to get her to admit that the repressed memory was recalled under hypnosis and not, as she claimed, when she saw her daughter’s face and it looked for a moment like Susan Nason.

Guendelman and Pines decide to go the more or less straightforward route with Buried, with extensive interviews combined with archival news footage, footage of the many interviews Franklin gave as she became an advocate for people who have recovered memories, and footage from the trial itself. Reenactments are kept to a minimum, and the ones that are used are hazy and nebulous.

There are a few stylistic hiccups, which we’ll mention below, but for the most part their approach to this case works. This is a case that, for one reason or another, hasn’t resonated in people’s memories as much as some other famous cases that we’ve seen covered in true crime docuseries, so watching the details of this case laid out to us feels like we’re learning something new, instead of rehashing facts we already know. That alone helps the first episode’s pacing, but the directors also don’t dwell too long on the backstory and just get into the meat of the case.

But the backstory will also be important later on as infighting among Franklin and her siblings will eventually lead to George Franklin’s conviction being overturned. What the directors of Buried are doing is pretty smart on their part; they’re bringing us into Eileen’s side of the story, convincing us that her recovered memory was accurate and that she suffered this tremendous trauma. We only hear a little bit from Horngrad, and he at first sounds like the typical defense attorney who will find anything to try to discredit someone who has suffered so much.

But the unravelling of the case, including recanted testimony, omitted information about how Eileen Franklin recalled her memory, and details about the Franklins’ family life, will really be the most intriguing part of the series to watch. It’ll also be interesting to see how not having Eileen Franklin, George Franklin or any of Eileen’s siblings participating in the documentary will be handled as things go forward. There’s so much footage of Eileen in interviews, it may not be necessary, and having her there may have actually skewed things. But her absence will get more noticeable as the story wears on.